The gutting of the former Flaming Saddles space has begun at 8811 Santa Monica Boulevard, on the corner of Larrabee Street to make way for new Fantom Flower cannabis consumption lounge by Where Eagles Fly, owned by Alexander Kardos, Enzo Rossi and actress Patricia Arquette.

A Notice of Public Hearing has gone up by the City of West Hollywood on the side of the building announcing the proposal to permit the sales, service, and on-site consumption of full alcohol (ABC Type 47) as ancillary use to a new restaurant with 520 square feet of outdoor dining by applicant Kevin Brady.

The hearing date is scheduled for July 12, 2022 at 5 p.m. at the City of West Hollywood City Hall Community Conference Room (1st floor) at 8300 Santa Monica Blvd. 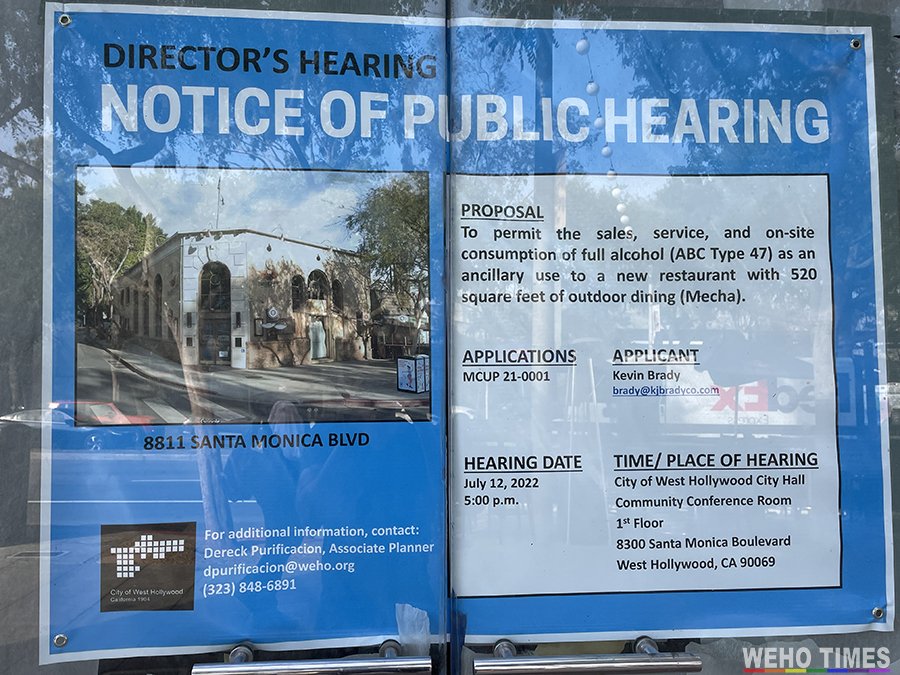 The West Hollywood Business License Commission voted unanimously to grant Where Eagles Fly, LLC a Cannabis Business License for a Consumption Area (Edibles), at the former home of the now shuttered Flaming Saddles space in September of 2021. At that same meeting it also approved the application by Valkyrie Retail, LLC for a Cannabis Business Consumption Area (Smoking, Vaping, Edibles), for the business known as Villa Noble West Hollywood to be located at 8001 Santa Monica Boulevard, Unit A, on the corner of Santa Monica Boulevard and Laurel Avenue, across the street from the French Market Building.

Fantom Flower proposes onsite consumption areas for the consumption of cannabis by smoking, vaping, and ingesting of edible products, located on the second floor of a historic commercial building. The interior lounge area will be divided into two separate areas, a 1,028 sf edible/ingestion only area (non-smoking) and a 936 sf smoking area. The August 2020 code amendments authorize edible ingestion consumption areas to have a smoking area as long as the smoking area is not more than 50% of the premises or 1,500 square feet, whichever is smaller. Additionally, the edible/ingestion only area (non-smoking area) must be of equal size or larger than the smoking area.

The space was said to open in July, 2022, but according to construction workers at the site, the interior is currently being demolished to make way for the new construction. He was not able to provide an estimate of when the construction would begin at the new space.