Three of the injured men were transported to a nearby hospital. Witnesses report a fourth victim was treated by paramedics at the scene. None of their injuries are believed to be life-threatening.

Reporter Jon Baird tweeted this morning that “the 4 ‘victims’ in the #shooting in #WestHollywood this morning are being ‘uncooperative’ with #LASD investigators. They’re all in the hospital. One was found more than a block away, wounded, near an apartment swimming pool. @KNX1070” 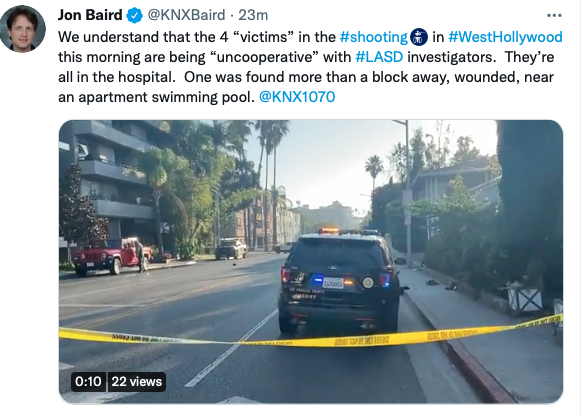 “Crazy night in WeHo” posted resident Michael Thomas on his Facebook page. “At 4:17am the neighborhood awakened to gun shots and helicopters. Tried to go back to sleep. At 5:38, I heard voices below. Got outta bed to investigate and saw they had caught a suspect underneath my living room window! It’s all over the news. Four people shot. CRAZY!”

According to reports, LASD is treating the four gunshot victims as possible suspects in the incident.

NBC Los Angeles reports that no arrests have been announced and the circumstances that led to the shooting are unclear.

Fountain is shut down between La Cienega Boulevard and Sweetzer Avenue while deputies investigate the crime scene and search for suspects and evidence. The circumstances of the incident are still unknown.