The beloved Big Gay Starbucks West Hollywood, located on the corner of Santa Monica Boulevard and Westmount Drive, officially closed its doors forever at exactly 2:00 p.m. on Sunday, July 31, 2022—“Thank you for joining us today, but today is our final day of operations. We are officially done” store manager, Acacia Blenchard, told a group of loyal customers inside the store. “Thank you for allowing us to serve you for 27 years. It’s been wonderful. We’ve appreciated being a part of this community, but on that note guys, I have to ask you all to go.”

I worked the front desk at the Sports Connection when Starbucks Coffee West Hollywood first opened its doors across the street in the year 1995. I was young and too self-possessed to pay attention to the opening ceremony of a coffee shop back in those days. I had no idea the space at 8595 Santa Monica Boulevard would become such huge part of my West Hollywood experience. Truth is, that Starbucks always existed in mind’s eye, and I figured it would continue to live on way past my own existence, so being asked to go for good on a Sunday afternoon was beyond surreal to me. I still need some time to process that I can no longer walk through those double doors and reminisce about the good old days.

And good old days they were.

The West Hollywood Starbucks was my jam. I kept it simple with a Venti Drip. I hung out there almost every day for its first two decades of operations. It was never really about the coffee, or the pastries fresh off the fridge, but more about the social setting on a corner where there was always something happening and something to see while you sipped on some coffee or tea.

Memories take me back to a time when LGBTQ+ meant you were gay, and guys sat behind a glass wall to gawk at the men passing by in spandex short shorts and spaghetti tank tops on their way to the gym (we called it bird watching, IF you know what I mean). It was common to see shirtless guys stretched out on the patio chairs, posing for cameras that weren’t there, way back before God invented selfies. Men made a spectacle on Santa Monica Boulevard while they sunned themselves, giving the Big Gay Starbucks more notoriety with a spot that was dubbed “The WeHo Beach.”

It was a place for cruising before hookup apps like SCRUFF and Grindr ruined our social sexual skills. Guys would do their seductive dances while nursing a cup of joe. Then one guy would get up and the other guy would follow him to the restroom by the pool area of the Ramada Inn a few doors down (or so I’ve been told…cough).

However, the Gay Bux wasn’t always about looking at boys, or hooking up, or being surrounded by friends for hours on end. Many times we’d embrace our inner nerd, and crack open a book and have what I’d call Super Quiet Reading Time, which is telling of how much we loved being inside the Gay Bux.

There are so many memories on that corner. I fell in love with random strangers, I laughed my ass off with the employees at the counter, and no matter how I practically lived there, the baristas always found a new way to jack-up my name.

I also went THROUGH IT inside that place. This is the spot where I nursed my fair share of hangovers the morning after; it was my reliable go-to when I needed a pick-me-up after crashing and burning from a bumpy night of drugs and debauchery during my party and play days; it’s also where I lost some major cool points after I got sober and made it a place to fellowship with local sobers (the full circle of WeHo life).

I’m not sure when my perception of that space changed and the energy didn’t seem the same. I think it dates back to when they decided to fix what was not broken in 2010. They remodeled inside, removed the tables and chairs on the Westmount Drive side, and they added a patio railing that separated sunbathers from Santa Monica Boulevard. It was goodbye WeHo Beach; hello WeHo Corral. It just wasn’t the same.

I can’t pinpoint why I stopped making that space my usual hangout for the past five or six years. Maybe I got tired of seeing the same faces setting up shop and taking up office space day-in and day-out; maybe it was the homeless issues with the screaming man making it impossible to have my Super Quiet Reading Time; maybe it was the closure of 24-Hour Hour Fitness (former home to the Sports Connectiom) and the lack of endorphins that depressed the living hell out of me.

It stopped being my jam, but I always took comfort in knowing that the Big Gay Starbucks in West Hollywood would always be there for me, should I ever want to have a throwback to the good old days of WeHo.

And now the place is gone.

“I haven’t been in a room so solemn since Rock Hudson’s memorial,” said local WeHo personality Bobby Trendy while he waited for the place to officially close.

“It’s a sad, sad day,” said store manager Blenchard right before announcing the closing time, “It’s been a day full of heartbreak. We’ve been saying goodbye to the entire community. So now we’re asking everyone to leave so our partners can have a moment of decompression. We want to say our own goodbyes to this space and console each other privately.”

Whether you believe the place shut down because of safety reasons, because Starbucks corp was making a political statement about defunding the police, or because it was a union bust, none of that really matters in the end. We lost yet another West Hollywood gem.

Adding insult to injury, they didn’t waste any time erasing 27 years of community history. Moments after store manager Acacia Blenchard told customers they had to go, ladders went up in front of the store and the Starbucks letters were promptly removed and the WeHo Corral vanished on Santa Monica Boulevard. 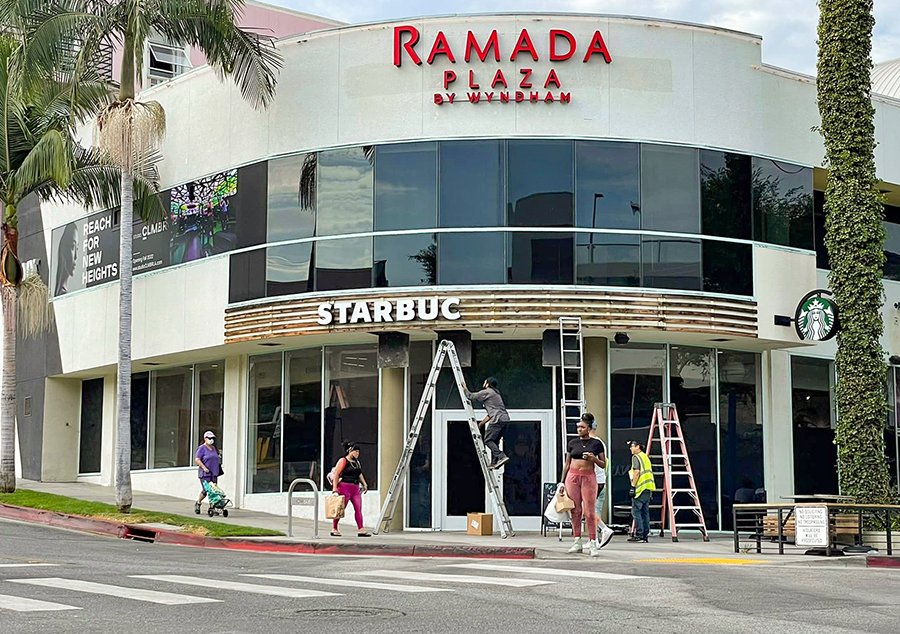 Goodbye Big Gay Starbucks Coffee West Hollywood. Thank you so much for the memories. You join the French Market, Yukon Mining Company, Silver Spoon Restaurant, Coffee Bean WeHo, The Athletic Club, 24-Hour Fitness Sport, and a long list of LGBTQ+ spaces that have been erased from our GPS apps, but will never ever forgotten.

This was an attempt to BUST the Starbucks Workers United (SBWU) Union and, NOT in response to some bogus overwhelming crime problem. The Workers clearly say it’s coercion against labor organizing NOT only for fair pay & working conditions but, opposing any form of democracy in the workplace. What corporate Starbucks is doing should merit our anger NOT our sympathy. As the (SBWU)  Union organizing wave wins over more than 300 Starbucks stores so far, workers allege egregious union-busting tactics including unnecessary closures❗ 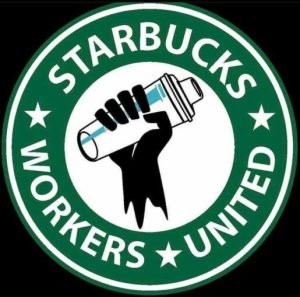 Now that the space has been vacated by Starbucks,who is going to lease that space? It will be a shame if the space remains vacant and solemn looking.

I am sure there is someone out there who is upset and unhappy the gay Starbucks is gone.Why not that person start a new coffee retailer at that spot serving the local LGBT patrons with local tastes and practices.That one man or group of guys can make the space happy again.

Thank you for the excellent writing. While the chronicle was bitter sweet it was a pleasure to read.