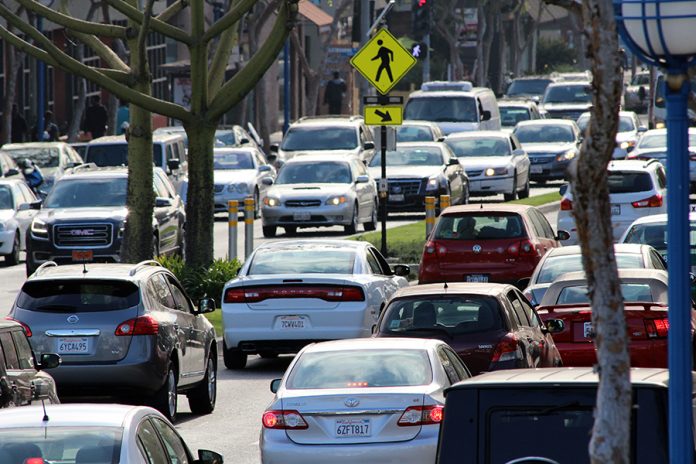 Trump is in Beverly Hills for an evening of fundraising to benefit his 2020 re-election campaign. Air Force One arrived at LAX around 4pm. A number of road closures have been enacted because of the visit on L.A.’s Westside, which will likely impact rush-hour traffic. The Los Angeles Police Department released a list of street closures and restrictions that are bound to result in traffic congestions during rush hour on a Friday evening. Avoid areas West of West Hollywood during his visit.

The LAPD recommends, “the following areas of Los Angeles and Beverly Hills should be avoided when possible to prevent travel delays for community members.” The complete list and times of street closure times and restrictions are as follows:

Closures / Restrictions (no bus routes impacted by the hard closures)

Sunset Boulevard between Foothill Road and Hillcrest Road will be closed from 1-7 p.m.

Foothill, Elm and Maple Drives will be closed between Sunset Boulevard and Elevado Avenue from 1-7 p.m.

The fundraiser is taking place at the home nursing care CEO Lee Samson with tickets ranging from $15,000 to $50,000 for a photo op. Deadline.com reports that big Republican spenders have ponied up $150,000 to join in a 4:45 PM roundtable with the incumbent Friday afternoon, according to the invite.

Trump’s last fundraising trip to L.A. in March 2018 saw the current POTUS snare nearly $5 million for the GOP in a Beverly Hills event. Maybe telling of the worry that the economy is slowing down or a lessening of Trump’s star power among the faithful, the roundtable sit-down at that get together was a stellar $250,000 for tickets.

Trump is expected to fly to Las Vegas after his Beverly Hills visit to make a speech.