“John actually got me out of the house,” Stryker said of Duran. “I hardly ever go out now.” 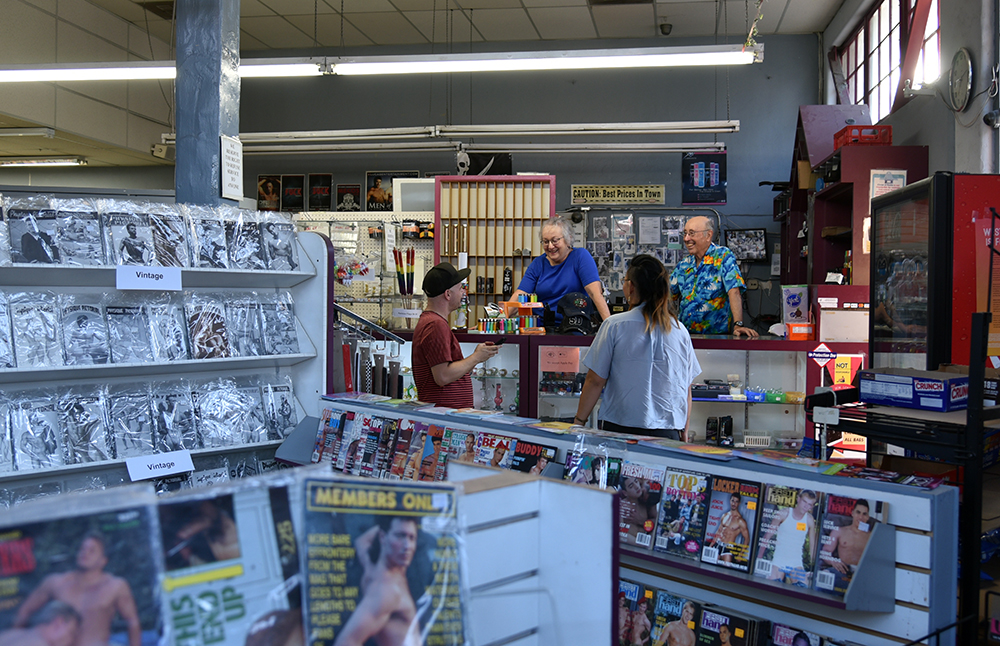 Jeff Stryker is also featured as an interview subject in the up and coming documentary, which is scheduled to be complete at the end of the summer and will likely be released during film festival season next year.

As reported here earlier the screening took place on Sunday, June 15, a little after 7pm as part of Dirty Looks: On Location–a 31-day art, performance and film festival happening throughout the month of July. The event was curated by Marvin Astorgaand Young Joon Kwak.

At the end of the screening Mayor Duran presented the Masons with a proclamation on behalf of the City of West Hollywood City Council for their more than 35 years of service to the LGBT community and for being part of the epicenter for LGBT life and culture in the Los Angeles area. He also pronounced July 15, as Circus of Books Day in the city of West Hollywood.

“Circus of Books stood as a place of free expression and safe haven for the LGBT community through the tumult and trauma of the AIDS crisis, and the battle for civil rights against the moral majority campaign of the 1980s and 90s,” the Proclamation reads in the whereas section. “Unbeknownst to many in the community it served, the store was cultivated and cared for by its owners, Karen and Barry Mason; a straight couple with three children whom they raised in West Hollywood. Karen and Barry Mason fought a hard-won battle for civil and first amendment rights when their store became target of the conservative right; and Karen and Barry Mason cared for many in the community through the AIDS crisis and remained stalwart allies of the LGBT community, as activists with the organization PFLAG. Specifically now their focus is on helping people in the trans community through support groups and political efforts; and the story of this legendary but local family business, is the subject of a forthcoming documentary, which is in post-production and will be coming out next year. It is directed by their daughter, filmmaker and artist Rachel Mason. Now, therefore, be it resolved that the City Council of the City of West Hollywood hereby recognizes Circus of Books for more than 30 years of business and a long-lasting legacy in the West Hollywood community.”

The proclamation was followed by a question and answer portion led by Rachel Mason, where members from the audience were allowed to ask questions and make comments about the documentary.

Rachel Mason wants to put the word out to anyone who may have Circus of Books archival footage–be it video or personal photos in their possession, and is willing to share these items to document them as part of gay history.

Send your photos and/or video footage to: circusofbooksmovie@gmail.com.

To learn more about the Circus of Books documentary visit documentary.org/project/circus-books

Dirty Looks: On Location began in 2012 in the bars and community centers that fill New York City. Pitting screenings or performances in everyday spaces brought new life to the works, focusing on the social nature of art making in the city. On Location 2018 was organized by 13 local curators, artists and promoters, playing with venues and meeting places that defined queer life in Los Angeles: 31 spaces across the 31 days of July, charting a progression of culture(s) using one month’s time.