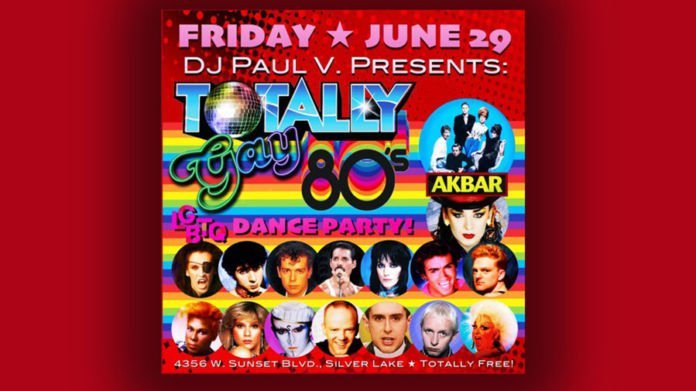 DJ Paul V is gaying it up for Pride Month with a Totally Gay 80s: LGBTQ Dance Party at Akbar, June 29.

“I started my club DJ career in 1981, and all these bold and fearless LGBTQ artists were essential choices for the dance floor,” Stated DJ Paul V., whose government name is Paul Vitagliano. “Not only were many of them in my age peer-group, I consider them all icons and heroes for choosing to declare their queerness at a time when it was still quite dangerous and, possibly career-killing, to do so. And even if some of them officially came out a bit later in life, I think people need a reminder of just how many LGBTQ artists contributed to the soundtrack of all our lives at the time. So for Gay Pride Month, this is my chance to really honor those contributions. And seriously, they gave us some of the greatest and most beloved music of the 80’s to begin with, so it’s kind of a no-brainer”

Along the way, his LA club career flourished as the co-creator and DJ/promoter at legendary hotspots like DRAGSTRIP 66, SPIT LA (at The Faultline), and BOOTIE LA (the all-mashup dance party at The Echoplex). He’s also booked to DJ concerts around town, such as Robyn, PIL, LCD Soundsystem, Ellie Goulding, Bloc Party, Miike Snow, The Gossip, OMD, Lorde, and Gary Numan among others, as well as DJing for event gatherings curated by Outfest, The Getty Museum, World Of Wonder, Project Angel Food, The Trevor Project and more. He was also the chief music reviewer for Frontiers Magazine, and is currently writing music reviews and features for The Fight Mag — thefightmag.com

Radio-wise he brought mashups to the masses on the LA airwaves from 2005-2009 via Indie 103.1 FM with his “Mashup Of The Day” feature. And his electro beats, indie rock, and mashups got heard every Friday afternoon inside “The Smash Mix” and every Saturday night with his “Neon Noise” mix show, which now streams Saturday nights from 9PM -12AM pacific on The Independent FM — http://bit.ly/IndieFMRadio

Paul is also the creator and curator of BornThisWayBlog.com (and accompanying published book) that shares global growing up LGBTQ stories and photos. He is currently a Donor Advisor for Center Theatre Group in Downtown Los Angeles, and is hard at work co-producing “Dragstrip 66: The Frockumentary” with Phil Scanlon.