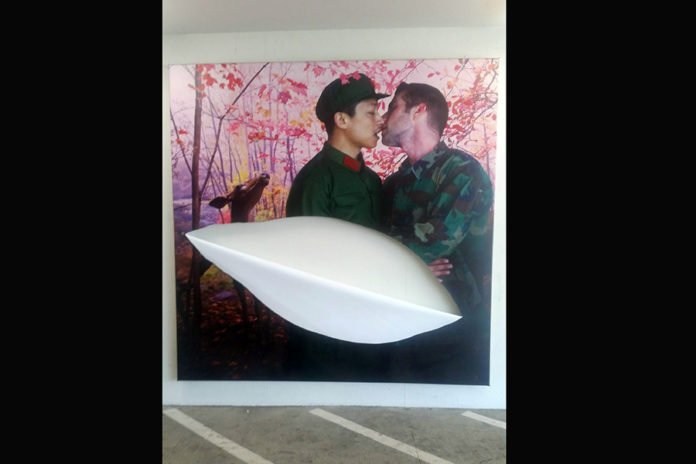 The art titled “Let a Thousand Flowers Bloom; 8990,” was created by artist Mei Xian Qiu. The image is one from a series of photographs by the artist, portraying a Chinese takeover of the United States. To learn more, click here

The artist called the vandalism “a shocking, unexpected and violent act.”

“On Sunday January 14, 2018, at approximately 1454 [sic] hours [Security Officer] Felipe Dias was monitoring activities from inside the parking office when he observed two individuals, a male and a female taking pictures of themselves next to the art painting that is displayed on the wall in the loading dock area. Given that all appeared to be normal S/O Diaz diverted his attention away from the area.

At approximately 1501 Hours S/O Diaz contacted the West Hollywood Sheriff Department and requested for someone to come out to the parking structure and take a report. Deputy Pascual arrived on the location at approximately 1626 hours and was informed of the incident.”

The male suspect is described as having dark skin, 5’9″ in height and in his late 20s. He has a bald head, full beard, and was wearing a long sleeve shirt, white pants and white shoes.

The female suspect is described as having light skin, 5’7″ in height, in her mid 20s, with long brown hair. She was wearing a white dress and white high heels.

A review of the security tapes from the past two weeks could not locate the two suspects with their faces to the camera.

Any information leading to the two suspects should be reported to LA Crime Stoppers by dialing 800-222-TIPS (8477), texting the letters TIPLA plus your tip to CRIMES (274637), or using the website http://lacrimestoppers.org