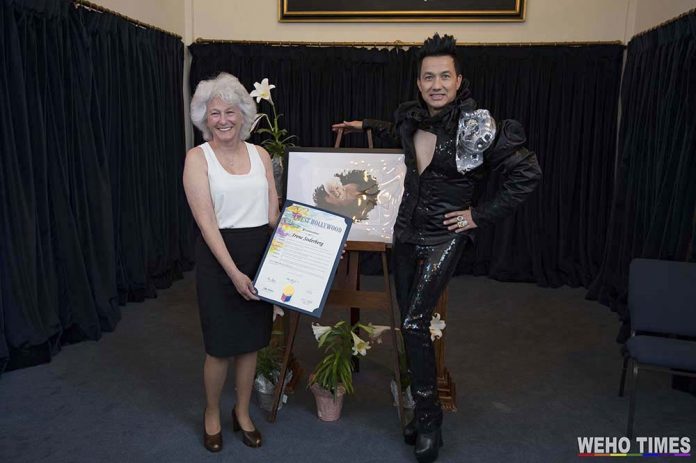 It was a bright sunny day at Hollywood Forever Cemetery on Thursday, April 21, 2022, with friends, family and fans of “Fairy Godmother of Fundraising,” Irene Soderberg, gathered at The Chapel at 6000 Santa Monica Boulevard, for a memorial service and burial of her ashes at the Rose Garden.

The HIV/AIDS activist and beloved entertainer received a proclamation by West Hollywood Mayor Lauren Meister. The City Council of the City of West Hollywood also declared April 21, 2022 Irene Soderberg Day in West Hollywood California, in celebration of her life and in recognition for her many contributions to the West Hollywood community. 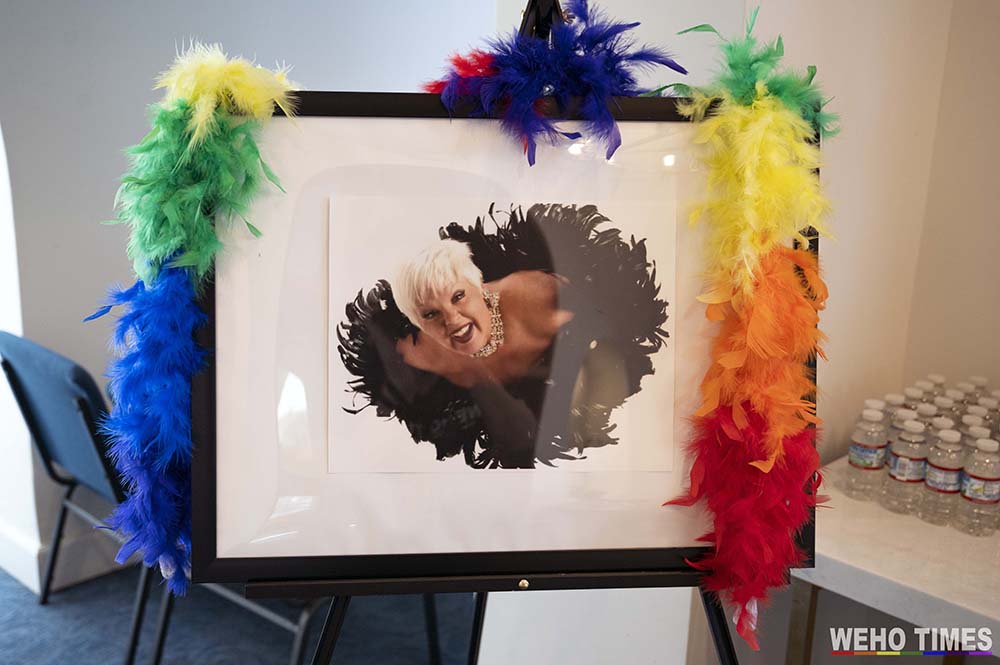 A boa adorned her portrait and friends took turns telling stories and giving her the memorial service she deserved two years after her death. There was singing, joking, laughter and a video montage capturing some her many performances throughout West Hollywood capped off the event.

Ella Kendall sang “Imagination” from the film Willy Wonka and the Chocolate Factory.

“Hello my name is Bruce Vilanch, your designated Irene Soderberg lookalike,” joked the actor and writer via ZOOM. He shared about her hard work ethic, their work together throughout the years and how they always hung out back stage at shows, but didn’t really hang out outside of work because they say each other a lot. “She left us too young and she left us in too much pain,” he said. “She had a lot of sorrow and discomfort in her life and it always made me sad to see what she was going through, so when she finally left us, I thought how she finally got rid of that pain. In a way, that was a blessing. And like the song says…’Goodnight Irene. Goodnight Irene. I’ll see you in my dreams…” 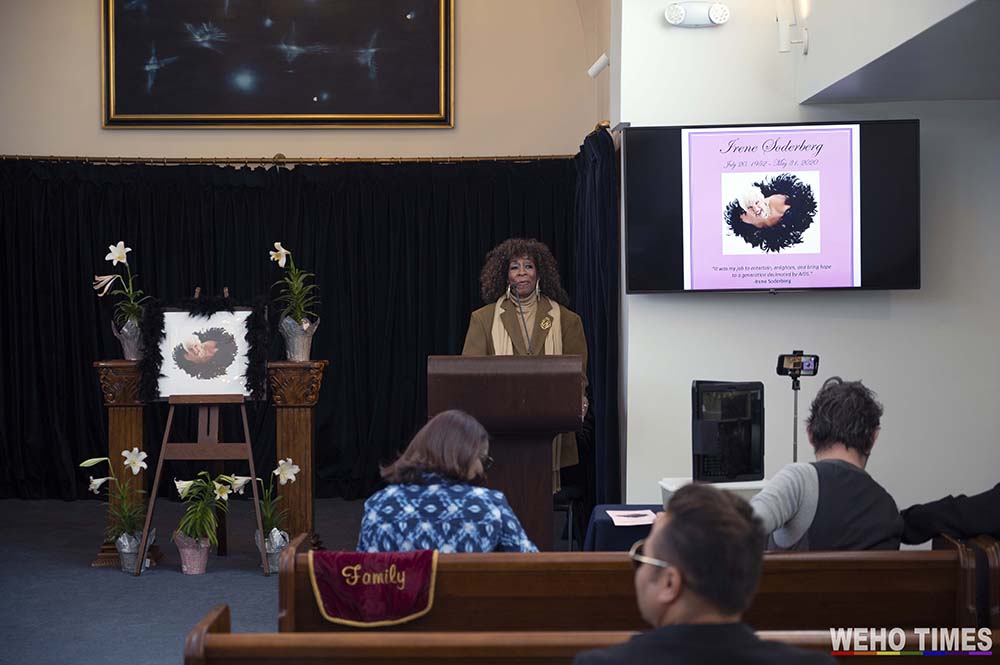 The memorial was hosted by Bobby Trendy and Mala Skelton who along with the help of Glenn Treibitz, JC Gafford, and And Darin Sanone worked tirelessly to raise money for the service. The main financial support came from the Actor’s Fund facilitated by Lara Green who attended the service.

Keith Bordan said the last song that Irene sang was at that very chapel for someone else’s funeral before the pandemic hit, called, “Sing, Sing, Sing Until I Die,” but he decided to sing something more upbeat, a gospel song about going home that he sang at his mother’s funeral. 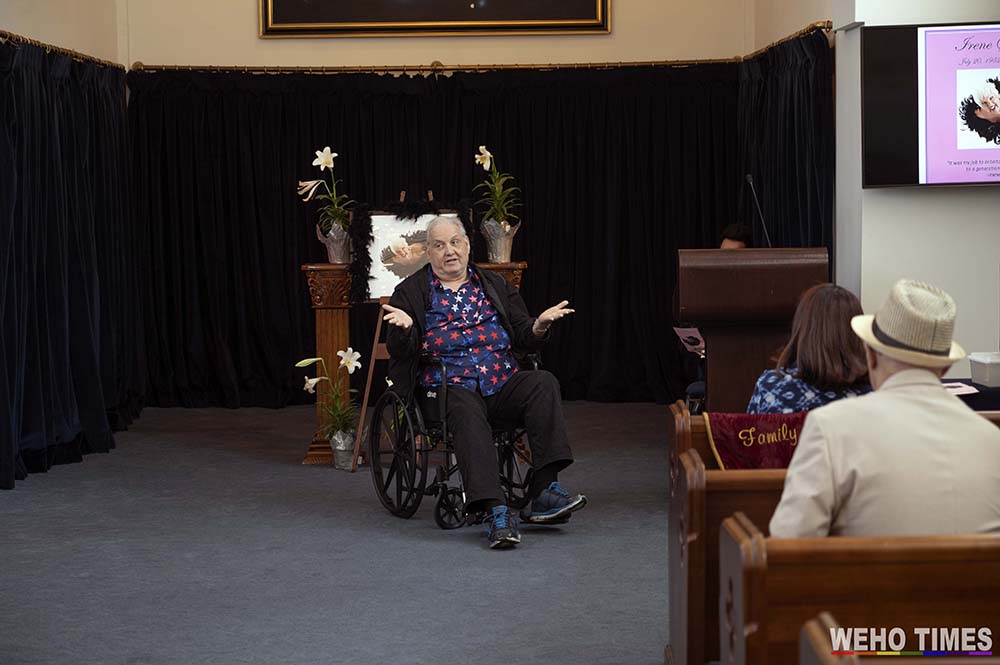 Worthie Paul Meacham, best known as drag personality Momma, brought the house down with “bitchy stories” and adventures that he had with Irene throughout their careers as entertainers and avid fundraisers: “Irene was asked to perform at the MCC Church when it was on Santa Monica Boulevard,” he said. “She got up and sang. And in the middle of her song, the fire alarm went off and the staff asked people to leave quietly. And she had the nerve to say, ‘WAIT! I’m not finished with my song!’ and THAT is who Irene Soderberg was and is. God bless you Irene. We’ll never forget you. And notice I didn’t use a mic because I was using my diaphragm.” 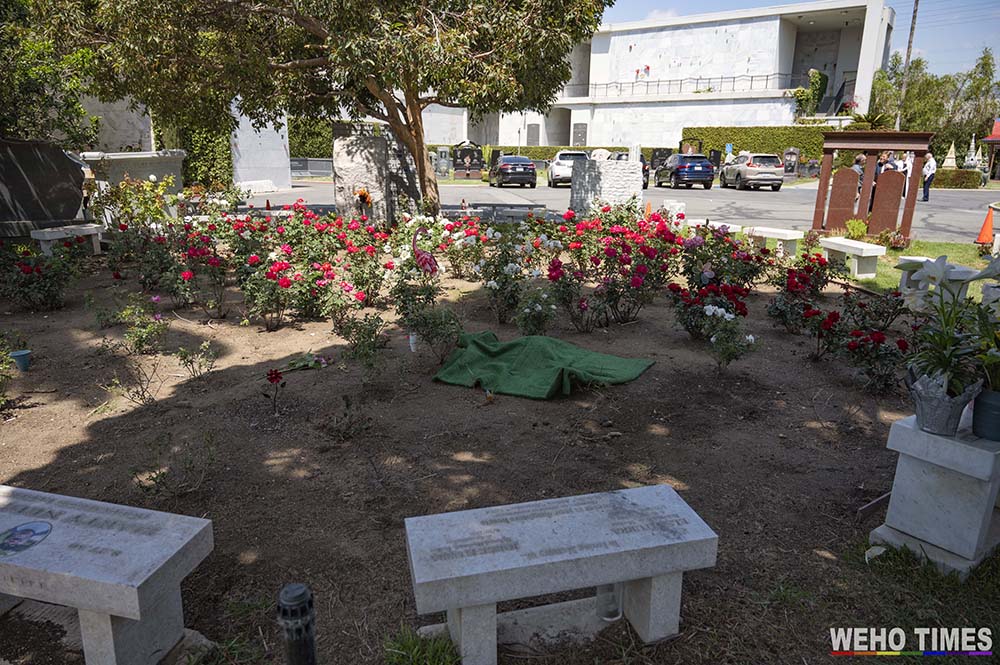 The Chapel service moved to a tent by the Rose Garden. There was prayer, a moment of silence and more singing. Those who wished to pour dirt in the hole on ground containing her ashes could be part of the burial. A plaque with her name will be on a wall at the Rose Garden which is located walking distance from Judy Garland’s resting place.

Entertainer Irene Soderberg passed away on May 31, 2020. She had been entertaining for over 30 years. Wherever there was a piano in West Hollywood, she was there singing. She performed regularly at the Christina Applegate-owned Villa VillaKula back in the 90s (where Fiesta Cantina now sits) and she also entertained at the long gone Don’t Tell Mama piano bar in West Hollywood to name only a few of the WeHo venues she performed in.

She has been described as an HIV positive woman who used her voice at so many HIV and AIDS fundraisers around West Hollywood. HIV Plus magazine named her #19 in the 25 Most Amazing People Living with HIV in 2019 and credited her for raising millions for those living with HIV with her wildly entertaining and inventive stage shows. San Francisco declared April 21 “Irene Soderberg Day” in 2002 for her tireless work and contributions to HIV and AIDS causes over the years. Her husband infected her with HIV in 1990 while she was living in San Francisco. She came out as HIV positive to battle HIV stigma. She was 67 years-old.