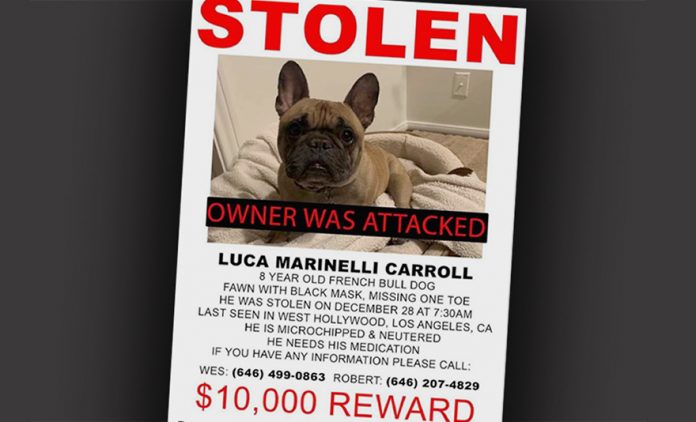 The City of West Hollywood made headlines this morning after reports that a sickly French Bulldog was viciously stolen near the WeHo boundary on Shoreham and Wetherly drives, just up the street from Sunset Boulevard. Video posted by ABC-TV Channel 7 shows Robert Marinelli, the dog’s owner, being dragged by the side of a car and flung to the curb where he rolls several times on the pavement. Luckily, he was able to stand and could be seen limping away in pain. The incident happened on December 28, at 7:30 a.m.

Marinelli told the Los Angeles Times that he sensed danger when a man approached him early Tuesday while he was walking his dog Luca, near West Hollywood.

Marinelli tried to grab Luca and make a run for it, but he says he was struck or pushed and Luca was snatched from his arms. The assailant jumped into the passenger side of a waiting black sedan. Marinelli believes his jacket got snagged when the thief slammed the door which is why he was dragged about 200 yards leaving him on the ground with half of his body covered in scratches. His phone was broken and his dog is gone. Authorities say he is lucky to be alive.

LA Times reports that dogs are often sold quickly in plain view in places such as Hollywood Boulevard, Melrose Avenue and the Venice Beach boardwalk, according to Tim Talman, an officer with the Los Angeles Police Department’s Hollywood Division.

Authorities monitored those areas throughout Tuesday to see whether Luca turned up, but he wasn’t recovered, said Talman, who called the project “Locate Luca.”

According to a $10,000 reward bill posted on social media, Luca Merinelli Carroll is an 8-year-old French Bulldog fawn with black mask. He is missing one toe. He is microchipped & neutered and needs his medication.

Mernelli says Luca needs a special diet and is sickly and doesn’t believe he will sell for too much money. He’s hoping the $10,000 will inspire someone to come forward and safely return what he says is like a son to him.

What happened to Robert Marinelli was criminally unacceptable and I hope they rot in beverly hells❗ Instead of getting in a whole lot of trouble for a fad that made these lap dogs no better than a shelter pet into an overpriced commodity in dangerous times, try getting something for FREE like I did. The kind loving puppy I found that now has all her shots with vet records and, will NOT allow strangers to pick up and make off with her or her little cat friends as a few of her much larger opponents have found out. For some… Read more » 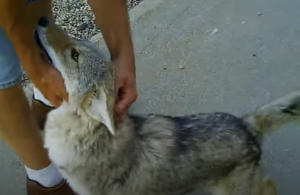 $10,000 reward for a DOG? Think how many rentboys and doobies that would buy! His priorities are way off, but then again, most designers have dogs not boyfriends.

Seriously, you might think it is ridiculous, but what an absolutely cruel, thoughtless statement. Maybe your priorities should change. How about showing some compassion? If he can afford $10K, he can afford it. Not relevant, either way. Not your money.