George Thompson Guenther (aka Shane Guenther), a former aerobics instructor at a popular West Hollywood gym in the mid-90s, has been implicated in the 27-year-old cold case disappearance and alleged murder of then 19-year-old Donald Lee Izzett Jr (also known as Donnie) who was last seen alive in McComb, Mississippi, in May 1995, roughly one month before Shane and his then friend, roommate, and (alleged) accomplice Kyle Everett Barnes moved to the city of West Hollywood in the summer of 1995.

Donnie Izzett’s mother Debra Skelley says she last spoke to her son on Mother’s Day in ’95. She says she received a distressing phone call from her son asking her to wire him some money. She then heard a scuffle and a scream, and the phone went dead. Debra never heard from Donnie again. Donnie was born on November 5, 1975. He would have turned 47 years old today.

Shane and Kyle moved to a one-bedroom duplex house at 963 Hancock Avenue, north of Santa Monica Boulevard in WeHo (the property has been remodeled into a two-story townhouse) in the summer of 95 during the same time that Donnie was officially reported as a missing person in Maryland where he and his mother lived. Shane converted the dining area into his sleeping quarters, while Kyle took the bedroom. Both men were well known in the gay community. They frequented the local gay bars, and hosted gatherings and movie nights at their WeHo home. Shane taught a step class at the Bally’s Sports Connection, located at 8612 Santa Monica Boulevard. He owned two Siberian Huskies that he frequently walked in the neighborhood.

Due to Debra’s relentless pursuit of the truth, Kyle came forward in 2019 with a tale of obsession, jealousy, and murder. He alleges that Shane shot Donnie in the back three times after Donnie threatened to leave him. Shane watched him bleed out. Kyle also confessed to participating in helping dispose of Donnie by burning his body in a fire pit outside a property owned by the Guenther family.

In an interview with police, Kyle stated a distraught Shane called him begging for his help. Shane flew Kyle from Santa Barbara to New Orleans. Shane then drove Kyle to McComb Mississippi where Kyle says a tearful Shane confessed to killing Donnie and showed him the naked body of the 19-year-old stuffed in the trunk of Shane’s British Racing Green Miata. Kyle confessed it was his idea to burn the body. He said Shane believed no one would be looking for young Donnie… except for maybe his mother…

The alleged murder of Donnie, Kyle’s confession, details of the investigation (or lack thereof), and a mother’s never-ending quest for justice are well documented in the award-winning podcast Someone Knows Something, Season 6. Host David Ridgen pieces together Donnie’s final days through interviews and on-the-street reporting.

True crime buffs can listen to the entire podcast in the link below:

Shane settled a wrongful death lawsuit filed by the Izzett’s estate against Shane Guenther alleging that Donnie died after a fight with Shane (case number 5:2019cv00041) for an undisclosed amount in 2020 (terms are confidential). Despite the settlement, Shane’s lawyer, Cynthia H. Speetjens of Madison, Mississippi, has denied the claim of Donnie’s murder in federal court. “The plaintiff has no proof that Donald Lee Izzett Jr. died as the result of any act committed by Shane Guenther,” Speetjens wrote. She declined further comment to the press.

Shane was born on May 5, 1967 in San Diego County. He has brown eyes, and he kept his hair blond, which he parted in the middle with bangs cascading over a visor. He is average in height at 5’7″ and had a defined physique and dressed like a typical California beach boy. He taught a popular step class at The Sports Connection which would later become 24-Hour Fitness Sport in 1998. 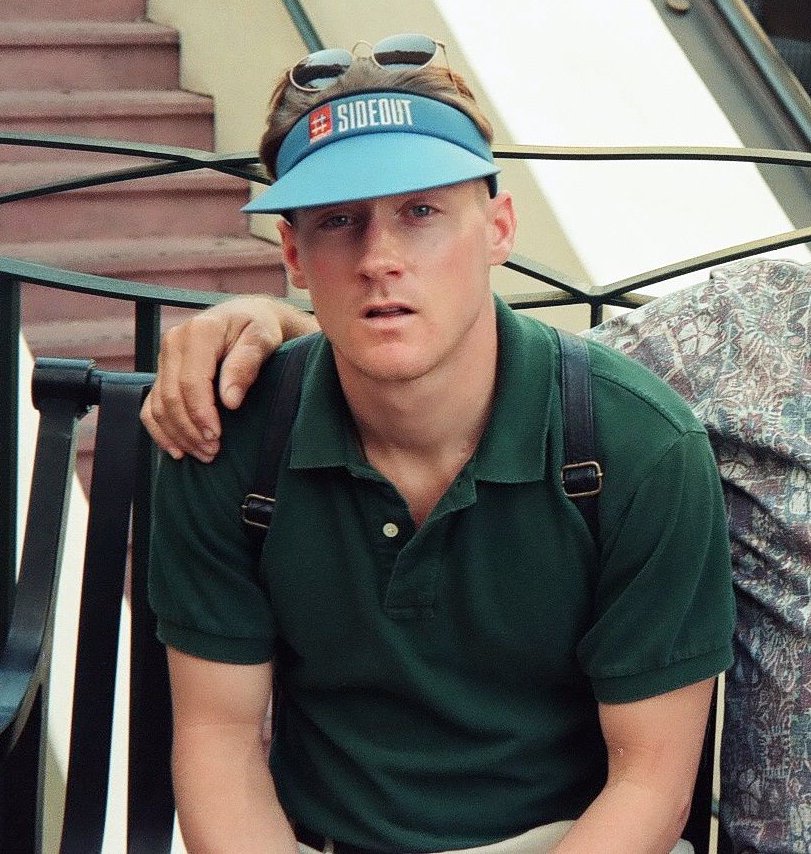 According to records, Shane had prior history living and working in the city of West Hollywood. A Smith & Wesson 38 caliber revolver was registered by Shane at the West Hollywood Sheriff’s Station on March 15, 1993, which lists him living at 816 Huntley Avenue. He was also employed at the Sports Connection as an aerobics instructor. He subsequently moved to the UCSB student community of Isla Vista, before moving back to WeHo in 1995. It appears there is no record of Shane Guenther having attended UCSB, but he pretended to be a student there. When interviewed earlier this year, Kyle, a UCSB graduate, still believed Shane had been an enrolled student at UCSB.

Kyle is blond and blue-eyed. He is shorter in height and slightly overweight with a receding hairline. After graduating from UCSB, he moved to West Hollywood at 963 Hancock Avenue with Shane Guenther.

Donnie was born to Debra Skelley and Donald Izzett Sr. in Kentucky, before relocating to Western Maryland with his mother. After graduating near the top of his class from Fort Hill High School, Izzett enlisted in the U.S. Army in July 1993. After moving to Florida for basic training, he wished to be discharged due to being far from family. Izzett reenlisted with the United States Air Force in February 1994, but he was discharged in March 1994 after admitting he was gay during the Don’t Ask, Don’t Tell military policy in effect at the time. Donnie returned home to Maryland and began studying journalism at Frostburg State University. The following year, Izzett departed Cumberland, Maryland for a cross-country roadtrip in May 1995 with his boyfriend Shane Gunther who was eight years his senior. 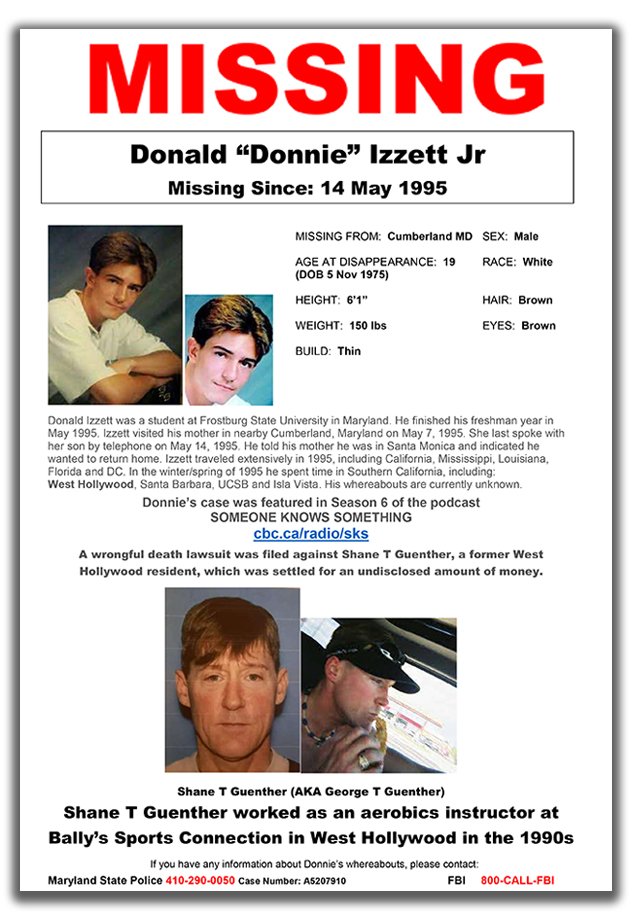 In May 1995, Skelley contacted the Maryland State Police after the distressed phone call from her son while he was in Santa Monica, California. State Police claimed Izzett left on his own free will and was not missing from Allegany County, Maryland. In October 1995, Skelley received mail of an overdue speeding ticket for Izzett driving a Mazda Miata registered to George “Shane” Guenther from Buckeye, Arizona on May 22, 1995. Research into the citation led Skelley to contact Guenther’s grandmother, Margaret Guenther, who witnessed Izzett and Guenther having an argument at the family’s farmhouse in McComb, Mississippi, about 100 miles north of New Orleans.

After sponsoring numerous unsuccessful forensic digs at the McComb property where the killing of Donnie is allegedly to have taken place, a team was successful in discovering human-like remains at the burn site in 2019. There was a recent dig in 2022 where more evidence was found. Lab analyses are in progress. 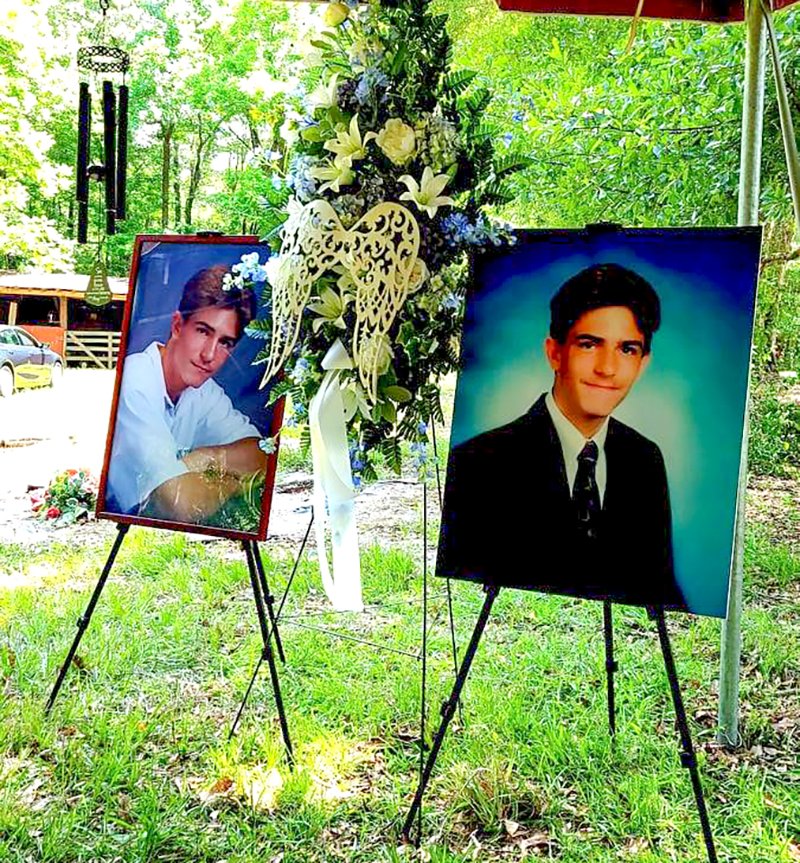 Debra and friends of Donnie Izzett are looking to long term West Hollywood residents and members of the LGBT community who may have clues or any useful information that may bring justice in the 27-year-old case of Donnald Lee Izzet Jr’s disappearance.

Shane Guenther and Donnie Izzett traveled throughout Florida and the Washington DC areas. They are known to have spent time in Santa Monica, Los Angeles, West Hollywood, Santa Barbara and UCSB in the winter/spring of 1995.

If anyone has any information on Shane Guenther or Donald Lee Izzett Jr, whether it appears useful or not, please contact:

Attempts to reach Shane Guenther were unsuccessful. This is the first in a series of stories investigating the disappearance of Donnie Izzett Jr.

I listened to the first three of the podcast episodes mentioned in this article so far and feel this case can be solved.The one witness featured in this podcast seems to be hesitant about what he knows about the disappearance of Mr. Izzett. You listen to the line of events from the 1990s and just sense the separateness of gay lives from that time.Hopefully with the openness of living a life as gay and being accepted as gay, one can live a life more fully without hiding secrets.Maybe some people lived a hidden and secret life in West Hollywood in… Read more »

Talk about a true-life mystery.Hopefully,a long-time resident of West Hollywood could remember a long ago detail about the relationship and if anything happened that was not part of the routine of the couple.It may be a good idea to pass this story along to anybody living in Palm Springs who are retired and might have some tips.