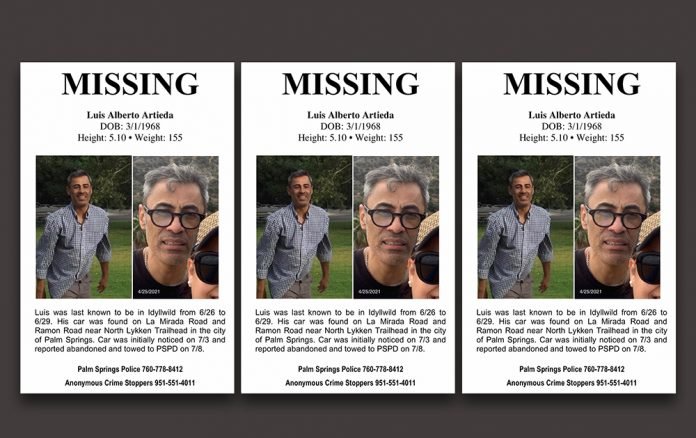 Luis Artieda is no stranger to the City of West Hollywood. He’s lived, worked and played in WeHo over the past few decades. Anyone who knows him in WeHo may have some information leading to his whereabouts. He was officially reported missing on June 30th.

A search for the 53-year-old man lead to his car that was abandoned in Palm Springs. It was found on La Mirada Road and Ramon Road, near North Lykken Trailhead. His car was located nearly 50 miles away from his last known location, which was in Idyllwild. The vehicle was initially noticed on July 3rd. It was reported abandoned and towed by PSPD on July 8th. He was last known to be in Idyllwild from June 26 to June 29, according to loved ones.

A source tells WEHO TIMES that there have been various searches for the missing man. The search includes arial sweeps of the North Lykken Trailhead area where another man in his 50s was found dead earlier this month off of La Mirada Road.

Palm Springs police are investigating the death, but do not suspect foul play. The body was found on Thursday, July 1, 2021. It appears as though the person died from exposure to the extreme heat, according to authorities. The man’s identity has not been released.

Another adult male was rescued by several law enforcement officials who assisted a hiker who was struggling with heat exhaustion in south Palm Springs on Thursday July 8th. The Desert Sun reports that the man was airlifted off the trail by a Riverside County sheriff’s rescue helicopter due to his inability to walk. He was hiking alone.

Luis Alberto Artieda who is also known as Louis Artieda is small in frame with a soft spoken voice. He is described as 5 feet, 10 inches tall, weighing approximately 155 pounds.

Loved ones ask anyone who sees Luis Artieda or has any information about his whereabouts to call Palm Springs Police at (760) 323-8116. If you wish to remain anonymous you can call Valley Crime Stoppers (760)341-STOP (7867).

Just so you know. The Palm Springs police department doesn’t care. Don’t hike, don’t go into the desert. No one will look for you. Your mom will call them every day for almost a year with no response. Every day she called. Every day.

Correct, law enforcement in the Coachella valley gaslight based on unfortunate stereotypes.