The former home to the WeHo Gold Coast Bar at 8228 Santa Monica Boulevard now has brand new plywood boarding up its front and back entrances. The bar has been cleaned, disinfected, and sealed off after the space was occupied by individuals experiencing homelessness last week.

Witnesses reported the back door was ajar throughout the weekend. A cleaning crew was on the scene this afternoon emptying out garbage and disinfecting the place. A witness told told WEHO TIMES that the back door was forced open and it was jammed, leaving it stuck halfway open. The back doors were boarded up on Monday, and plywood went up on the front entrance on Tuesday afternoon.

One of the Landlords, John Cole, husband to Monte Overstreet, was seen at the parking lot waiting for the cleaning crew to finish clearing out the space.

WEHO TIMES stopped by the bar last Friday, May 7th and found two individuals inside. One of the individuals was holding a spray bottle and appeared to be cleaning the place. However, she became aggressive when she was asked if she worked for the landlord and started spewing 911 conspiracy theories.

The images of homeless people occupying the former Gold Coast Bar outraged a lot of its former patrons who are still mourning the loss of their favorite gay watering hole. 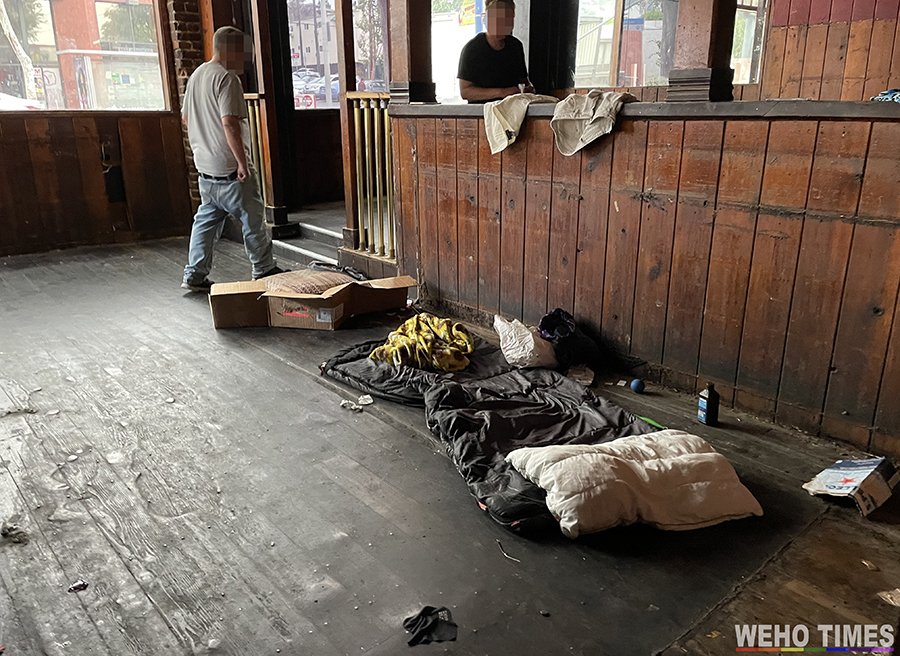 Many blamed the bars closure to landlord Monte Overstreet, who, according to the bar’s owner Bryan Worl, was not flexible in extending their lease and that he was determined to get the Gold Coast Bar out to sell the property to someone else.

Overstreet owns four gay business that went under during the pandemic. They include the Gold Coast Bar, Oilcan Harry’s, Flaming Saddles and The Rage Nightclub. The owners of all four bars credit Overstreet for their demise.

Overstreet is also credited for bringing the Gym Bar back to life at one of his properties at 8919 Santa Monica Boulevard after closed in July of last year. He also recently made a deal with singer Lance Bass and his business partners at Rocco’s WeHo to revive the empty Rage Nightclub space.

“It’s embarrassing and shameful,” posted Kevin Jeheber on a Facebook Group dedicated to the Gold Coast Bar. “The fact that people could so easily break in and STAY says a lot about the property owner and their respect for the community.”

“That and we could have reopened now and gone back to being the GC,” Bryan Worl responded. “But $$$ assholes ruin it…as it sits there depressed and filled with homeless people!!! This is so fucked up!!!”

“It’s a giant failure of the city, county and general public policy,” Kevin Jeheber said. “For all the talk about social justice and improvement in Los Angeles and Weho politics, the area seems to be turning into Gotham as depicted in the most recent Joker movie with Joaquin Phoenix. It’s never fully explained in the news why things have to get so much worse before they get better. The city and county weren’t like this a couple years ago.”

The occupation of the WeHo Gold Coast Bar revived an old rumor that the Faultline Bar is moving into the GC location. It’s a rumor started by owner of the shuttered Faultline, Ruby DeFresno (aka Ruby Nuno, Ruby DeFaultline). She posted a short video clip where she is using a crowbar to chip and tear out the Gold Coast Bar name located at the former bar’s parking lot. She vaguely suggested she was trying to pry the Gold Coast loose to make it the new Faultline. However, the recent boarding up of the bar suggests the landlords are still looking for a tenant at GC. Ruby has not mentioned the potential move since the backlash from her tone deaf post. The Faultline supposedly continues to look for a new location after it closed permanently at its home location late last year.

No arrests seem to have been made following the trespassing at the building. In fact, one of the homeless individuals photographed inside the bar last week was seen sleeping on the doorsteps at the back of the bar Tuesday afternoon as the bar was being cleaned. This was at the same time that landlord John Cole was seen waiting inside a truck for the cleaning crew to finish disinfecting the space. The new plywood may stop transient individuals from entering the building, however it will not stop them from loitering at the bar’s doorsteps.

Reminds me of the game P.A.M.E.L.A. that I have been playing that takes place in a science fiction, utopian city called Eden, with malls, courtyards, and residential condos. You emerge from cryosleep after a deadly pandemic☣ they thought was under control only to find that many survivors transform into homicidal zombies☠ and, you are camped out hiding for your survival. 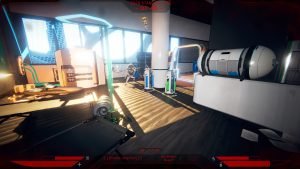