Flashback to the Groundbreaking of the Anita May Rosenstein Campus – 2017 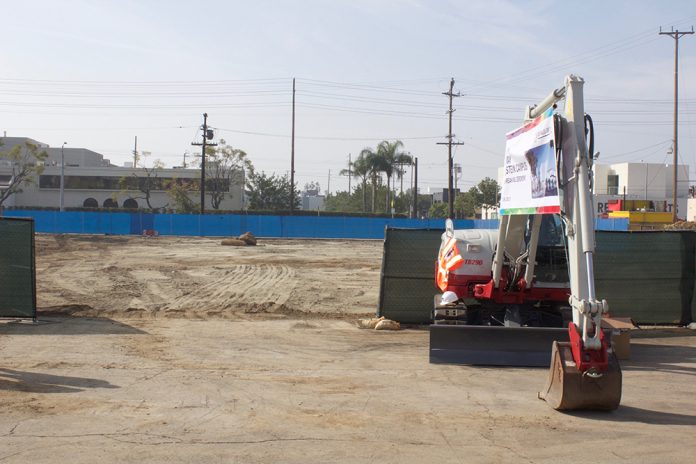 Here’s a flashback Friday to March 18, 2017, when the Los Angeles LGBT Center hosted a groundbreaking ceremony to start construction of The Center’s Anita May Rosenstein Campus on a sunny Saturday morning.

Lead donor Anita May Rosenstein was also in attendance. She was joined by family and friends at the event. 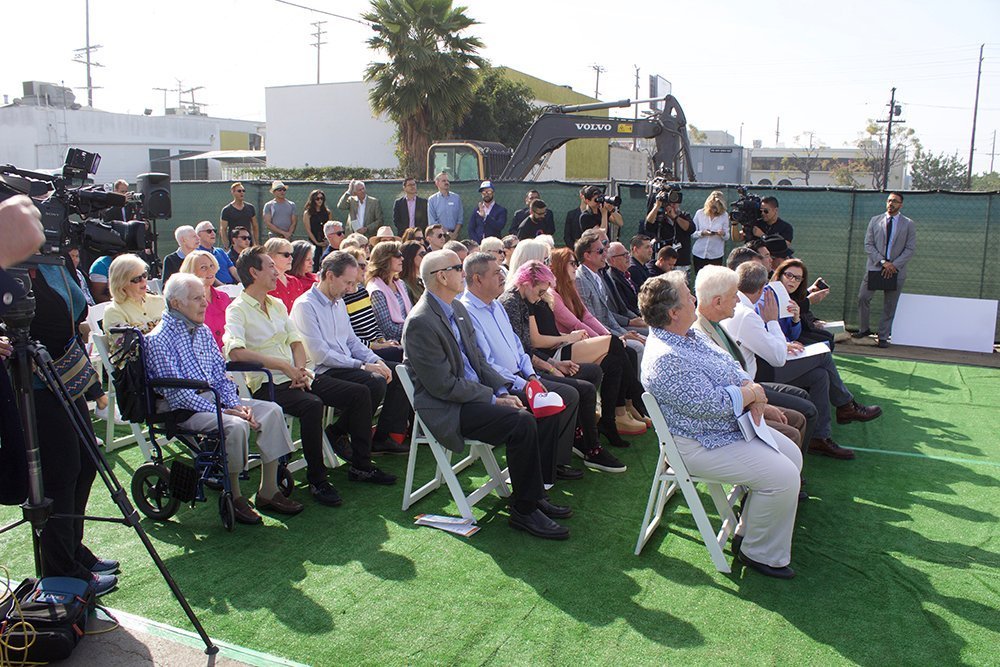 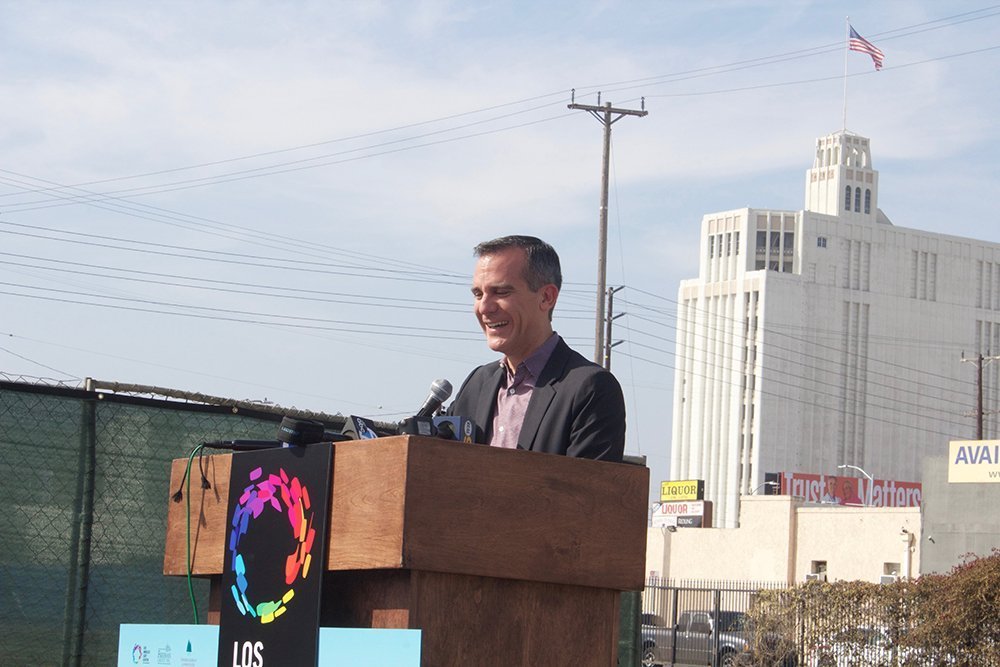 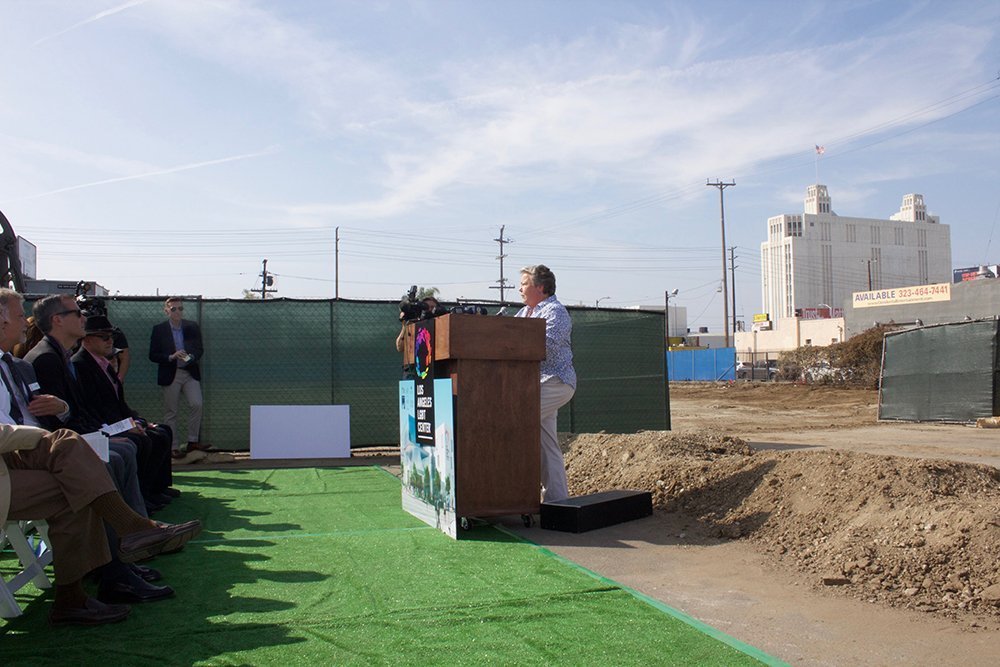 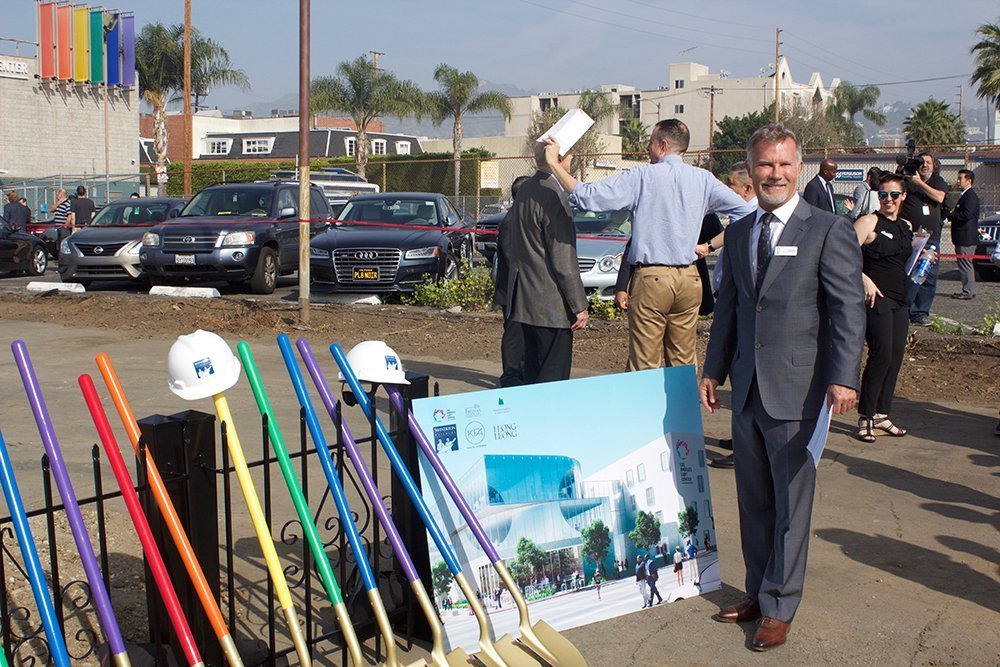 It was an emotional moment when Rosenstein presented The Center’s CEO Lorri L. Jean, with a check for $125,000 for a naming opportunity and a second check for $125,000 for a naming opportunity for The Center’s chief of staff Darrel Cummings. Rosenstein wanted to ensure that their names and legacy are well known on this project.

The ceremony was also attended by Los Angeles Mayor Eric Garcetti and Councilmember David Ryu, who were both speakers at the event. The City of Los Angeles presented the LA LGBT Center with a check donation of $50,000.

Rainbow-colored shovels were used for the actual groundbreaking. The Center’s then meticulous marketing officer, Jim Key stepped in to re-align the shovels so they were in the order of the rainbow colors before the ceremony began. 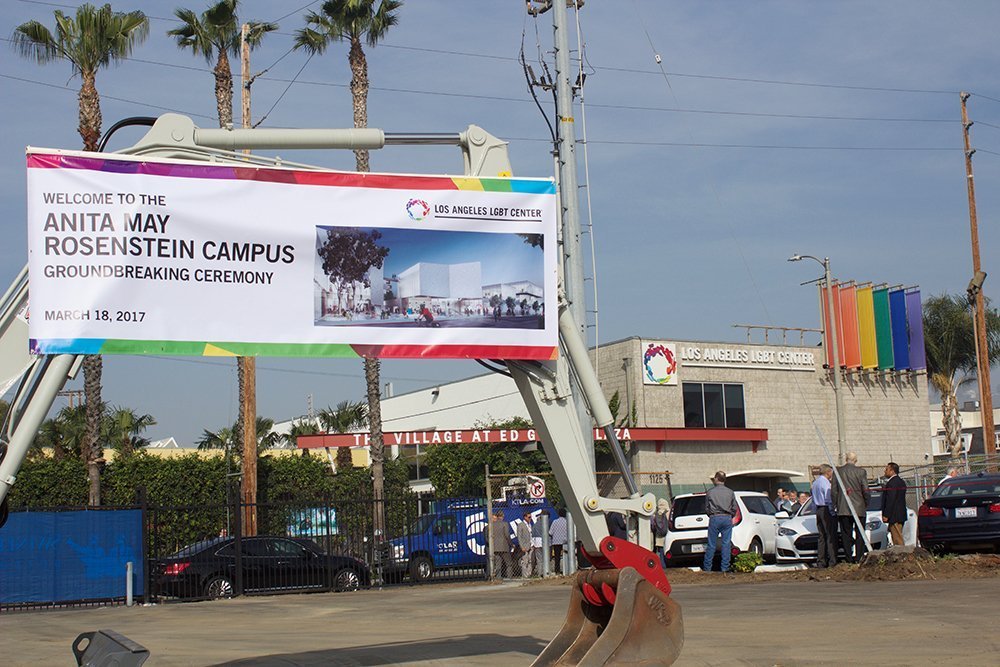 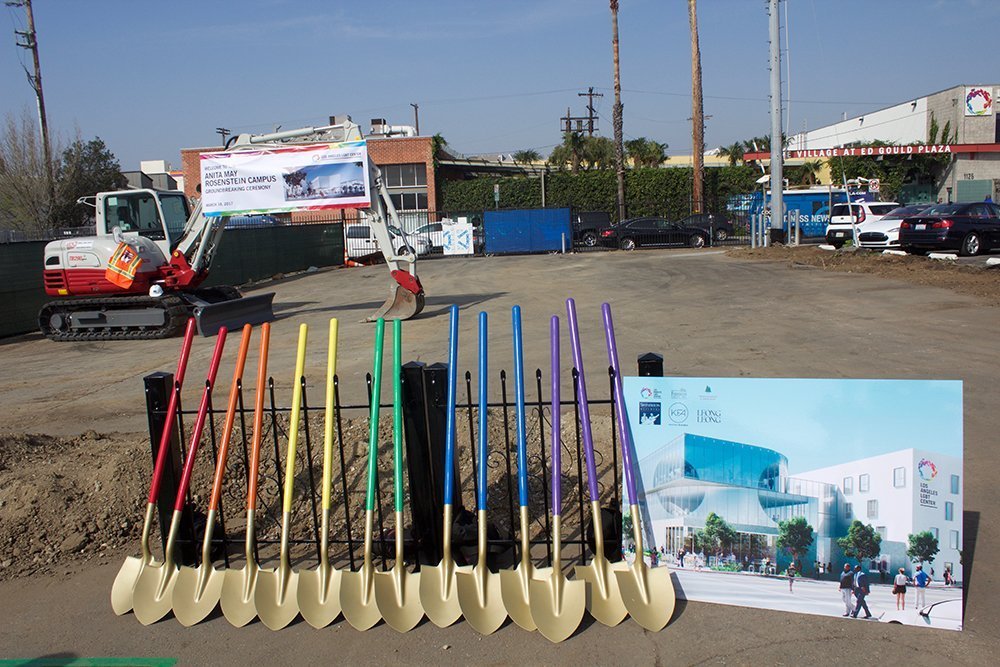 “This is the realization of such a long-term dream for The Center to finally break ground on this facility,” Key said at the ceremony. “We’ve been thinking about and wanting to do this for so many years, so to see it actually happening is emotional, it’s exciting and I’m choking up just thinking about it.”

The actual groundbreaking was a photo op with LA LGBT employees, city officials, and donors, grabbing a shovel and digging into the dirt that will one day become the massive center standing today. 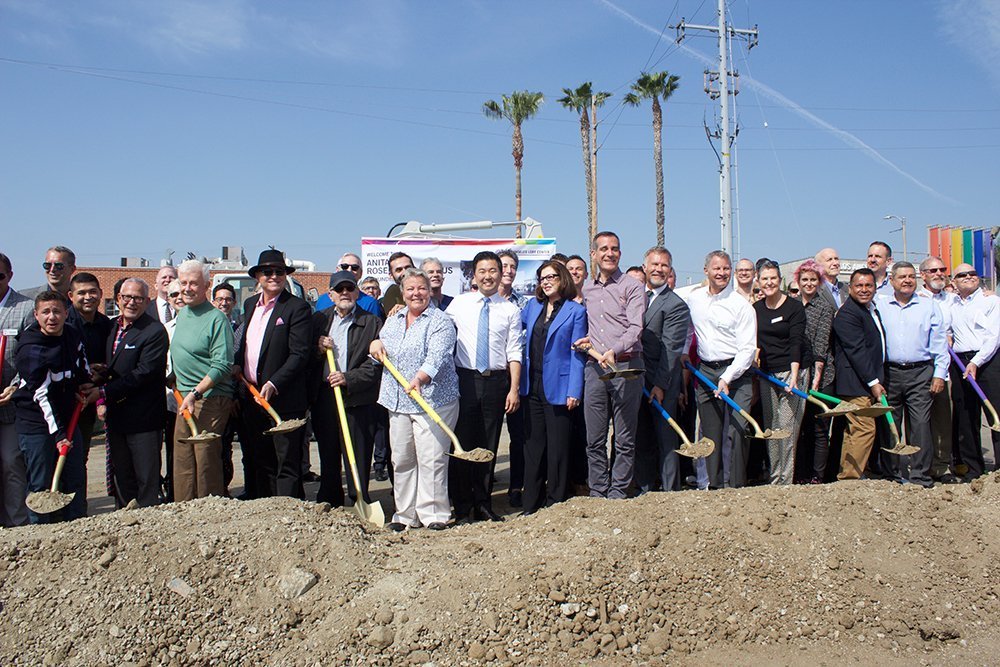 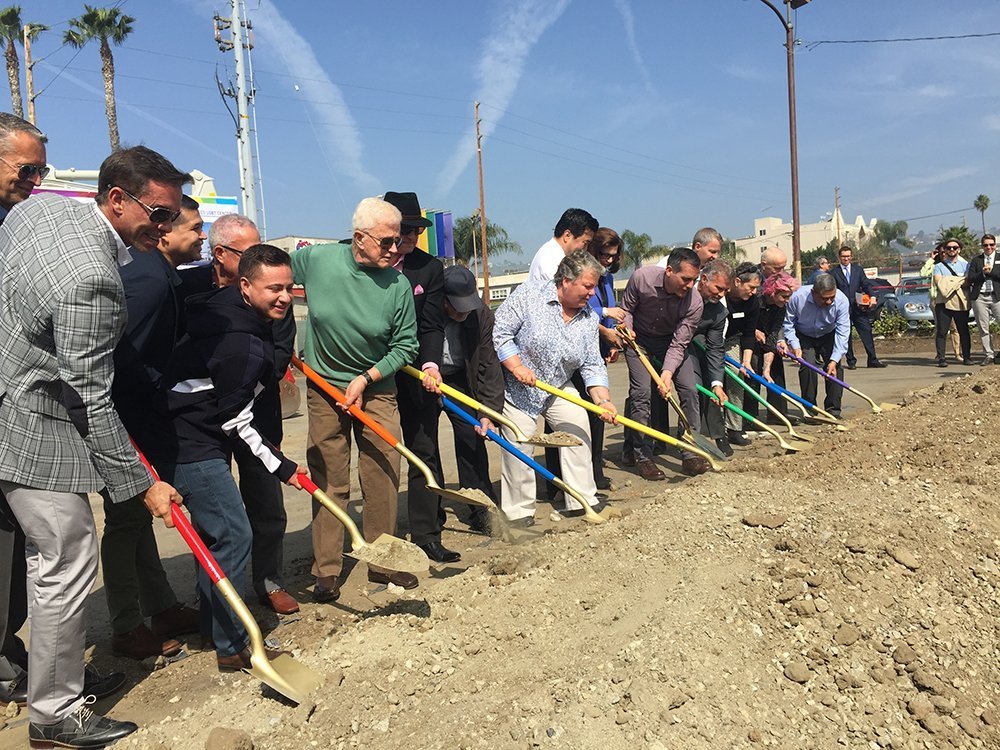 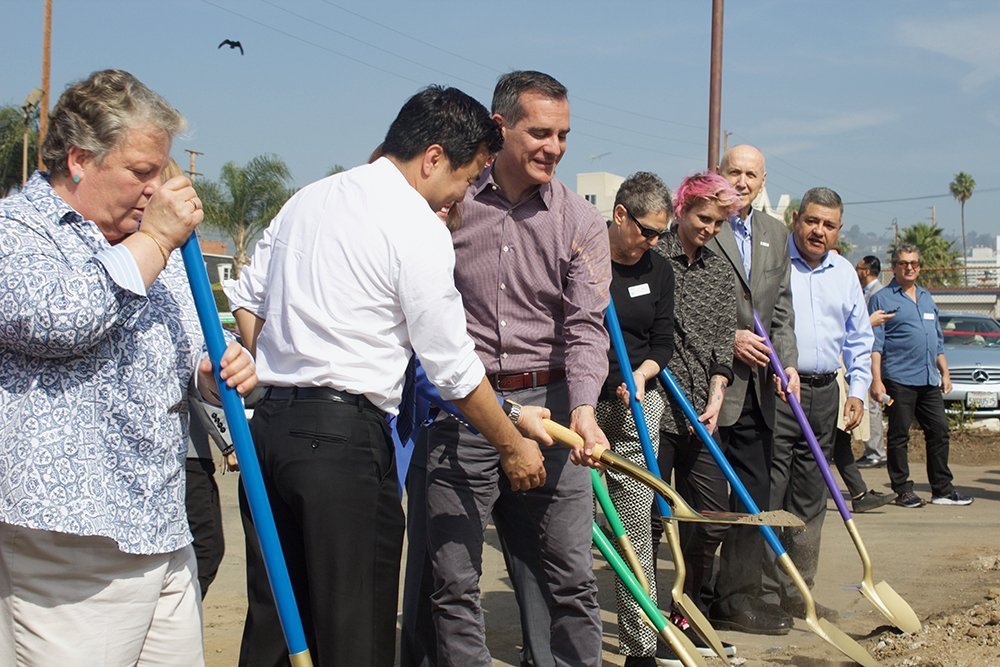 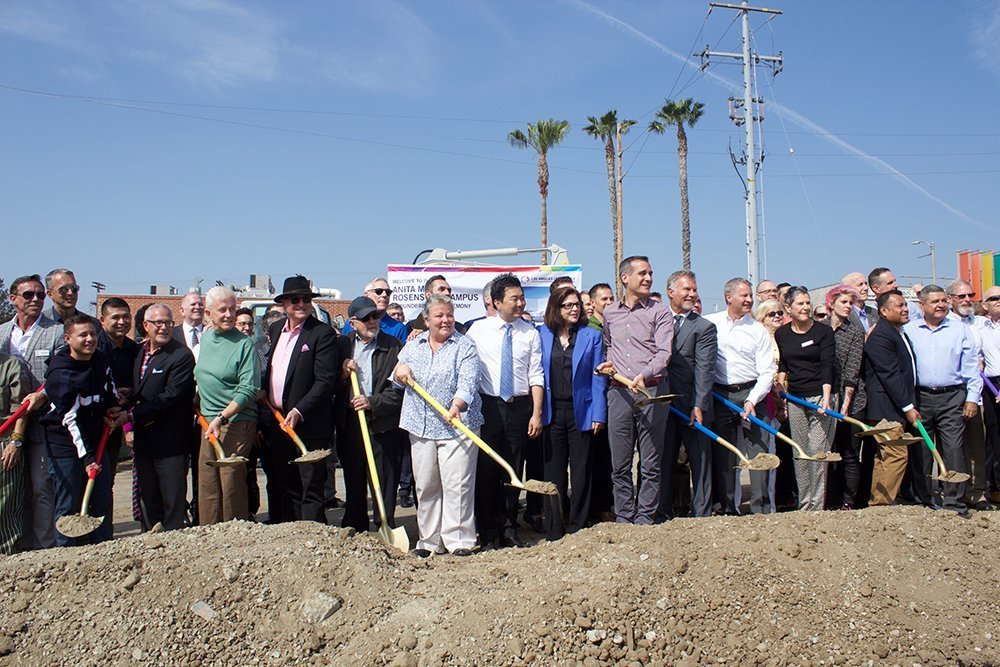 The campus located at 1116 N. McCadden Place, directly across the street from the Center’s The Village at Ed Gould Plaza is now celebrating its grand opening, on Sunday, April 7 from 11am-5pm. The public is invited for the ribbon cutting ceremony at noon and and all-day block party, which will include entertainment and guided tours of the two-acre complex. The grand opening is part of the the LA LGBT Center’s 50th Anniversary celebration. 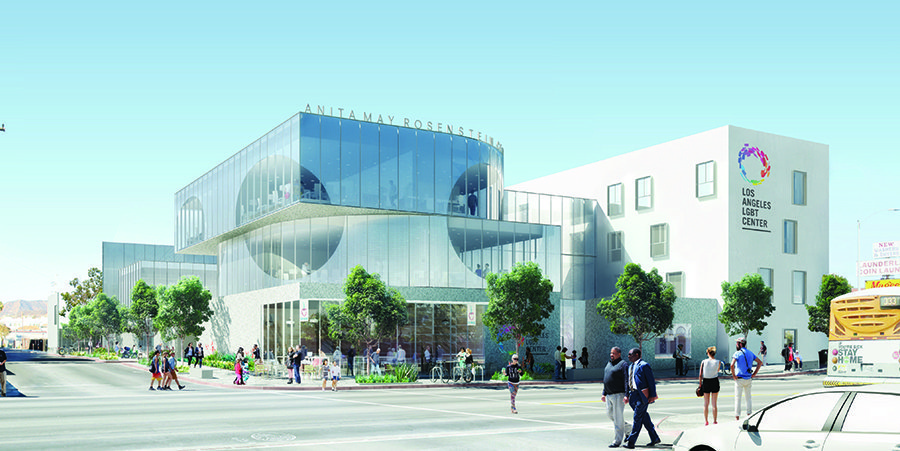 The Anita May Rosenstein Campus is the first-of-its-kind complex in Hollywood, offering 135 units of affordable housing for seniors and youth, 100 beds for homeless youth, new youth and senior centers. It will serve as the Center’s flagship building. The entire headquarters located at the four-story McDonald/Wright Building will be transformed into a health and medical center.

The campus was designed by Leong Leong who was recently honored by the Architectural League of New York as one of this year’s “emerging voices” architectural firms and brought to fruition by executive architects Killefer Flammang (2016 California Council AIA Firm Award winner).

Phase II of the Campus is scheduled to open in mid-2020. It will include 99 units of affordable housing for seniors and 25 supportive housing apartments for youth.

For more information on the LA LGBT Center, visit lalgbtcenter.org.