According to One Archives at the USC Libraries, The Blue Parrot gay bar, located at 8851 Santa Monica Boulevard in West Hollywood, opened in 1978 and closed in 1982. Described as a “swanky fern bar”, it was located where Revolver Video Bar is today on the corner of Santa Monica Boulevard and Larrabee Street.

Revolver Video Bar is famously known for its revolving doors, and The Blue Parrot was known for its tropical theme and giant panoramic windows that put every patron on display during a time when queer bars on the Santa Monica strip had tinted, foggy, or covered windows so that passing cars couldn’t look inside.

Former patrons remember the overall setup for The Blue Parrot which was pretty much the same as what we see at Revolver today. You had the bar to the west wall, there was a second bar to the back, and the restrooms downstairs were notoriously known for sexual encounters.

Some differences were the pool table towards the main entrance to the right. At some point, there were round tables with artificial palm trees in the main floor, and there was a pinball machine possibly by the bar to the left or at the back bar, based on the video footage from Two on the Town.

A grainy photo of the interior by Frank Ellis has been circulating in gay history Facebook groups like Gay Vintage Los Angeles for Men. However, based on eyewitness accounts, it appears the scan of the negative or the photo was accidentally flipped horizontally. 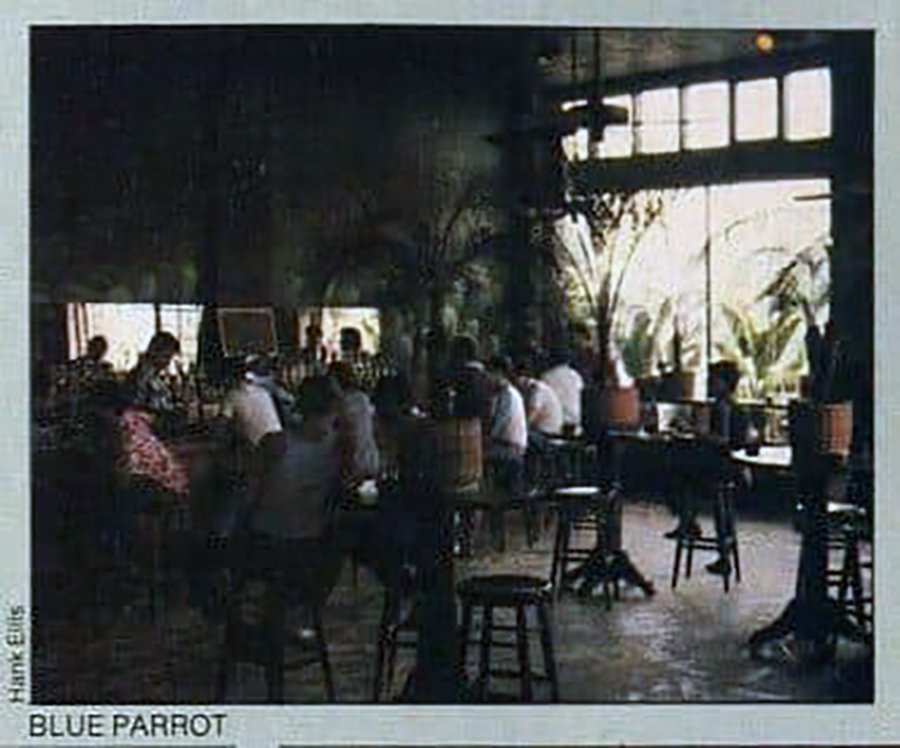 When the image is reversed, the photo depicts what the interior actually looked like during daylight with the bar accurately located on the west wall and the giant window facing Santa Monica Boulevard:

The Blue Parrot closed, and Revolver Video Bar took over the space in 1982. The ferns and palm trees were removed, and the open windows were covered up with beveled glass brickwork, which obstructed the view inside.

Revolver would shutter in 2004.

In 2005 East/West Lounge took over the space, offering an upscale experience. They removed the windows completely and added an open patio to make the inside visible from the street once again.

East/West Lounge would shut down in 2011 to make space for the resurrection of Revolver Video Bar, which still stands today. There are rumors circulating that Revolver is on the verge of closing again and that the shuttered Flaming Saddles, which was located across the street at the old Larabee Studio, will open in its place, but that deal appears to off or it is on a major delay.

Gay men seem to remember The Blue Parrot very fondly despite its rather short-lived three-year lifespan.

“My old work uniform (T-shirt’s the size of a postage stamp… how the hell….),” wrote Wil Kinsley, on Gay Vintage Los Angeles for Men. “Blue Parrot was first bar on Santa Monica Blvd., with plate glass windows all around. No more back-alley entrances. No more fear of bullets flying through. On S. Monica & Larrabee.”

“A shot of the Blue Parrot, now Revolver, from the 1979 Season 3 Episode 16 of Wonder Woman when Diana Prince goes undercover as a recording artist,” reads a post by Andrew Scott. “A lot of the show was shot at the Larrabee West Recording Studio across the street…”

According to queer maps, “Many queer bars, which could not really exist officially, or they’d get shut down, used code names. Often the first word of the bar’s name was a color, and the second word was a bird. This was known as the ‘bird circuit’ – you could visit any urban area in the country and usually find a ‘Blue Parrot’ or a ‘Purple Parrot’ or a ‘Black Swan’ or such like.”

Back then West Hollywood wasn’t an independent city. However, the area was referred to as West Hollywood. the 1.9 square miles wasn’t referred by any other name when I moved out here in ’78.

This area has been called West Hollywood since 1925. Just saying.

I have many fond memories of the Blue Parrot. 1978 was the year moved to L.A. The Blue Parrot and Rascals (Mother Lode) was where I was every weekend. Also, the movie “Partners” from 1982 with Ryan O’Neal and John Hurt had shot a couple of scenes in the Parrot. John Hurt is in those scenes. Anyway, Revolver had one big improvement over the Parrot in that it had central air-conditioning.

Wow the street looked different then! The trees make such a difference today. Across the street at that time was Larrabee Sound Studios (formerly Flaming Saddles and the Bank of Sherman). Madonna, Cher, M. Jackson and many others recorded there. https://en.wikipedia.org/wiki/Larrabee_Sound_Studios

I actually went to all the establishments in the report. Dukes was the best cafe… everybody went there~ was so homey. The Tropicana Motel was wild~ Ramada is there now. The Blue Parrot was a beautiful looking bar, but unfortunately for me and other POC was very racist. Not friendly to non-clone types.. Sorry to put a damper~ but that’s how it was for someone who was there.

Not to diminish your experience, but all the bars were racist and friendly back then and into the 90s. The same can be said about the entire city of West Hollywood.

My group of friends included several people of color, and we never had a problem.

This is amazing. I never knew this place existed. I never thought about it to be honest. The video is everything. Makes me sad I didn’t get to experience this part of Weho history.