Home Food & Drink BREAKING! Flaming Saddles Saloon is Closing After Operating in WeHo for Over... 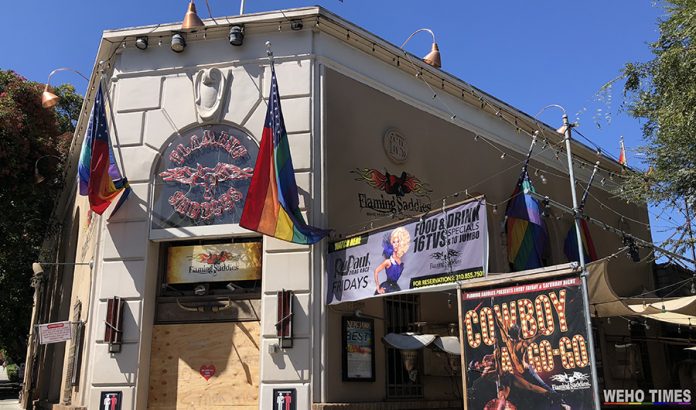 Flaming Saddles Saloon, located at 8811 Santa Monica Blvd, on the corner of Santa Monica Boulevard and Larrabee Street, is closing permanently after operating in WeHo for over five years.

An official statement on the country western bar’s official Facebook page sites that the owners were not able to negotiate their lease during a time of COVID. Like Gym Sportbar located a block away, which announced its closure early in July, Flaming Saddles was not able to work it out with with the landlord and has been forced to close. Employees were informed that they would not be returning to work this afternoon.

According to the statement posted by owners Jacqui Squatriglia and Chris Barnes, COVID wrecked havoc on Flaming Saddles and it will not be re-opening at its current location. It is not clear if the plan to open the bar at a different location in WeHo.

The official statement reads as follows:

“Hello All,
I hope that this email finds everyone in good health and good spirits.
I am writing today to give an update on Flaming Saddles WeHo…
It has been a very long 5 months, very long indeed.

Through out these months Chris and I have chosen to stay positive. I had spoken to landlords, thought I worked out deals, and we were watching the science carefully as well as city and state regulations. We wanted to make sure it was as safe as possible before we attempted to re open our doors.

Well, As we were drawing close to opening Flaming Saddles WeHo, it was revealed to us that we did not have a secure deal. That was certainly a surprise, but we went immediately into re negotiating. If you know Chris and I you know that we do not give up, we fight to the end and always stay positive. That being said, Please know that we have absolutely exhausted every way possible to make a deal for our location…

With the heaviest of hearts, We are sad to say that Flaming Saddles WeHo will not be reopening at 8811 Santa Monica Blvd.

I would like to thank you all for your hard work and dedication. We had become a force to be reckoned with in WeHo and I could not be prouder of the brand and all of you.

Covid-19 has reeked havoc globally, and with a better national strategy here in the U.S. perhaps things would have been different. With the rules as they stand today there is no way we could of fulfilled our fiscal obligations that were presented to us at this location.

We however stand proud. We did our best and rose up… spun on poles, swung on ropes , poured great drinks and danced our way to the top. No one did it better… We are proud of all of you, the best managers, bartenders, servers, barracks, security, Dj’S, dancers and drag queens … We thank you.

Flaming Saddles will march on!!!

“So the news is true unfortunately,” posted Flaming Saddles head bartender Andy Santiago. “Flaming Saddles West Hollywood is closing our doors for good… it’s a really sad day for me.. this was the place I called home with the MOST amazing people I have ever met but with what’s going on this worldwide pandemic and an unhelpful landlord… the decision has been made to close up shop! I will miss everyone I worked with and every single customer that walked through those doors that we were so happy to help! I will miss all my regulars that I got to spend such cherished times with(if you’re not tagged I’m sorry but you know who you are).. hopefully in the future under different circumstances we look forward to seeing you again But it’s goodbye for now and I will miss you until we can see each other again!! 💔💔”

“I will miss you Flaming Saddles Weho,” posted Jim Hall. “RIP. So sad to see the doors close forever 😢 thank you to the owners Jacqui Squatriglia and Chris Barnes for trying their best to keep it going amid these times of Covid-19.”

“So sad to see the doors of Saddles close, posted Flaming Saddles regular Kornbread Jeté. “Eric Restivo was the first person to offer me a full residency when I started drag! Flaming Saddles West Hollywood offered SO MANY opportunities and I truly am grateful! My fat ass gone miss collapsing on this floor after my 2 minute walk around numbers!”

Flaming saddles had its official opening on January 28, 2015, with an event benefiting the Los Angeles LGBT Center. The night honored country music star Billy Gilman, one of the few major country stars who has come out as gay back then. It was hosted by then West Hollywood Mayor John D’Amico.