Five Guys Burgers WeHo has left the City of West Hollywood after six years. The windows at the burger joint located at 8731 Santa Monica Boulevard are covered up, and employees have been seen clearing out the building this past week. It’s closure will be a loss for those in WeHo who were fans of a local fast-food chain offering made-to-order burgers, fries and hot dogs, plus free peanuts while you wait.

“It was time. We knew it was coming,” an employee told WEHO TIMES. “Part of it was the pandemic. Part of it has to do with our lease running out, but the biggest part is that this location is very heavy on deliveries and there really isn’t anywhere to park in front to make these deliveries. That was a challenge. But we may come back to WeHo at a better location at some point. That is very possible.”

Five Guys Burgers in West Hollywood has been down to very limited hours, operating from 11 a.m., to 4 p.m. Sunday to Friday for in-store hours (closed on Saturdays) and from 11 a.m. to 3:30 p.m. for deliveries. According to a source the labor shortage determined the hours of operation after the city began to open again for businesses post COVID lockdown.

The burger joint opened in West Hollywood in June of 2015.

Family owned and operated, Five Guys is one of a leading fast casual burger restaurants, offering a classic take on burgers, hot dogs, fries, milkshakes and more. The first burger joint opened in Arlington Virginia in 1986. From 1986 to 2001, Five Guys opened five locations around the DC metro-area and perfected their business of making burgers, which they claim started to build a cult-like following.

In 2002, Five Guys decided to expand their burgers and started to franchise in Virginia and Maryland.

In 2003 Five Guys sells out of franchise territory within 18 months and starts to open the rest of the country for franchise rights.

From 2003 to the present, Five Guys expanded to over 1,000 locations in over 47 states and 6 Canadian provinces.

Five Guys makes it the fifth place to close at that shopping center on the corner of Hancock Avenue and Santa Monica Boulevard with Bean Coffee Roasters closing this past June, and Gym Sportsbar closing last year during the COVID shutdown.

We still have the impossible burger with diaya vegan cheese that is available here in the Great City of West Hollywood, that holds its own with the best burgers and, it’s vegan. Beaches WeHo makes one of the largest and best vegan impossible burger available, considering their excellent high quality buns that really add to the burger’s overall taste. The taste of the impossible burger is nearly indistinguishable from real beef do to its leghemoglobin (legume hemoglobin) content, carrying heme that gives meat its flavor. 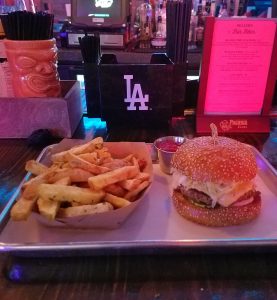 It was a horrible location from the get-go with a horrible building owner. I’m surprised they lasted as long as they did. The City of West Hollywood should NOT have allowed that place to be built with dismal parking.

I agree. There is a cheaper faster local burger joint 1 BLOCK AWAY that has been there for years. Why do banks okay these loans? Can’t they use google maps? Or do they just want to make loans? And the landlord is the same monster that killed GYM BAR at that location.

A great way to get a handle on the problem would be if the City of West Hollywood would seize properties by way of eminent domain from monster landlords and, make them a public asset.