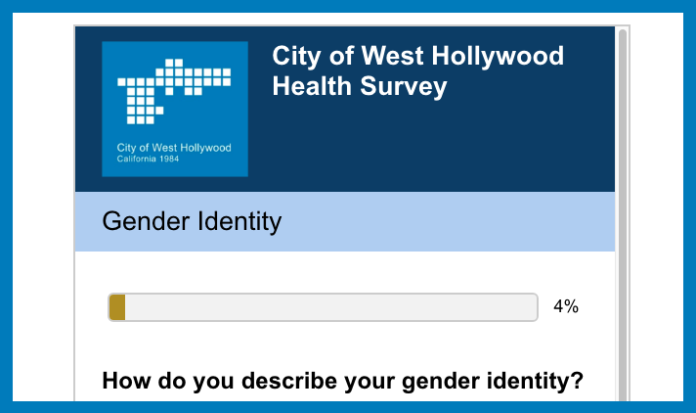 Are you gay? Trans? Bi? Lez? The City of West Hollywood launched a second round of a health survey seeking feedback about stigma experienced by community members as a result of sexual orientation, gender identity, or HIV status. The survey aims to advance the efforts of the City of West Hollywood’s Social Services Division in implementing the City’s HIV Zero Strategic Plan.

Community members, regardless of HIV status, are encouraged to provide feedback. This is the second HIV stigma survey conducted by the City. The first survey was conducted in 2017. The City is encouraging community members who have already responded to an earlier survey to provide feedback again. A goal of the survey is to track individuals’ experiences with stigma over time.

The survey is available to anyone on the WeHoLife website at weholife.org/survey. WehoLife, a program of the Los Angeles LGBT Center, works to end HIV stigma, reduce substance abuse, and stop the transmission of HIV in the community. The program is a key partner in administering the survey during the upcoming weeks.

Stigma and discrimination are potentially the most difficult aspects of HIV/AIDS to address. For people living with HIV, stigma is related to negative psychosocial, physical, and mental health issues such as social isolation, anxiety, and depression. Among HIV-negative gay and bisexual men and transgender women, sexual orientation-based stigma and gender identity-based stigma can negatively affect mental health, coping skills, and willingness to disclose important health information, which impacts healthcare access in everything from screenings to interventions, such as Pre-Exposure Prophylaxis (PrEP) and Post-Exposure Prophylaxis (PEP). The prejudice and discrimination resulting from stigma can be overt, such as barriers to healthcare coverage or employment termination, or subtle, such as social exclusion.

A goal of the City of West Hollywood’s HIV Zero Strategic Plan is to build an inclusive community that supports underserved groups and honors the contributions made by people living with HIV. Addressing stigma is vital to “getting to zero,” and the community’s input is an essential component of achieving that goal. Learn more by watching the City of West Hollywood’s short “Getting to Zero” video: