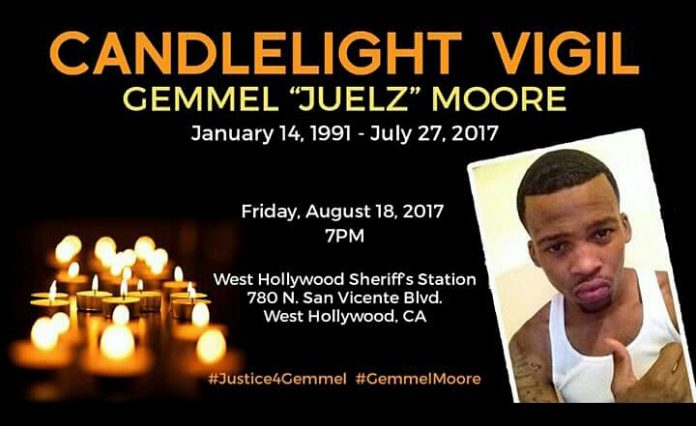 LaTisha Nixon, the mother of Gemmel Moore, the young man who was found dead from a fatal drug overdose inside prominent Democratic donor Ed Buck’s West Hollywood apartment on July 27, is joining family members, friends and supporters for a candlelight vigil on Friday, August 18 at 7pm. The peaceful vigil will be held outside the West Hollywood Sheriff’s Station located at 780 N. San Vicente Blvd.

“I want the community to come together. I want to bring awareness to what’s going on,” Moore told WEHO TIMES. “I just want the community to stand in solidarity. I also want the WeHo Sheriff’s Department to know that I’m not going anywhere. I want answers. I just feel that the whole case was mishandled horribly. The situation is not just about my son. It’s a city situation. It’s a worldwide situation. Addiction does not discriminate. My son could be anyone’s son. I am a mother hurt and I just want justice for my son. He cannot die in vain.” Authorities recently launched a new investigation into Gemmel Moore’s death. The Coroner’s Office had ruled it an accidental death caused by methamphetamine use. His mother and friends have questioned Ed Buck’s part in the fatal drug overdose from the moment they learned Gemmel Moore’s lifeless body was rolled out of Buck’s apartment.

The family retrieved Gemmel Moore’s journal that they feel supports their suspicions. Portions of it were published by social critic and political commentator Jasmyne Cannick, on her blog jasmyneonline.com. The journal describes a desperate cry for help from a young man in the throes of addiction and details a twisted entanglement with Buck, which includes illicit drug use.

“I pray that I can just get my life together and make sense,” Moore wrote in his journal. “I help so many people but can’t seem to help myself. I honestly don’t know what to do. I’ve become addicted to drugs and the worse one at that. Ed Buck is the one to thank, he gave me my first injection of chrystal [sic] meth. It was very painful but after all the troubles I became addicted to the pain and fetish/fantasy…”

“I just hope the end result isn’t death. Someone needs to save me soon. The only person in my corner is the person who turned me this way, the way I feel right now. Honestly, I don’t care to live anymore. I do wanna die. I feel like I’ve done way too much that this lifetime allows. If it didn’t hurt so bad I’d kill myself but I’ll let Ed Buck do it for now. Dec. 3, 2016, I miss my grandma.”

LaTisha Nixon is now flying to Los Angeles to collect the body of her first-born son (he was the oldest of five siblings). She is holding a funeral service for him the day after the candlelight vigil. The service will be at Simpson’s Family Funeral Home, located at 5138 S Broadway in Los Angeles, at 2:30pm. Gemmel Moore will be cremated. A second service will be held at his hometown in Texas at a later date. Mrs. Nixon says she never expected her son’s death would get so much national attention. She says the response has been mixed since WEHO TIMES first broke the story on August 7. “My little coupon life is no longer quiet,” she said. “My face and my son’s face is all over the internet. A lot of people from the LGBT–I hope I’m saying that right–have reached out and are thanking me for bringing awareness and for letting people know about the situation surrounding drug use. They’re sharing their personal experiences where they have been taken advantage of by other wealthy men who have hurt them. They tell me that they report it and nothing happens. Police reports come up missing. This is what they’re telling me.” Nixon hopes a diverse group of people are inspired to join the candlelight. “The candlelight vigil is not an LGBT thing. It’s not a black thing. It’s not a white thing. It’s an us thing,” she said. “Meth does not discriminate. Addiction doesn’t discriminate. Unfortunately my son passed, but in the process of him passing, it has brought a lot of awareness to a lot of these young gay black men who are being victimized. I had no idea. I feel so bad that I didn’t see the signs. I couldn’t save my son, so I’m just praying that someone else’s son or daughter can be saved.” She also hopes the candlelight vigil will bring awareness to drug addiction and inspire the West Hollywood Sheriff’s Department to make a thorough investigation into her son’s death. “I want justice for my baby” She said.