Exclusive Photos! Lady Gaga Parties at The Abbey for Born This Way Day

Lady Gaga had much to celebrate this past weekend. Her album Born This Way recently had its 10-year anniversary. She was presented with a key to the City of West Hollywood by Mayor Lindsey Horvath along with council members Sepi Shyne and John D’Amico. She was given a City proclamation declaring May 23, 2021, Born This Way Day. She was honored with a giant LGBT rainbow-inspired Born This Way street mural on Robert Boulevard. And it all went down in conjunction with the Abbey Food & Bar’s 30-year anniversary celebration.

Gaga was out of drag for the most part when she stepped out of a black SUV and walked down the newly installed Born This Way Street Lane. Her hair and makeup channeled Amy Winehouse (and a little bit of Snooki according to a WEHO TIMES reader). She kept it funky and simple with an oversized Born This Way t-shirt and that’s pretty much it. Ripped fishnet stockings, and hot pink club kid platform boots completed the look. 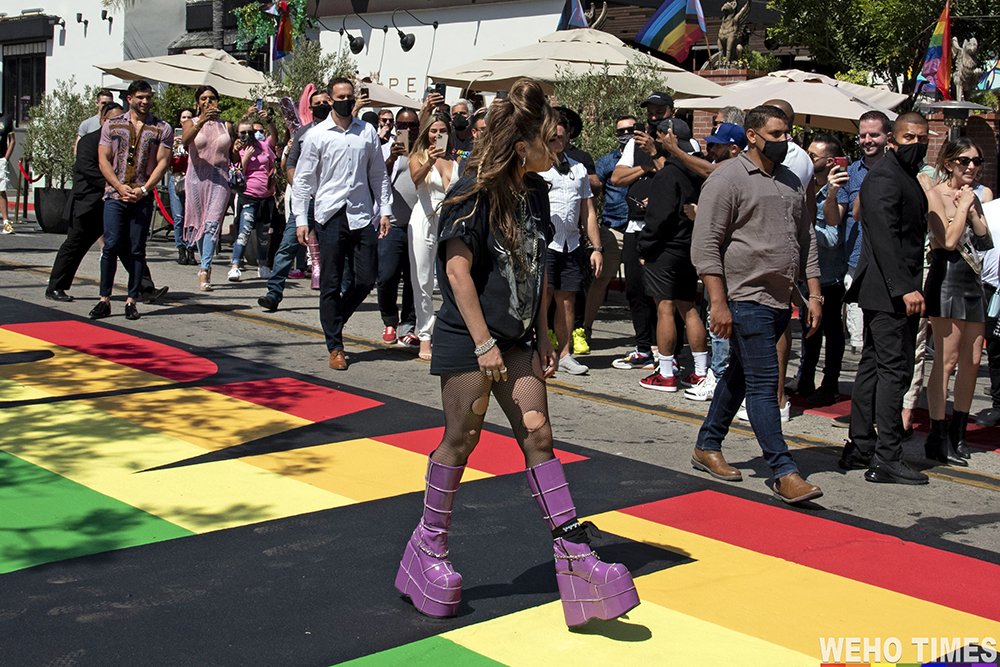 “I’m really the lucky one that’s here today,” Lady Gaga said in her speech after being presented with a Key to the City and a Proclamation declaring May 22, 2021 Born this Way Day. “Born This Way was inspired by a man named Carl Bean. A black gay religious man. A beautiful person who proclaimed who he was and was so strong and inspired me to make this song, to make this record. I’m looking at all of you and I would just like to congratulate you on a lifetime of relentless love and pride. Thank you so much for showing me what it means to be brave. What it means to persevere and really what it means to lead the world. I used to feel like a follower when I was a kid. Then I started to feel like a leader and I can promise you that all of you are leaders who are standing here today. Thank you for this key. You’ve been–I’m sure this will sound cheesy to some people, but not to me–you’ve been the mother fucking key to my heart for a long time. I’ll honor this and I’ll cherish this and I promise that I will always be here for this day.”

The real party happened at the back of the Abbey. Gaga was sealed off from the non-VIP with a velvet rope by the DJ booth area. She did some shots, and then danced and sang to her own music with some lucky fans, friends and members of the Gaga team. The DJ area was elevated, so fans had a clear view of the singer, who was only steps away. She took selfies with friends and even snatched some phones from the crowd below to film herself dancing and singing.

It was mostly Gaga having fun with a small group of people. RuPaul alumnus Changela, was part of the celebration (she was out of drag).

Singer Lance Bass stopped by with his husband, actor Micheal Turchin. They said their hellos and left her to continue celebrating.

West Hollywood Mayor Lindsey Horvath also stopped by to greet Gaga. They had a drink and a shared laugh.

And of course, CEO and Founder of The Abbey, David Cooley was not too off from his celebrity guest, making sure she was having a fabulous time.

No one wore a mask at the celebration, even though California law currently mandates masks be worn inside public businesses and public spaces and around large crowds. Social distancing was also impossible if you wanted in on the party, but this was a special occasion. It was Born This Way Day.

She is unrecognizable “out of drag” Also those boots look purple to me. Not hot pink.