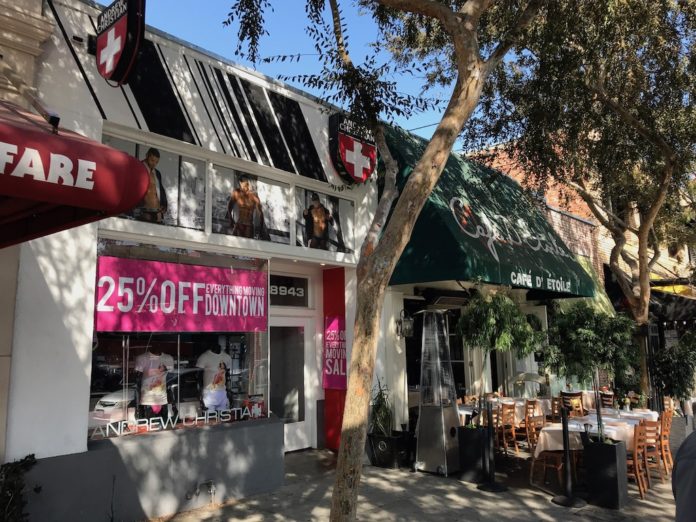 Andrew Christian is looking for gayer pastures in downtown LA and cites Boystown’s changing demographics and a “difficult” West Hollywood City Hall as the main factors for saying hasta la vista to WeHo.

Earlier this week WEHO TIMES reported on the impending closure of Andrew Christian’s West Hollywood Store at 8943 Santa Monica Blvd. Pink signage had gone up over the Andrew Flagship Boutique announcing that it was leaving WeHo.

Rumors swirled, some even from inside the store, that although the official announcement was made to employees last week, the Pepto pink signs advertising “25% off everything and moving to the new gayborhood downtown” had been delivered to the location months’  before.

WEHO TIMES’ Paulo Murillo reached out to AC’s main office and here is his exclusive Q&A with Joseph Sheridan, a rep for Andrew Christian and Christian himself:

WEHO TIMES: When is the official moving date?

Joseph Sheridan: We don’t have a specific date but it will likely be in January.

WT: What prompted the move out of West Hollywood?

JS: Andrew Christian has always been on the cutting edge of gay culture. Over the past few years, downtown has emerged as a diverse and energetic gay scene and we feel our demographic has moved there, and we feel we can serve them best in the new DTLA location. West Hollywood City Hall also makes it difficult to do business, which was a factor in the decision.

WT: Has WeHo changed–especially around Boystown–since AC first opened shop in the gayborhood?

JS: Yes, West Hollywood has increasingly become more straight over the years. Not that it’s a bad thing, but that means our core demographic has been moving across the rest of Los Angeles.

WT: What is the retail climate in WeHo? How are current sales at this location?

JS: The retail climate is still strong. Our sales have been steady over the past few years.

WT: What kind of moving sale specials are you offering?

JS: Right now, everything is 25% off. The discount will get progressively larger as we get closer to the move.

WT: Why offer a moving sale and not just transfer everything to the new location?

JS: We have a lot of exciting new styles coming out soon, so with the new location, we want to keep it fresh and start out with our newest product.

WT: Why was DTLA chosen as a new location?

JS: Downtown has quickly emerged as a hot new gay scene over the past few years. With the variety of gay bars as well as the new pride festival, DTLA Proud, which speaks strongly to the current generation, we felt downtown would be the best fit for us. As a company, we are constantly looking forward to what’s next, not what’s behind us.

WT: Are there particular neighborhoods/areas that you’re looking at in DTLA?

JS: We’re currently not disclosing specifics about the store location, but we are looking to be in the gayest section of downtown!

WT: What is some of the feedback that you are getting from your customers regarding the move?

JS: Our West Hollywood customers are sad to see us go, but our line will be available at other retail locations in West Hollywood so they will still be able to buy our latest styles. Additionally, many people have expressed excitement that we will now have a presence downtown and be accessible to a wide new base of customers.

WT: Will the new location offer everything you offer in WeHo, or do you plan to make changes to your merchandise?

JS: We will still offer everything we currently offer in our West Hollywood store, with constantly changing and updating merchandise to reflect the newest styles. We also are planning ways to reflect a younger and more urban demographic.

WT: How long has AC been in West Hollywood?

We have been in West Hollywood for 8 years.

WT: Will the WeHo employees transfer to the new location?

JS: Yes, our WeHo employees will transfer to the new location.

WT: Can you get me a quote from Andrew himself about how he feels about moving his store out of WeHo?

“I am thrilled to see the Andrew Christian brand constantly change and grow as we look towards the future. We have always been proud to be on the cutting edge of gay culture and feel that our current demographic fits in best with the invigorating and emerging LGBTQ scene in DTLA. I’m looking forward to becoming a part of the DTLA community!” – Andrew Christian