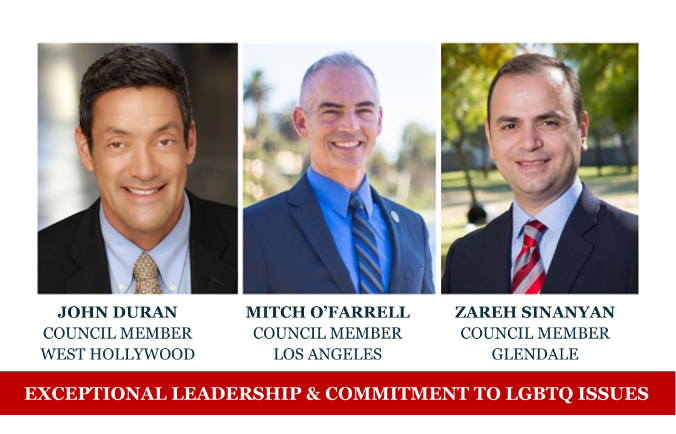 Equality Armenia is holding their first Annual Leadership Council and honoring public servants with a Leadership Award. The event is recognizing City of West Hollywood Council Member and Mayor Pro Tempore John Duran, City of Los Angeles Council Member Mitch O’Farrell and City of Glendale Council Member Zareh Sinanyan who have supported and championed the advancement of the LGBTQ rights.

Leadership Council is a forum acknowledging the leadership and achievements of local public officials in matters concerning the LGBTQ community. The reception offers stakeholders, community leaders and activists the opportunity to network with each other and meet cohorts from various communities and organizations. Mayor Pro Tempore John J. Duran is a native Angeleno and a resident of West Hollywood since 1990. He has been an elected member of the City Council since 2001. Mayor Pro Tempore Duran has a Juris Doctorate degree from Western State University College of Law and a Bachelor of Science degree in Business Administration from CSU Long Beach. He has been a lawyer in private practice since 1987.

Los Angeles Councilmember Mitch O’Farrell was elected to office on May 21, 2013 to succeed now Mayor Eric Garcetti as the Councilmember of the 13th district. The newly elected councilmember held a ceremonial swearing-in event at Marsh Street Park on Saturday June 29 2013, and started his term on July 1.

As an openly gay councilmember, O’Farrell has established strong ties within the LGBTQ community, including the Los Angeles LGBT Center, Bienestar, Equality California, and other advocacy organizations. It is of tremendous importance to him that no one regardless of gender identity, ethnicity, sexual orientation, or religious belief be marginalized in any way. He is determined to work with the organizations to provide services to those in the LGBT community, promote advocacy at the local and national level, and to pay tribute to the great and long history of the LGBT community in the 13th District. He has steadily maintained the visibility of the LGBT community and is working to elevate its place in mainstream society. In July 2013, Sinanyan supported the establishment of a memorial to Korean comfort women in the Glendale Central Park, over the objections of the government of Japan and dozens of Japanese-Americans. Sinanyan spoke at the unveiling of the memorial in late July, citing his own background as the grandson of an Armenian Genocide survivor and asserting: “The best way to resolve conflicts…the best way to heal wounds…is to acknowledge them. My people, my grandfather, were subjected to a horrible, horrible crime…To this day, because no apology has come, no proper acknowledgement has come…the wound is deep, it’s festering, and there can be no moving forward without it”.

The Equality Armenia Leadership Council is an invitation-only event that will be held on Thursday, March 29, 2018 from 6pm to 8pm at the Glen Arden Club in Glendale, 357 Arden Avenue, Glendale, 91203. The two-hour event will include a one-hour meet and greet cocktail reception, followed by the awards presentation.

Equality Armenia is a nonprofit organization dedicated to achieving marriage equality in Armenia. Their mission is to encourage and facilitate a constructive dialogue in Armenian communities about LGBTQ inclusiveness, equal rights and equal protections under law. The organization brings an inclusive and progressive voice to the Armenian people and its diverse diaspora by forming strong partnerships, facilitating public discourse and participating in civil engagement.

For more information on how you can become an active member of Equality Armenia, visit equalityarmenia.org