The nail-biting continues as Los Angeles County Registrar-Recorder/County Clerk posts the latest West Hollywood General Municipal Elections update on Monday, November 14, 2022, 3:32:03 p.m. New numbers still show incumbent and current West Hollywood Mayor basking in a solid 17.11% lead with a total of 4,942 votes, placing her at the very top, guaranteeing her winning one of three seats in the race for West Hollywood city council.

Returning candidate John Heilman holds to his second spot with 3,217 votes, but only has a 262 vote gap between he and Chelsea Buyers who has jumped from the number five spot to the number three position with 2,955, knocking former West Hollywood council member and Mayor John Duran from the top three position. Duran currently has 2,945, a 10 vote gap between he and Byers. Byers also pushed Robert Oliver to number five with his 2,892 votes, but he is only 53 votes away from Duran.

Zekiah Wright is also tightenging the gap between them and Oliver. Zekiah has 2874, which is only 18 votes behind number five.

This is one of the tightest West Hollywood races in recent memory. A total of 81 votes separate third and sixth place. 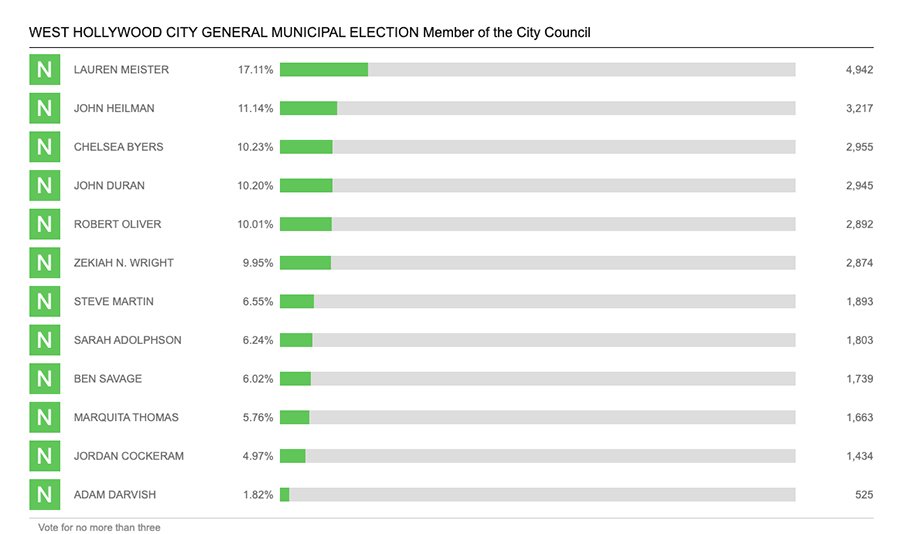 Must have helped a lot of seniors mail in those ballets. Maybe the union paid for some people’s vote…cause there is no way in hell.

In other news, pigs have developed a skill to fly.