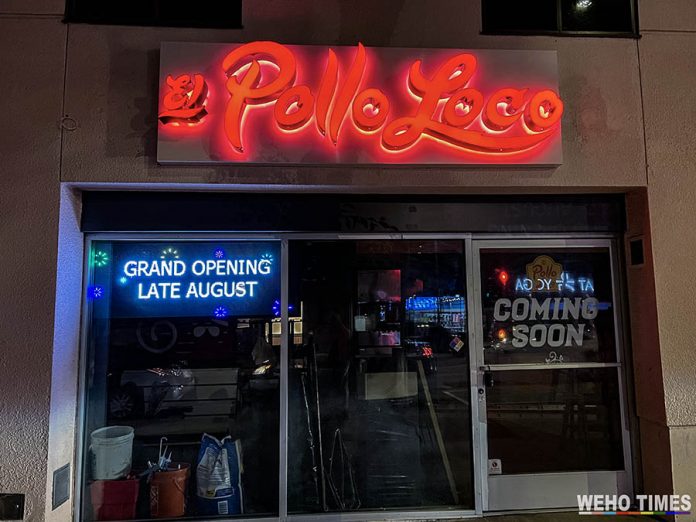 El Pollo Loco West Hollywood has officially announced its intent to open at 8601 Santa Monica Boulevard in late August. Scrolling signage on their front window states that they are currently hiring and opening at the end of this month. The new grilled chicken restaurant chain is opening below Trader Joe’s on historic Route 66.

The famous logo went up on the front window of the empty space located on the corner of Santa Monica Boulevard and Westmount Drive (below Trader Joes) in mid-October stating that El Pollo Loco is coming soon to West Hollywood. The wait may soon be over.

The grilled chicken restaurant chain is taking over the space that was briefly occupied by 85°C Bakery Café WeHo in 2019. The Taiwanese-based bakery closed after being open for about a month. It had its official opening on April 12, 2019 and by May 15th, the baked goods were scrapped and the space has been empty for a little over two years. Before 85°C Bakery Café, the space belonged to Fit Foods for several years before it also closed for good.

The new business will fill a void left made by the closures of WeHo chicken bistros like Koo-Koo-Roo in 2013, and the shuttered departed Coco Queen. However, this time, the chicken will actually be somewhat affordable.

El Pollo Loco which is Spanish for “The Crazy Chicken”, is the name of two independent restaurant chains that are controlled by different companies on in Mexico, and the other in the United States. Both companies specialize in Mexican-style grilled chicken and were founded by Juan Francisco Ochoa.

Ochoa established the first restaurant in Guasave, Sinaloa, Mexico in 1974 and then expanded his chain into the United States in 1980. Ochoa then sold his U.S. restaurants in 1983, which became El Pollo Loco, Inc., while keeping the ones in Mexico, which became El Pollo Loco, S.A. de C.V. Both companies have since occupied non-overlapping global territories and have offered different fare.

The chicken fast food joint has grown in the past four decades with over 480 restaurants across the United States. The closest location to West Hollywood was on 1260 N Vine Street, about three miles away.

I’ve been missing having an El Pollo loco within walking distance ever since they closed the El Pollo Loco location that was at Sunset and Crescent Heights Blvds because they were planning on tearing down the building to build the gigantic Gehry building in its place.

Are you kidding me? West Hollywood is a food desert, lacking the good international bites that LA is known for. There are way too many burger joints and pretty Insta-b*tch places. Cheap non-American food, even a chain like El Pollo Loco, is very welcome.

Now, we need to get some Korean and Central American places around too.