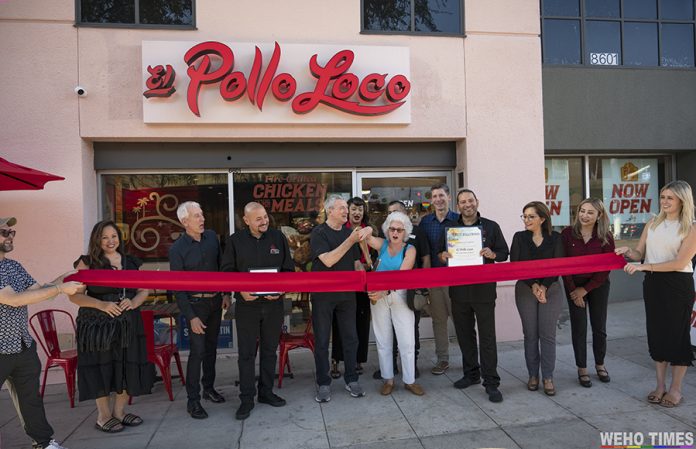 “Ribbon cuttings have been a part of the Chamber of Commerce for some time,” said Vice Chair of WeHo Chamber Membership, David Wood, who presented the owners with a framed buck for good luck. “They may seem corny to some, but they are not corny to me because they represent hope for the future. Here is hoping that this dollar turns into a million dollars in the many years to come.”

“The ribbon cutting was very nice,” Wajntraub told WEHO TIMES. “People are very happy we are here. They used to visit us when we were on Sunset and have been asking every month when we were opening at this location. We found this space three years ago and it took us one year to open. It usually takes three months, but hopefully the wait was worth it. People seem very happy.”

Mayor Meister skipped the free food available at the celebration and paid for her own meal to go. She ordered the 8-piece family dinner with thighs and legs and a side of mashed potatoes and corn.

The owners originally opened the Pollo Loco at 8154 Sunset Blvd on the corner of Sunset and Crescent Heights Boulevards 34 years ago. That location closed at the end of 2019 due to the property being torn down for a giant redevelopment project.

“It was built by the effort of many people,” said Wajntraub. “We actually rented the lease after the Vietnamese bakery closed. It was a lot of work. The setup looks spacious. Everything is new. We can sit 50 people inside and we plan to build a patio out front to accommodate more customers, but that won’t be until later in the future.”

Why is there NO mention regarding El Pollo Loco’s discriminatory position against gays and the prior gay marriage “debate” which they invested thousands if not millions of dollars to defeat? I will NEVER eat there!

its disgusting that you would try to ruin a new local WeHo business over an old news story where one franchise made a donation to overturn prop-8 over seven years ago. Google “El Pollo Loco anti-lgbt” and you get the complete opposite. They are LGBT inclusive and pro trans. You must be confusing them with Chic-Fillet. Get your facts straight.

Disgusting? Really? ANY form of discrimination is NOT acceptable…even if isolated or if it occurs once! SHAME on you CRAZY CHICKEN for normalizing HATE! And no, I did not “confuse” them for Chic-Filet…which I have NEVER supported EITHER! I am not confused. I KNOW WHO MY ENEMIES ARE!
Do you…even care?