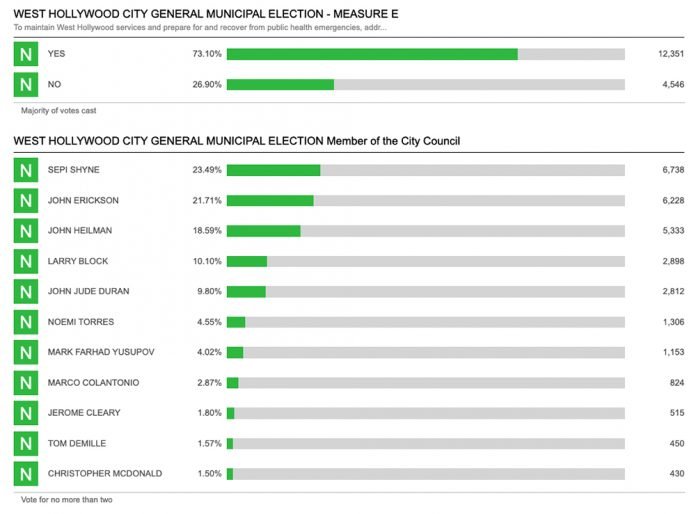 The order of ranking has been consistent throughout Election Night with Naomi Torres in sixth place, followed, by Mark Farhad Yusupov, Marco Colantonio, Jerome Cleary, Tom Demille and Christopher McDonald.

Larry Block has already resigned to a Shyne and Erickson win. “Looks like a momentous night,” he posted on his Facebook page as votes were still counted. “Congrats Sepi Shyne and John Erickson.”

Duran also went on his Facebook page to acknowledge that he likely did not win this time around. “It appears that both John Heilman and I are not going to be re elected to Weho Council,” he wrote on his timeline. “At this point, only the absentee ballots are in. Still waiting for day of the election ballots to be counted and reported this afternoon.
But it looks likely that the voters wanted change and fresh faces at city hall. If this is the case, we all need to support the new council members because they will have a heavy lift immediately in dealing with a public health emergency and West Hollywood economic collapse. I will wish them well and will offer to help anyway that I can. But still have to wait for the votes to be counted later today. There are thousands of uncounted ballots still.”

Shyne is not declaring victory just yet, but she is pleased with the numbers thus far. “I want to thank all of our supporters for all you have done for our people powered campaign,” she wrote on her Instagram account. “The early numbers look great and we are still waiting for more results from the County Registrar. As soon as we have more numbers in the coming days, we will make a statement. Much love and gratitude to you all! 💗”

Early numbers also project that Measure E will pass. If it passes, Measure E will enact a ¾ cent local sales tax to address the COVID-19 shortfall, and maintain the services West Hollywood residents.

The General Municipal Election for the City of West Hollywood is consolidated: election results and counting of ballots is being conducted by the Los Angeles County Registrar-Recorder/County Clerk’s Office.

Below is information as it relates to election results and ballot-counting for the General Municipal Election: