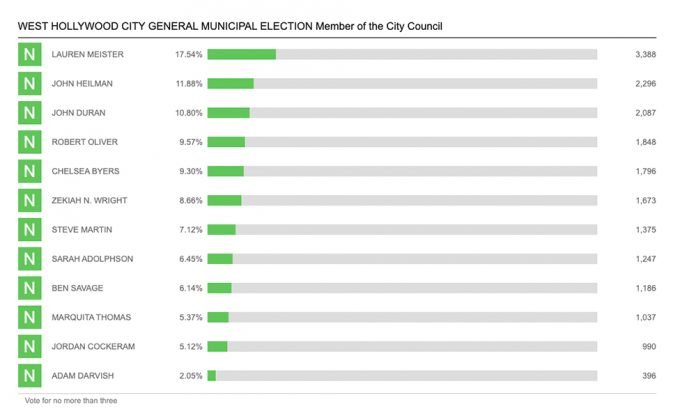 “It appears that Lauren Meister, John Heilman, and I have all won seats at WeHo Council,” posted John Duran on his Instagram account earlier this morning. “So grateful. Thank you West Hollywood Voters! We’re back on track.”

However, it is still too close to call. Duran has a 239 votes lead to Robert Oliver who has 2,087. The gap could change as more ballots are counted.

In other Villanueva fails, County Measure A, which is a Charter Amendment providing authority to remove an elected Sheriff for cause, is likely to pass with its early standing at 68%/838,980 votes. The measure grants the Board of Supervisors authority to remove an elected Sheriff from office for cause, including a violation of law related to a Sheriff’s duties, flagrant or repeated neglect of duties, misappropriation of funds, willful falsification of documents, or obstructing an investigation, by a four-fifths vote of the Board of Supervisors.

The Los Angeles Board of Supervisors race is currently tight with Bob Hertzberg having a 50.78%/4,104 votes lead over West Hollywood council member Lindsey Horvath who is not far behind at 49.22%/129,838 votes.

Fantastic! Disappointed in the sheriff’s results. Let’s get West Hollywood back on track!