Members of the DTLA queer community are mourning the loss of nightlife visionary Nacho Nava, who some consider the Father of Queer Underground in Downtown Los Angeles. Nava passed on Saturday, January 19. Sources say he lost his battle to pneumonia.

Nava was the cofounder and programer of the Mustache Mondays Party, which debuted in Downtown Los Angeles in late 2007. The event is credited as one of the first queer spaces that sparked a queer art movement in DTLA back when there were only a few small gay bars like the New Jalisco bar and the Silver Platter, which mostly catered to an all Latin gay crowd. Score, DTLA’s oldest gay bar had already closed in 2005.

Nava and his friends DJ Josh Peace, Danny Gonzales and DJ/artist Dino Dinco launched Mustache Mondays at the Crash Mansion in late 2007, hoping to “bring back some of the excitement of the great punk and arts institutions that had disappeared from downtown,” Nava told daily.redbullmusicacademy.com back in 2017. “This was before the developers really started coming in for the lofts, and it was mostly artists and people living cheaply. Nobody else wanted to set foot downtown.”

Mustache Mondays is known for making a spectacle and catering to queer legends like The House of Xtravaganza, Yoko Ono, Robyn and Florence Welch pop. Artists include Arca, DJ Rashad, Bonde do Rolé, Venus X, Spank Rock, Le1f and Diplo have also headlined at this event. It was also a platform for underground queer artists, especially queer artists of color.

“Dirty Looks is devastated by the passing of Nacho Nava,” the non-profit bi-coastal platform for queer experimental film and video, posted on their Facebook timeline. “…We’re humbled to have had the opportunity to work with him last year – his kind of community building really knows no parallel. What he accomplished with Mustache, organizing weekly events for an entire decade, is a testament to his generosity and warmness towards everyone that crossed his path. And to those artists working within his close-knit circle – Rafa, Rudy, San Cha, Sebastian, Ron – he provided so much support, love and a platform to perform, thrive, fail, play, and release. We’ve gathered some responses from those of us who worked together on the program in this difficult time.

“We lost Nacho Nava today, Capricorn visionary who could execute those visions with precision,” Raquel Gutiérrez added to the post. “The father of a queer and brown underground nightlife, he generously gave us Mustache Mondays, he generated radical possibilities his children could inhabit.”

“It’s not enough to say Nacho Nava created space, which he definitely did, for so many of us in L.A.’s queer communities, posted added Graham Kolbeins. “He wasn’t content to merely provide a platform– Nacho actively uplifted so many people and made it look effortless. He had a rarified blend of pure enthusiasm and genuine belief in each of our capacities and worth. The impact Nacho had on nightlife, music, art, and culture over this past decade cannot be overstated. His loss represents a chasm in our community that will never be filled.” Graham Kolbeins

“Nacho Nava WAS downtown for me,” posted long time friend K. Joy Schilling. “He was all of the energy and lights that encompass it – in all things that brought me joy there, I see him. I truly don’t know LA without Nacho in it. He was my first friend, my roommate when I moved here, the first one to say good morning and good luck on my first day of work and “goodnight booder” on my first night in my first place in a new city – and the truest definition of a real ride or die friend.” 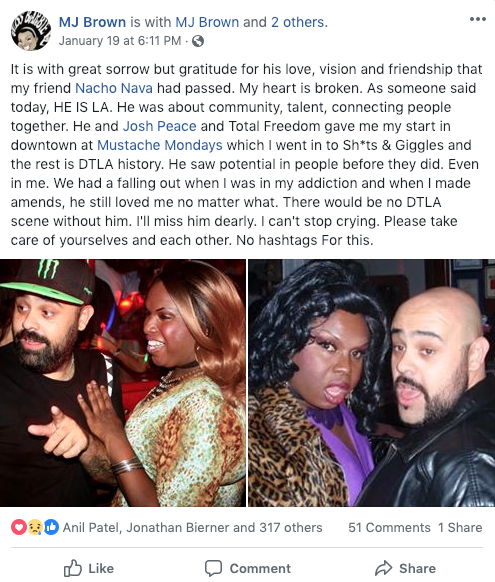 “Today I lost my son/brother/friend Nacho Nava,” posted artist Hector Xtravaganza Franco. “Mustache was the first gay club in dtla circa 2007 for all freaks / artist /dj’s to have a home that were not from the normal world. I had the pleasure to showcase my art. For over 10yrs + hosting and dancing every Monday night. Most people don’t think out of the box so l was always a drag queen to them. To nacho l was and am a performance artist. Nacho saw this in me and gave me a platform to showcase it and to find out who l really am.”

There are no details yet on a memorial service.