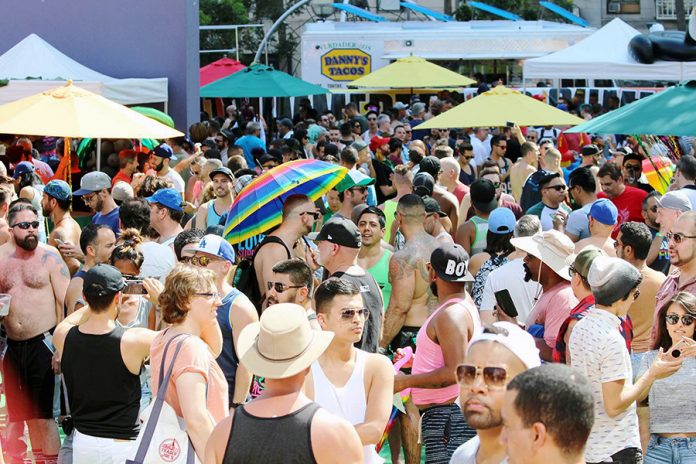 The DTLA PROUD FESTIVAL returns this weekend for a 2nd round of out-of-the-box and end-of-summer fun. Last year’s event attracted an estimated 9,000 people to Pershing Square in the Bunker Hill area of Downtown Los Angeles. This year will probably be much bigger.

The event was a magnet for everything weird and crazy and fun last year. Not to be shady, but it was the exact opposite of LA Pride with its colorful hipsters, drag queens, bearded lumbersexuals and everything in the alphabet from LGBTQIXY and Z. Let’s be honest, the DTLA Proud festival has been a welcoming and badly needed change to the usual Pride experience. For those who missed the memo, Downtown Los Angeles has been experiencing somewhat of an LGBTQ boom these last couple of years. A gayborhood with gay bars and LGBT friendly events have sprouted throughout the city. The DTLA PROUD Fest was only a matter of time. The event was born from the idea of an all inclusive community that represents the diverse population that lives, works and plays in downtown.

The 2nd annual festival will be jam-packed at Pershing Square once again for two consecutive days from 12:00pm, until 10:00pm. Visitors will get a blend of local queer culture, art, history and entertainment with over 40 community and retail booths, food trucks and a main stage hosted by the Boulet Brothers and the return of Summertramp, a pop-up water park that will transform Pershing Square into a colorful urban oasis. This year attendees will also be treated to an all LGBT Mariachi band. The event received the blessings of local leaders like councilmember Jose Huizar, LA County Supervisor Hilda Solis and Assemblymember Miguel Santiago. They participated at the event last year and championed the festival’s mission. On August 7, 2016, the California State Assembly presented us with a Certificate of Recognition for our dedication to the Downtown Los Angeles LGBTQ Community.

It’s going down this weekend. Be DTLA Proud. The DTLA Proud Festival is what everyone has been waiting and calling for in the heart of Los Angeles.

The lineup for this year is as follows:

Click here for more information on the stage schedule.