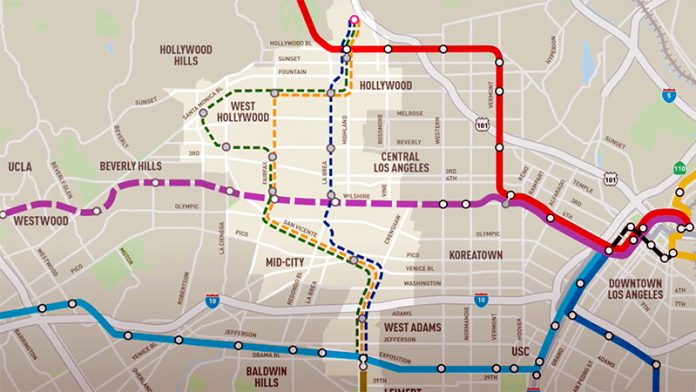 The City of West Hollywood is getting the word out that Metro is starting the formal Environmental Impact Report (EIR) process for the Northern Extension of the Crenshaw/LAX line, the project that could bring a WeHo light rail service.

As part of that process, Metro will be hosting three two-hour virtual scoping meetings to determine what to include in its analysis, which will ultimately help Metro to select the final route and get the project shovel-ready for construction.

“It’s important that Metro gets feedback from the community members who will be using Metro rail service to our city and to connect the region,” said City of West Hollywood Mayor Lindsey P. Horvath. “The City of West Hollywood is one step closer to realizing our vision to #FinishTheLine, building on years of progress, advocacy, and community support for more transit opportunities. The Crenshaw Northern Extension will provide critical north-south connections and enhance the existing Metro regional rail network, which is excellent not only for West Hollywood — it’s also a wonderful step forward for the entire metropolitan region.”

West Hollywood residents and community members are encouraged to attend one of Metro’s upcoming virtual meetings to let Metro know what issues and design considerations matter to them, as well as what destinations and route alternatives should be included in Metro’s study. The meetings will each cover the same topic and general information and will take place by Zoom, as follows:

For community members who wish to provide feedback but who cannot attend any of the scheduled virtual meetings, email comments may be sent to Metro directly at  crenshawnorth@metro.net or may be submitted by calling Metro’s project hotline at (213) 418-3093. More information including project updates and background information is available at www.weho.org/rail

The City of West Hollywood and its coalition partners have built momentum on a proposal to accelerate the completion of the Crenshaw/LAX rail line Northern Extension to as early as 2028, instead of 2047, in time for the Los Angeles 2028 Olympics and Paralympics. The West Hollywood City Council, in 2015, first approved its plan in support of a Metro rail line Northern Extension to connect to the Crenshaw/LAX rail line.

The regional impact of the Northern Extension cannot be underestimated. It will have a strong impact on many communities that are currently underserved by access to a rail line and will more conveniently connect the Los Angeles International Airport to the San Fernando Valley. It will also mean more mobility options to and from the City of West Hollywood and more convenient access to key healthcare and employment centers such as Cedars-Sinai Medical Center and the Pacific Design Center, as well as cultural and entertainment destinations such as The Grove and the Hollywood Bowl.

The Northern Extension will create more equitable and convenient regional access and improve the overall efficiency of the transit system, which will benefit transit-dependent residents throughout the metropolitan area.

For more information, contact David Fenn, City of West Hollywood Associate Planner, at (323) 848-6336 or at dfenn@weho.org.