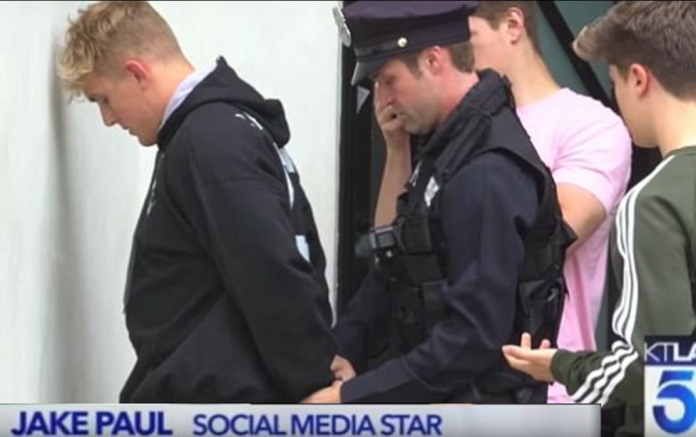 Kids will do the dumbest and damndest things for attention these days. YouTube vlogger (over 8.5 million followers), prankster and Disney character Jake Paul, has been making headlines for wrecking havoc at the fancy West Hollywood adjacent neighborhood known as Beverly Grove where he currently resides with his Team 10 “squad” of mostly barely-legal-looking boys.

The 20-year-old known for his portrayal of Dirk in Disney Channel’s Bizaardvark (you read that correctly people—DISNEY! When did that become cool?), could face a class action public nuisance lawsuit from his neighbors for the crazy stunts and rowdy parties he likes to throw to feed his YouTube channel.

His media whore antics include publicly publishing his home address (636 N. Kilkea Dr., but you did’t get to from us) to encourage hoards of little girls (or “Paulers” as he refers to his 12-year-old Disney fans) to gather outside his home and cause a ruckus in the neighborhood.

He also had people talking when he filmed himself throwing a Harley Davidson motorcycle into his pool, or when he jumps on a trampoline from his roof, but what really burned his neighbors up was when he threw a bunch of furniture into an empty pool and started a bonfire. The flames were so high, they threatened to burn down the entire neighborhood. Reporter Chris Wolfe of KTLA 5 News showed up outside Paul’s residence and the self-proclaimed “everyday bro” could not resist from making a scene. He ran up and down the street screaming like a deranged man/boy who either forgot to take his ADHD medication, or he accidentally double-dosed on it.

He and his squad climbed the KTLA News van. Footage shows him riding his motorcycle up and down the street and popping wheelies. And while he acknowledged that he felt bad for his neighbors, he quickly dismissed them because… “I mean, people like going to circuses.”

“It used to be a really nice, quiet street and now we’re just like this war zone,” neighbor Maytal Dahan told KTLA 5 News. “We’re families here and we’re more than happy to have them live here if they are respectful of their neighbors.”

The KTLA 5 visit was like feeding furniture to a flame for the attention-seeking social media “influencer.” The next day a video surfaced showing Paul getting arrested and a rumor spread that he and his Team 10 had been evicted from their home. The footage appears to be faker than the color of the bleach blond bangs covering the freshly popped zits on his forehead. The acting in the footage is horrible, and while the police car looks legit, the arresting officer looks like he’s a 12-year-old “Pauler.”

You be the judge.

Paul thrives on drama and whatever will get a click on his YouTube channel. Earlier this year he earned himself a visit from the Secret Service after he filmed himself hiding in the bathroom of the Eisenhower Executive Office Building after attending a Social Media Event at the White House. He claimed that he spent several hours there before leaving in the early morning, but of course, that too turned out to be a dumb hoax.

Neighbors told KTLA that they are having a meeting with special leaders, police and code enforcement officials to try to get a handle on the Jake Paul situation.

And now let us leave you with this horrible rap video of “Everyday Bro” starring Jake Paul and his Team 10. It quickly rose to the tenth spot as the most disliked video in YouTube history.