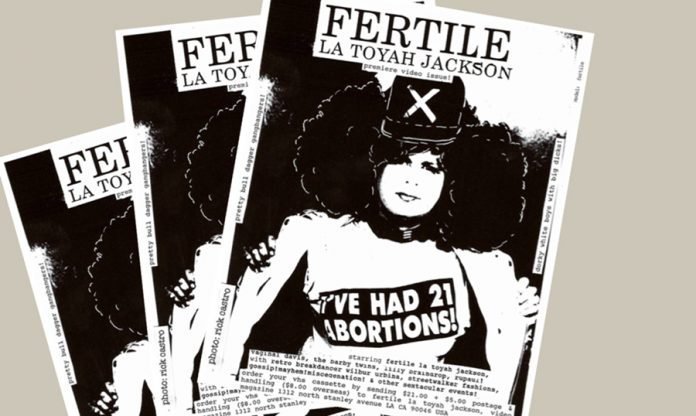 Vaginal Davis takes us back to some vintage West Hollywood history via her video mag.

Davis launched her groundbreaking publication in the late 1980s. The photocopied zine brimmed with local art and music factoids, with styling and photos by Rick Castro (working under the alias Beula Luv at the time), pieces of celebrity gossip and quickly established the queercore music scene by detailing (one could argue “exaggerating”) Ms. Davis’ musical projects: Cholita; The Afro Sisters; Black Fag; and Pedro, Muriel and Esther. Davis established herself as an erstwhile chronicler of the alternative musical movement. The old Tower Records on Sunset Boulevard even signed an international distribution deal for the black & white 8.5×11 publication. Dennis Cooper likened its contents to Kenneth Anger’s Hollywood Babylon series, on account of its insider gossip, celebrity sex stories and fantastic lore that the Davis presented as fact. 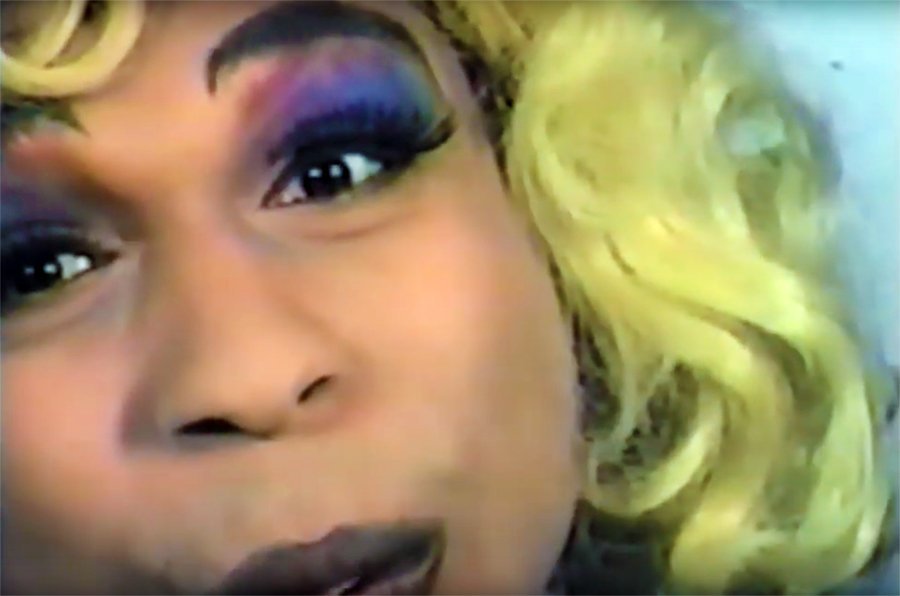 In 1994, Davis teamed up with Rick Castro (Hustler White) to bring Fertile to life via VHS. Together they created two video volumes of the zine, which captured the zeal of the publication, but also documented Los Angeles in transition, as shows like Melrose Place began to make their city streets a mass culture stomping ground. Posing as an MTV VJ, Davis walks the Santa Monica strip for segment “Streetwalker Fashions” interviewing the trans sex workers there, transforming the boulevard into a red carpet affair as she asks, “who are you wearing?”

Other chapters depict lost West Hollywood haunts like Eat A Pita, The French Marketplace and the mirrored hustler haven, Numbers restaurant and bar. Brimming with local talent, like Taste of Latex editor, Lily Burana, Iris Parker of Madame X, and a little known drag queen RuPaul even makes an appearance, as she promotes her breakout single “Supermodel” and sits for a one-on-one interview with Ms. Davis.

Dirty Looks will screen a new restoration of Fertile La Toyah Jackson Volume 1, produced with the support of the City of West Hollywood Arts Division’s Transgender Arts Initiative, under the stars of West Hollywood and in the former hustler haven of Plummer Park. Copies of Dirty Looks Volume 4 will be distributed at the event, featuring a chapter chronicling the title, with contributions by Castro, Joshua Chambers-Letson, Rudy “Bleu” Garcia, Brontez Purnell and Linda Simpson.

Rick Castro is a Los Angeles-based photographer, filmmaker & writer known for his work that focuses on fetish and desire. In 1994, Rick’s VHS footage of hustler interviews inspired Bruce LaBruce to collaborate as co-directors/writers for the film Hustler White in (1996). The film was a great success internationally and is listed by the Los Angeles Times top 100 underground films of the 20th century. Castro also directed a documentary for MTV called, Plushies & Furries, (2001) the first mainstream project about the furry community. Fertile LaToyah Jackson video magazines, (1994) are examples of Castro’s early raw, jovial film work with then unknown “blacktress” Vaginal Davis as star.

Vaginal Davis is described as the internationally revered intersexed doyenne of intermedia arts and sciences. She takes public discourse to Dementia 13 levels as she spells out the queer and blatino experience in her own inimitable fashion, creating new words out of thin air and crashing bull in a Madame Mau China Shop style over notions of propriety and reality.

This event was made possible with the support of the City of West Hollywood through a Transgender Arts Initiative grant.

Editor’s note: Vaginal Davis is not play the character of Fertile La Toyah Jackson as originally reported in this piece. The article was updated with the correction.