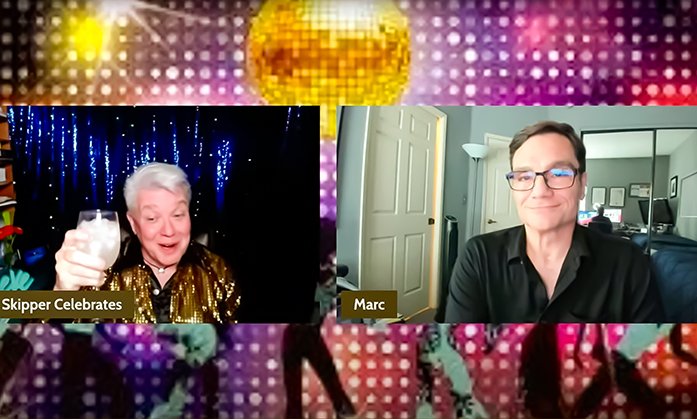 Marc Saltarelli, the director of the highly anticipated Studio One Forever documentary, joins the Richard Skipper Celebrates show to discuss the long gone, but never forgotten Studio One Disco. The interview also shows never-before-seen scenes from the documentary, which is on its final stages of completion.

The discussion delves into Studio One disco when the dance club was a mecca for gay men looking for identity in a world that saw them as outcasts.

The documentary synopsis states that Studio One was more than just a disco, it was mecca for gay men looking for identity in a world that saw them as outcasts. In 1974, the disco craze was just beginning to sweep the nation when Scott Forbes, a gay optometrist, had a vision to open the first gay disco in West Hollywood. He wanted to give young gay men a sense of the Hollywood glitz and glamour they craved. Temperatures rising, flashing strobe lights. Disco reverberating through our bare chests. And swarms of a thousand irresistible men with flirtatious smiles that were welcomed and returned. Everybody wanted to be at Studio One, but women and people of color were often denied entry. Protesters picketed the club entrance and a boycott happened. But the lines around the block only grew longer. Before Studio One, gay bars were shuttered with secret entrances. Gay men faced hate and homophobia, police brutality and violence, even death. Studio One changed all of that. Once inside, young gay men would climb the Studio’s dark staircase, cast away their existential fears, and find Heaven.

Not satisfied with just owning a disco, Forbes’ turned part of the massive club into The Backlot Theatre, a New York-style cabaret show room. Suddenly, every major star of the era began frequenting the club, including Cary Grant, Bette Davis, Rock Hudson and more. It integrated gay and straight Hollywood for the first time, with many stars strolling over to the disco for a dance after the show. The Backlot put Studio One on the map. Outrageous comics Like Joan Rivers, Charles Nelson Reilly, Wayland Flowers & Madame, and Divine were regulars, while up-and-coming stars of the time, like Roseanne Barr, Rosie O’Donnell and Sam Harris were launched to stardom from The Backlot.

The Studio One Forever Documentary is still raising funds for music licensing. The support the effort, visit Marc Saltarelli’s webstie at https://marcsaltarelli.com/ or click on the gofundme campaign at: https://www.gofundme.com/f/studiooneforever

Marc Saltarelli is an award-winning director with both narrative and documentary credits. He has directed seven narrative films that have screened collectively in over 250 major film festivals worldwide, including OutFest Los Angeles, Palm Springs ShortFest, Hollywood Film Festival, BFI London, Barcelona and Mumbai Film Festivals. The films were acquired for domestic television on MTV Networks (Logo) and internationally on Canal + Television. Marc’s film WHERE WE BEGAN was honored at the PlanetOut Short Movie Awards brunch held at the Sundance Film Festival. Three of his films were Official Selections of the BFI London LGBT Film Festival and screened in the National Film Theater in London.

In 2018, Marc directed, shot and edited I KNEW ANDY WARHOL, a documentary featuring interviews with artists and contemporaries of icon Andy Warhol. Artist Ed Ruscha, photographer Michael Childers, actor Udo Kier and Warhol superstar Cherry Vanilla were among the participants. The film was part of the Warhol exhibit at Palm Springs Art Museum. The film won Best Short Documentary at the Hollywood Reel Independent Film Festival and is an official selection of the Provincetown Film Festival. https://www.provincetownfilm.org/fest…

TO COMFORT YOU, starring Pauley Perrette (NCIS) and Susan Blakely (This Is Us) won best picture and best drama awards at the Beverly Hills Shortfest. Pauley and Susan shared best actress as well.

Music rights can be very expensive. Ever wonder why Miami Vice/WKRP in Cincy is not still shown? They can’t afford the music rights any more!

I’m really looking forward to this documentary. I hope it does not become your generic things were great then AIDS hit, and everyone died like what we got with Circus of Books pretty much any gay related documentary. Regardless it seems like it will be a good look back to what once was.

The Backlot night club was awesome. I saw Anita O’Day, Charles Pierce, Wayland Flowers and Madame performed at the club way back in the day. Richard Deacon and Charles Nelson Reilly could be seen schmoozing with the cuties.