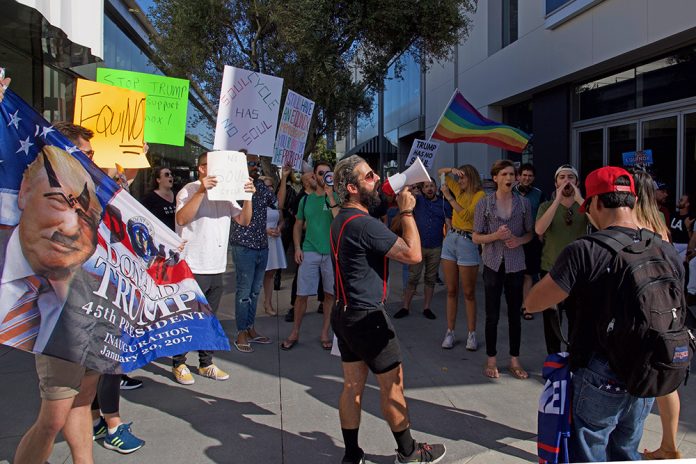 According to a press release by the organizers, “The protest aims to encourage gym patrons to cancel their memberships and discourage Mr. Ross and others from supporting Trump’s re-election.”

Over 50 demonstrators showed up with rainbow flags and anti-Trump signage outside of 8590 Sunset Boulevard around 4pm. 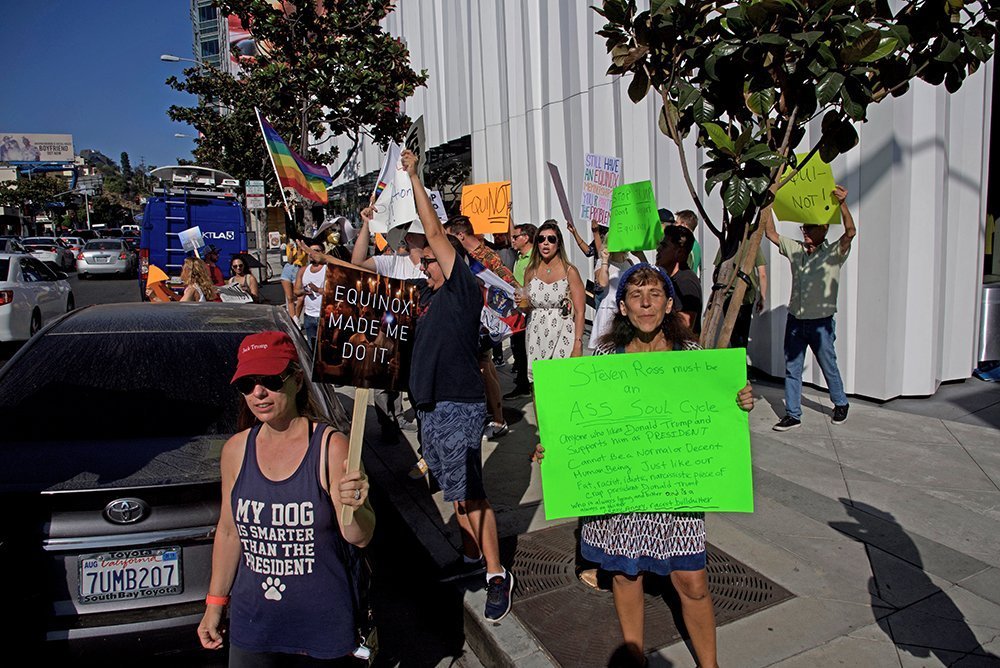 “There was a moment of disbelief that this brand that we all know to be a good operator is now funneling money to this man who is supporting Trump,” said West Hollywood resident and organizer, Adam G. Bass. “How dare you come into our community–this location is on the Sunset Strip in the heart of West Hollywood–you’re coming into our community, taking our money and spending it what goes counter to our community.”

Bass said his co-worker Gonzalo Garcia were immediately motivated to organize the protest in less than 40 hours.

“Gonzalo and I work together,” he added. “We said, we can’t be the type who just post some stuff on social media. We jokingly said, ‘let’s have a protest. I’m fine if it’s just you and I with signs, so let’s do it,’ and it literally took about 45 seconds of thinking before we decided to do this.”

“I’m very happy with this turnout,” Gonzalo Garcia said. “Adam and I said, if it’s just the two of us holding signs, at least we’re getting the word out. The fact that there are 50-plus people here being loud is great. I’ve never formed a protest before. I was angry. Especially after the weekend with the shootings and there’s no gun control. People are being locked in cages in the border and it’s sort of boiling over. I think this event is going to create visibility and get people to wake up and realize that they need to be looking at where their money is going.” 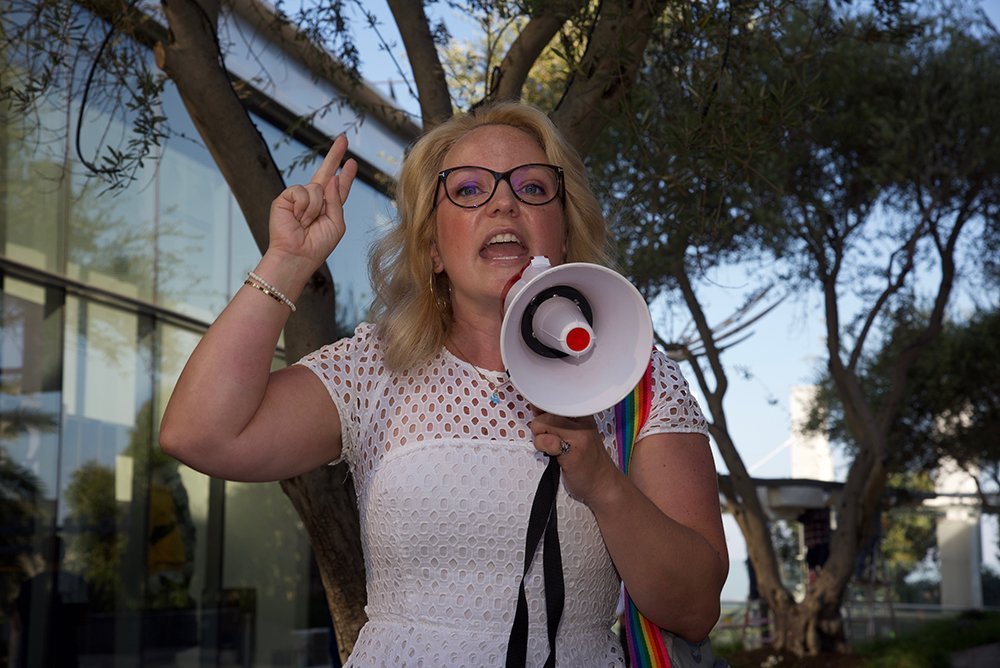 “I’m happy to be here today to stand in solidarity with members of my community to make sure that every opportunity we have, we take to resist and to fight back against a racist, homophobic regime that’s in office right now,” West Hollywood Mayor Pro-Tempore Lindsey Horvath told WEHO TIMES. “They need to go immediately and this moment is the right moment to call it out.”

Horvath was the only member from the West Hollywood City Council who showed up at the event.

The protest faced some opposition. A man who identified himself as Herim Uzziel, showed up at the protest with a red “Make America Great” hat. He had a camera hanging from his neck and a phone recording the protest while he yelled, “Four more years” into a bullhorn. Uzziel says identifies as a Latino American who grew up in Los Angeles.

Another man showed up wearing a MAGA hat. He stood in the sidelines and assessed the crowd before leaving the protest.

Equinox and Soul Cycle responded to the news and Mr. Ross’ support of Trump’s re-election by stating, “We wake up every day committed to our community, and creating a safe space where all are welcome. We believe in diversity, inclusion, and equality.” 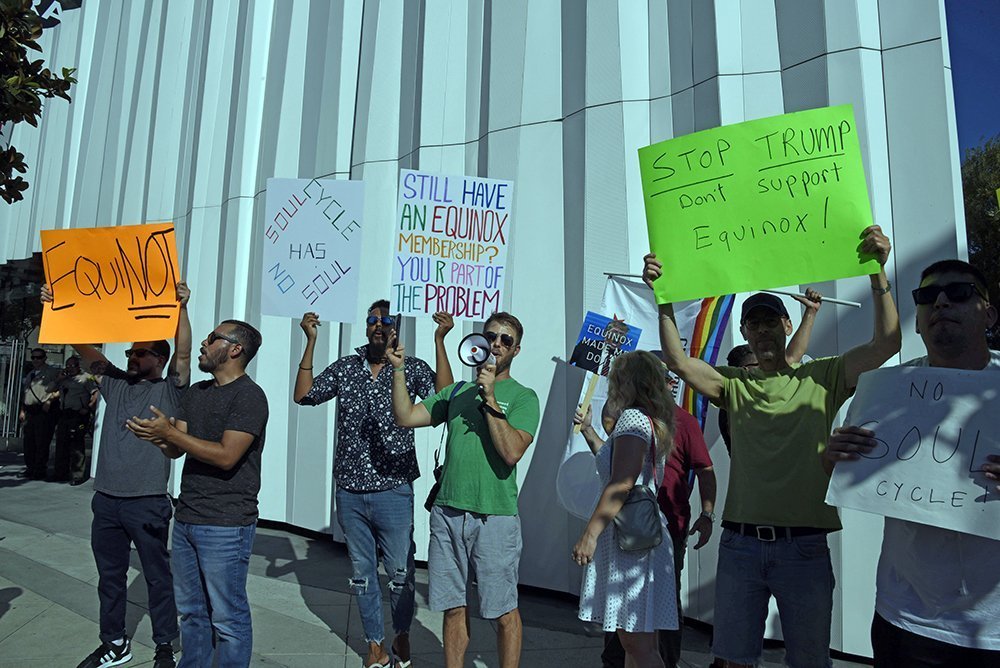 The organizers insist that Soul Cycle and Equinox cannot claim to be committed to the community and take membership dues from local folks, while then having those profits invested in the re-election of a President who is actively working to destroy the very people within the community. Their hope is to send a message to Mr. Ross, and current and future members of Equinox and Soul Cycle gyms that their inaction is passive approval of Trump’s divisive and harmful policies.