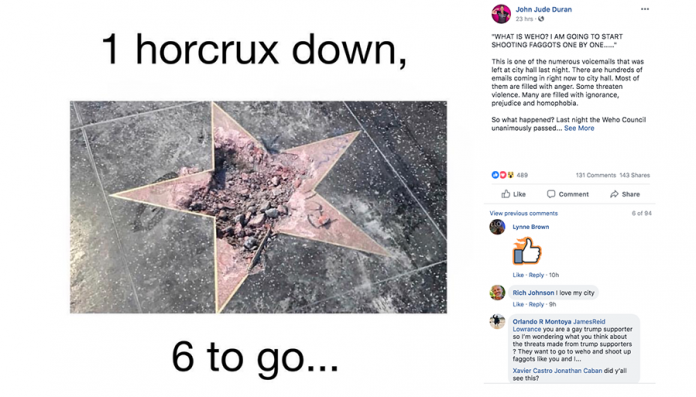 West Hollywood City unanimously passed a resolution calling on the Hollywood Chamber of Commerce to remove Donald Trump’s star from the Hollywood Walk of Fame at a regular city council meeting this past Monday. If Trump supporters did not respond well to the city of West Hollywood declaring May 23rd as Stormy Daniels Day, then the city’s request to remove Trump’s purchased vanity plate on Hollywood Boulevard pushed Trump’s hateful MAGA army over the edge.

According to West Hollywood Mayor John Duran, hundreds of angry voicemails have been left at City Hall following the city approved resolution–some making death threats or other forms of violence.

“‘WHAT IS WEHO? I AM GOING TO START SHOOTING FAG**TS ONE BY ONE……’ This is one of the numerous voicemails that was left at city hall last night,” Duran posted on his Facebook timeline. “There are hundreds of emails coming in right now to city hall. Most of them are filled with anger. Some threaten violence. Many are filled with ignorance, prejudice and homophobia.”

Human Services Commissioner for the City of West Hollywood and Founder of The Tweakers Project Jimmy Palmieri, also had some choice words for the Latina for Trump advocates on his Facebook account: 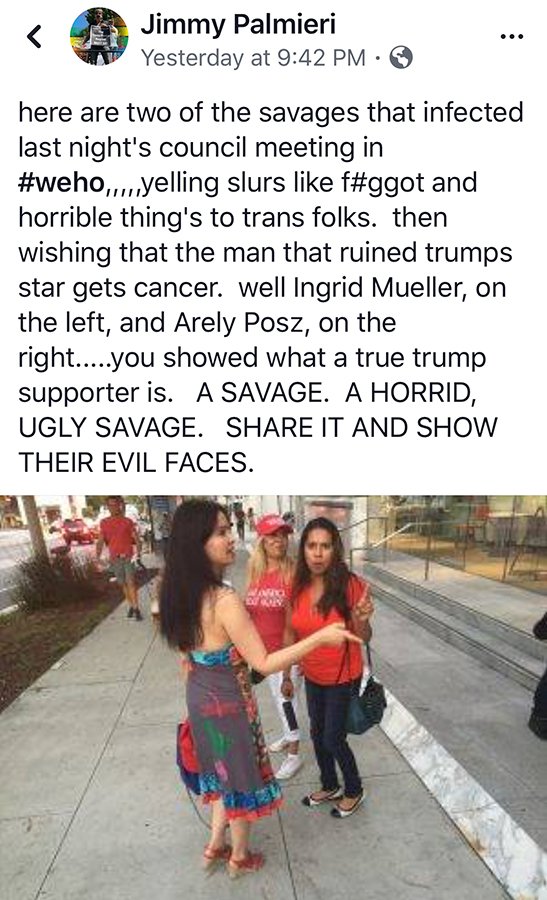 Duran did clarify that the city of West Hollywood has no authority over Hollywood Blvd. and that at most the resolution was a petition for them to take action, which they can heed or ignore.

“To the caller who threatened to come here and ‘shoot up faggots’ – WEHO is a small town with big city issues.” Duran added to his post. “For 100 years, West Hollywood has stood out as a place where all are welcome. We are non conforming, hedonistic, artistic, rebellious, unusual, colorful, outlandish, notorious, flamboyant, undefined, gender fluid, loving – and probably the closest thing to BOHEMIA in Southern California.

Like the performers at the Kit Kat Club in CABARET, we criticize the politics of the day through our music, art and theater. We color and shade the RESISTANCE with our energy. But we won’t sit back silently while right wing forces attempt to harm our community and our values.

Donald Trump is a monster. He is a thug. He was declared the winner of the 2016 election. He could have brought our nation together as a leader should. He could have asked us to raise ourselves up to a greater good for our common welfare and future. But he didn’t.

He acts like a child. He throws tantrums, tweets and pouts. He is cruel. He is divisive. He lies incessantly. Evidence is being released that shows that he and his family were working with a foreign nation against the interests of the United States for their own profit and gain. If the future continues down that path, he should be impeached and treated with disdain by all future generations of Americans as a modern Benedict Arnold.

So we DID call upon the Hollywood Chamber to remove his star. Not because he is a conservative or a Republican. Arnold Schwarzenegger, Ronald Reagan, Clint Eastwood are all conservative Republicans with stars on the Walk of Fame. No. His star should be removed because he is supposed to be the leader of the West. The Leader of the Free World. The Leader of the Nation that all nations would want to imitate. But he’s not. He has brought great shame upon our nation. The World no longer looks to us as the Keeper of peace and stability around the planet. We are now perceived as a threat. There is no Shining City on the Hill any more as Ronald Reagan described. And as the first Republican President warned: “A House Divided against itself cannot stand” – Abraham Lincoln.

To learn more about the city’s resolution to remove Donald Trump’s star from the Walk of Fame, visit: www.weho.org