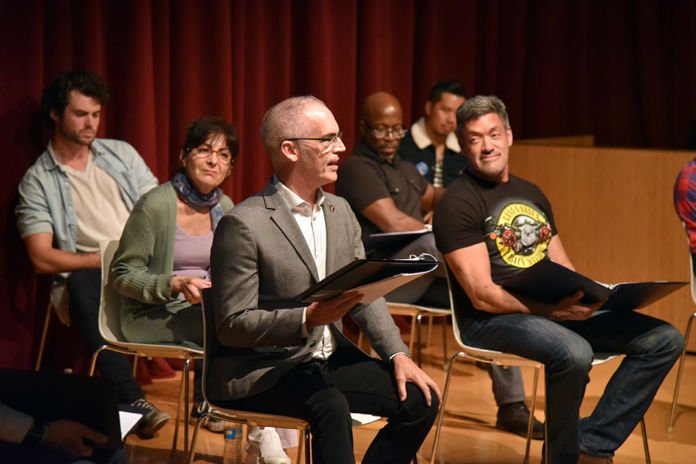 The staged reading of Patricia Loughrey’s “Dear Harvey,” officially kicked-off One City One Pride festival in the City of West Hollywood this evening at the West Hollywood City Chambers. The reading was organized and produced by the Celebration Theatre, the world’s oldest LGBTQ theatre. Mayor John Duran made some comments after the show. He asked members of the audience a show of hands of activists throughout the past decades and encouraged those who didn’t raise their hands to get active, and those who did to continue their participation in today’s resistance. The mayor also invited everyone to witness him give Stormy Daniels a key to the city tomorrow at 4pm at Chi Chi LaRue’s on Santa Monica Boulevard.

A reception of followed the staged reading with food catered from the Pink Taco located on Sunset Boulevard.

Dear Harvey by Patricia Loughrey, is an extensively researched and beautifully constructed, documentary-style ensemble play that recounts the life and lasting impact of groundbreaking LGBT activist and politician Harvey Milk, as told by the people who knew him best. Spoken word combines with multimedia and music as an ensemble cast moves in and out of the identities of real-world figures whose lives were forever altered by Milk’s too-short career. This spirited play reaffirms his impact and the continued relevance of his campaign towards equality, three decades after his assassination.

The next One City One Pride event will be Wednesday, May 30 from 7pm – 8:30 at West Hollywood City Council Chambers. The WeHo Reads program, and Lesbian Speaker Series will feature historian Lillian Faderman (Gay L.A., Odd Girls and Twilight Lovers: A History of Lesbian Life in Twentieth-Century America, The Gay Revolution: The Story of the Struggle) who will discuss and sign her new book Harvey Milk: His Lives and Death. Books will be available for sale by Book Soup. Visit here to register.

The City of West Hollywood’s One City One Pride LGBTQ Arts Festival takes place from May 22-June 30. For more info and to see a full list of events visit weho.org/pride or follow via social media @WeHoArts.