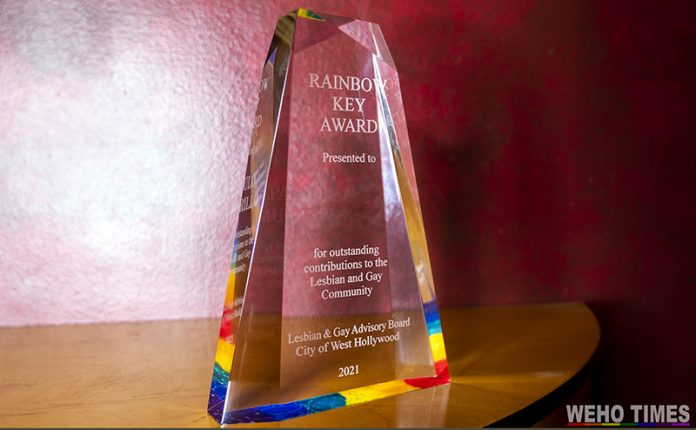 The City of West Hollywood is gathering nominations for its 2022 Rainbow Key Awards. Nomination forms are due by Monday, March 28, 2022. The awards presentations are scheduled to take place virtually in June 2022, which is known nationally as Pride Month.

The City’s 2022 Rainbow Key Awards will recognize people who have made outstanding contributions to the lesbian and gay community. Nominations may be submitted electronically through the City’s website at www.weho.org/rainbowkey.

Under policies adopted by the City Council and the Lesbian Gay Advisory Board (LGAB) in 2013, the Advisory Board makes recommendations to the City Council for Rainbow Key Awards, after seeking nominations from the community. Nomination forms ask about each nominee’s impact on the West Hollywood gay and lesbian community specifically, as well as, if applicable, the global gay and lesbian community.

Since 1993, the City of West Hollywood has presented Rainbow Key Awards to individuals and groups that have gone above and beyond in their service to the LGBTQ community. Contributions have come in many forms, including the arts, community service, humanitarian action, sports, medicine, armed services, leadership potential, benefit to the global gay and lesbian community, and more.

Past honorees have included activists, artists, civic leaders, educators, community organizations, and many others.