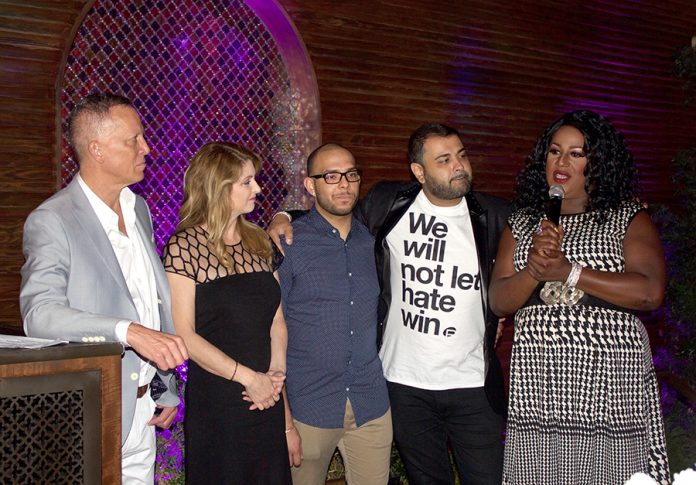 It’s been a year since the horrific Pulse Nightclub tragedy happened in Orlando, Florida. The mass shooting still stands as one of the deadliest terrorist attacks on American soil since 9/11.

Photos and text by Paulo Murillo

To honor the 49 lives that were lost, the 68 individuals that were injured, and those who survived the tragedy, David Cooley, the founder of the Abbey Food & Bar, hosted a fundraiser dinner and drag show to send some love to the East Coast from the West Coast. The fundraiser, held on Monday evening at The Chapel and The Abbey, helped raise over $25,000 in ticket sales alone. One hundred percent of the proceeds went towards OnePulse Foundation.

OnePulse Foundation is a nonprofit 501 (c)(3) that was established to create a sanctuary of hope. Funds will support the construction and maintenance of a memorial. Community grants will care for the survivors and the victims’ families, and scholarships will honor the 49 who were lost. There are also plans for a museum similar to the 9/11 and Oklahoma City bombing memorials that will showcase historic artifacts and stories from the event.

The evening began with a cocktail reception, followed by dinner at The Chapel. Special guests included OnePulse Foundation founder and Pulse Nightclub owner Barbara Poma, as well as the organization’s board members. Pulse survivors Neema Bahrami, Angelica Sanchez and Aldrin Astacio were there to share their stories and spread a message of love. Former NSYNC singer, actor, and OnePulse board member Lance Bass was also in attendance to support the cause.

“I’m here with OnePulse Orlando, a new organization that we’re very proud of,” Bass told WEHO TIMES. “I lived in Orlando for almost nine years. The tragedy that happened affected me deeply. I’m excited to support this organization so we don’t forget what has happened and what could happen.”

“A year ago today an act of hate happened in Orlando and we as a community came together. Not just the gay community, but the world,” Pulse Nightclub survivor Bahrami told those in attendance. “Today we are stronger. We are fighting for our rights and we’re stopping the hate. I thank you for joining our journey because it is important that we all stick together.” Bahrami then asked everyone to hug the person next to them and to say I love you. “Embrace the love,” he said. “Show each other that you love each other. Tomorrow is not promised.”

“Now check to see if your wallets are missing,” He added for comic relief.

“I was overwhelmed with the love and support of The Abbey, David, the staff, and the city of Los Angeles,” Bahrami later told WEHO TIMES. “We appreciate everything they have done for us and we’ll forever be grateful.”

Cooley went beyond what was expected of him to make sure everyone at the event felt welcomed. He stopped by every table and shook hands with all the guests. He even cleared tables and made sure everything was on point during the evening. Later in the evening Poma was smiling and dancing with some of the OnePulse board members. She told WEHO TIMES that this was the first time she allowed herself to dance at a club since the Pulse Nightclub tragedy.

A highlight of the evening was survivor and former Pulse Nightclub performer Angelica Sanchez taking the stage to perform. The dollar tips rained down. Her number ended with a message about staying grateful to be alive and to love one another. Cooley continued his fundraising efforts by announcing that he would match all donations made that night up to $10,000. He definitely gave his Orlando guests a night to remember.

Donations to the OnePulse Foundation can be made at onepulsefoundation.org/donate/