It was billed as a Dance for Black Lives demonstration with a large crowd gathering on the corner of Santa Monica Boulevard and San Vicente Boulevard in front of the West Hollywood Sheriff’s Station on Saturday, September 19. Organizers wanted to throw a street party while at the same time protesting the death of 29 year-old Dijon Kizzee, who was shot 19 times and killed by Sheriff’s deputies in South Central. Kizzee was stopped for riding his bicycle on the wrong side of the street without a helmet. Deputies allege that he pulled a gun on them.

Los Angeles Sheriff’s vehicles closed off access to Santa Monica Boulevard at Hancock Ave, San Vicente Boulevard and Robertson Boulevard, causing traffic jams on a Saturday night. The event began at 6:30pm with a moment of silence in recognition of the death of Supreme Court Justice Ruth Bader Ginsburg, who died the previous day. The majority of protestors wore masks, but those masks were either pulled down to their necks, or they were removed completely as the night wore on. They did not practice social distancing as everyone danced on the street.

West Hollywood Sheriff’s deputies were in full riot drag with what one protestor mockingly called a “barbwire slinky” separating them from the demonstrators who took breaks from dancing to shout profanities at the deputies. At one point a protestor shook the barb wire tauntingly and the deputies raised their rubber bullet guns at the crowd, forcing organizers to hold up a banner to further separate the protestors from the armed deputies. 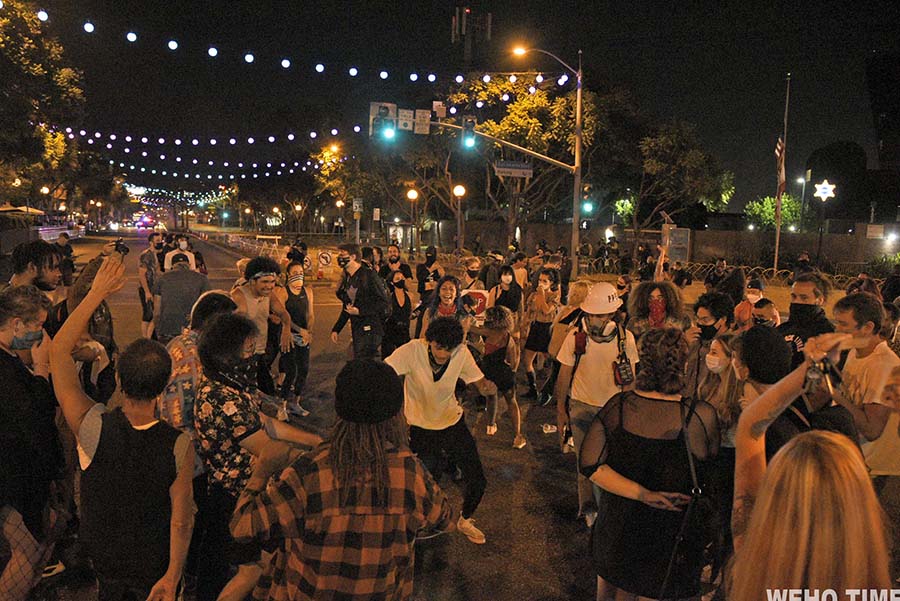 The music stopped at roughly 8:45pm and a woman said they were calling it and asked everyone to disperse peacefully out of fear for their safety. There were allegations that protestors were being “snatched and tagged” by deputies who were stopping participants on side streets and taking their pictures.

The crowd did not disperse. After a short moment the music began to play again and people continued dancing.

“The police don’t warn you. They start shooting and then ask question later,” A woman who identified herself as Mo, told WEHO TIMES. “I’ve been shot more than once. They do not give a warning. Sometimes if they’re polite they do, but often times they say that if we touch their barriers, that gives them the right to start shooting with all kinds of stuff like tear gas and rubber bullets. They hit a button and the sound that comes out makes your ears want to bleed, so if you get hit from four different things at once, you’re just going to get disoriented.”

A participant said organizers were granted a permit from 6:30pm to 11pm. One of the organizers said they did not need a permit, because it was their right to gather and protest.

“I’m pretty happy with the turnout, considering we planned this four days ago,” said one of the organizers who identified herself as Roxanne. “After everything that happened in South Central, this was a way for us to get grounded again and refocus why we are out here. We are in our constitutional right to assemble and speak our truth. You see we’re all just here for Black Lives, and for whatever reason, they feel they need to militarize against citizens in the middle of Santa Monica Boulevard. We’re still out here. We’re not intimidated. We just want to come out here and enjoy the beauty of life in an oppressive system. We also have a list of demands.”

Roxanne revealed that there were roughly 12 factions who organized the event, from Black Lives Matter, Black Unity, Black Future Project and Free Our Kids, to name a few.

“We chose West Hollywood because we’re not sure if this community is aware about what’s going on,” she said. “We also wondered if the police would come at us with their same approach in a more gentrified neighborhood. In South Central, houses were getting tear gassed and the people living there didn’t know what was going on. People just live there. It says a lot about how they treat their citizens in different communities.”

She also blames the Trump Administration for a lot of the friction between police and protestors.

“Our president is fear mongering people,” she added. “He’s in a position that has so many people’s lives at stake. He was chosen to protect the constitution and our rights. You have to be diplomatic regardless of how you feel. Trump supporters are becoming more violent. He definitely fear mongers. Meanwhile, we’re not asking for anything crazy. We just want our lives to matter.”

The Dance for Black Lives demonstration concluded with a drumming session. Speakers made speeches about their experiences with the Los Angeles Sheriff’s Department and they called out their list of demands.

The list of demands included an apology for the alleged murder of Dijon Kizze; an independent autopsy to the cause of his death; stricter qualifications for Sheriff’s deputies to get a badge, an investigation into Los Angeles County Sheriff Alex Villanueva; and finally, organizers demanded that all settlements paid to the families of victims come out of a Sheriff’s pension and not the people’s tax dollars.

The event ended peacefully at 10pm. Participants were encouraged to partner up as they walked to their cars to protect themselves from “being snatched” by police deputies. Many of the protestors made their way into Rocco’s restaurant and Fiesta Cantina which were open and serving outdoor dining.

I have not seen so many people shoot themselves in the foot other than at a trump rally. There is a fucking killer pandemic happening. NO BIG CROWDS, WEAR MASKS and use your brains. This doesn’t show intelligence or activism. It shows that you don’t care for your own health or the health of others.

clearly black lives do not matter if you are willing to put black lives at risk by encouraging black people to not wear a mask. They don’t matter enough to protect them from the virus. wear a fucking mask!