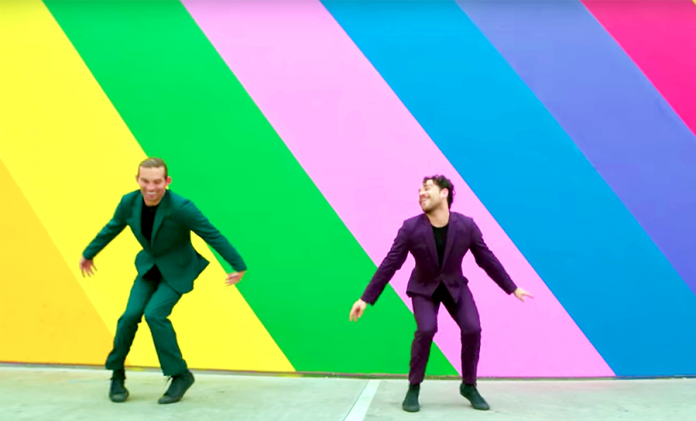 DanceOn teamed up with Instagram and the Paul Smith designer store in West Hollywood to shoot a music video at the world famous Paul Smith Pink Wall that was turned into Rainbow Mural to pay tribute to Pride Month 2017.

The DanceOn video will immortalize the rainbow moment as the Rainbow Mural is expected to go back to pink soon. It stars dancers Derek Tabada and Will Johnston dancing to the tune of singer-songwriter Dylan Hyde’s “Clearly.” The project theme is all about universal love connections through Instagram, through artistic expression, and through public shared experiences. It doesn’t hurt if you break into a song and dance while sporting a jewel-toned Paul Smith suit.

Johnston (guy in with the long locks) also choreographed the queer-inclusive video LGBTQA Alphabet, produced by Equinox in collaboration with the LGBT Community Center, which was also released for Pride Month in early June. The video is debuting just in time for New York and San Francisco Pride.

Some familiar faces can be spotted at the end of the video like Canadian indie pop singing duo Tegan and Sara, as well as WeHo’s very own Ivy Bottini with Dan Morin.

The Paul Smith Pink Wall on Melrose Avenue in West Hollywood has made a name for itself as one of the most photographed and tagged locations on Instagram. Paul Smith’s wall will only remain rainbow from June 1 – June 30th, the duration of Pride Month.

DanceOn’s intention is to raise awareness for our LGBT community and to create a global activation throughout pride month.