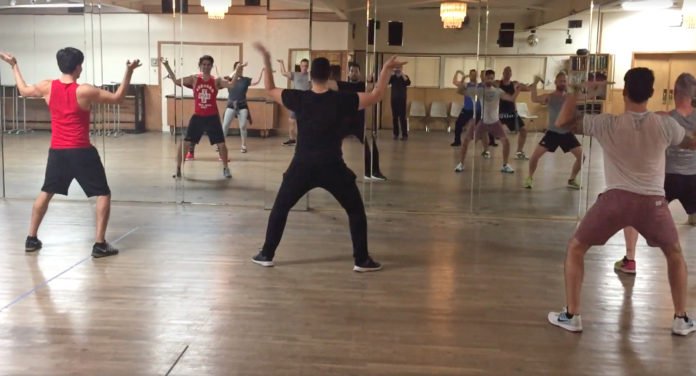 You better WERQUE! Renown choreographer and dance instructor Luis Camacho (he taught Madonna how to vogue) is teaching WERQUE dance classes at an intimate setting in Hollywood. People now have a chance to learn some of the dance moves that catapulted the Queen of Pop to super stardom during her Vogue music video, The Blond Ambition Tour/Truth or Dare Documentary.

For those living under a proverbial rock, Camacho made a name for himself in the New York City ballroom scene where he won several trophies at vogue balls in the mid-to-late 80s. The School of Performing Arts alumnus toured Japan where he showcased his dance moves at various clubs throughout the country as a member of the legendary House of Xtravaganza. He was in the pulse of dance, music, visual arts, nightlife, fashion, and community activism way before he caught the eye of superstar Madonna. Camacho was first introduced to the world when he gave good face in Madonna’s official video to support her smash hit song “Vogue.” His talent landed him a lead dancing position in the Blond Ambition Tour, which played at large arenas throughout North America, Europe and Asia. He played a hand in Music Television history when he choreographed and danced in Madonna’s now infamous Marie Antoinette Vogue number for the 1990 MTV Video Awards. That same year, Luis Camacho and fellow House of Xtravanza dancer Jose Gutierez were both recognized for their work in the Vogue video when they were nominated for a 1990 MTV Video Music Award for Best Choreography. His name and face would also gain further international recognition when he was featured in the documentary Truth or Dare, which gave a behind-the-scenes look at the Blond Ambition Tour.

Camacho was back on the big screen in 2016 when he re-united with the dancers of Truth or Dare for the critically acclaimed documentary “Strike a Pose.” The documentary revealed the truth about life during the tour and followed up with the dancers 25 years later. It is a dramatic tale about overcoming shame and finding the courage to be who you are.

Camacho’s main passion continues to be dance. For the past ten years, he has used his talents to give back to the community. He has either produced, choreographed or performed in a long list of charity events, and he contributes top-notch entertainment for several fundraising shows.

Luis Camacho’s new “Werque” Dance Fitness class brings his own flavor by fusing hip-hop jazz and vogue. The goal is to create a sense of liberation and excitement in a dance class setting while working up a sweat and getting a workout. Werque is a class for all ages and all dance levels. Camacho hopes his class will give people some self-confidence, and a little flair. He wants people to let their hair down, have some fun and feel fierce.

There are three WERQUE classes scheduled for the month of December at the Hollywood Dance Center, located at 817 N. Highland Ave, in Los Angeles. The first class had a soft opening on December 3. The second class is scheduled for December 10 at 5pm, and the third class is happening December 17. The entry fee to Werque is $15 per person.