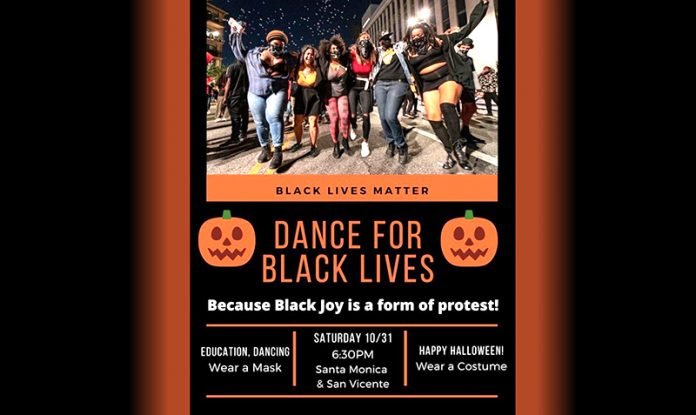 The Halloween Carnaval in West Hollywood may be cancelled, but a Dance for Black Lives Matter “protest” is returning to the city of WeHo on the corner of Santa Monica Boulevard and San Vicente Boulevard on Halloween night, Saturday, October 31, 2020, starting at 6:30pm.

A flyer is circulating around social media reads that this is a dancing protest of sorts. The event is very similar to the dancing demonstration that took place on Saturday, September 19th in front of the West Hollywood Sheriff’s Station.

“We’re headed back to WeHo,” reads a Dance for Black Lives Matter Instagram post. “Not only does WeHo hold one of the biggest Halloween parties in the U.S. every year (it’s cancelled this year) but we also have some history with this city. See you on Halloween!”

Another Instagram post reads that there will be libations, speakers, demands, dancing and more. Halloween costumes encouraged. The flyer also tells participants to wear a mask.

An email sent by Genevieve Morrill, President and CEO of the West Hollywood Chamber of Commerce addressed the many concerns business owners may have about the potential for civil unrest, leading up to, and on election day.

“Please be assured that our West Hollywood Sheriffs and Public Safety teams are working round the clock to ensure our safety,” she stated. “While we cannot predict what may or may not occur, we have been advised that additional resources have been secured and strategies are in place to deal with any situations that may arise.”

Morril also let the business community know about the Dancing for Black Lives Matter protest Halloween night. “Tomorrow at approximately 6:30 pm, there is a planned BLM march/dance to take place on Santa Monica Blvd,” she added. “We are uncertain of the end time but may go as late as 11pm. At this time we do not have any intel that there is anything planned in our City for November 3rd election day. If you observe something of concern, please contact the Sheriff’s Station at 310-855-8850.”

Despite the planned Dance for Black Lives Matter protest scheduled on Halloween night, which is bound to attract large crowds, West Hollywood Mayor Lindsay Horvath, used her social media platform to remind the community that the West Hollywood Carnaval is cancelled this year because it is just not safe for crowds to gather during the COVID-19 pandemic.

“LA County Public Health is still telling us that public gatherings of more than ten people are not allowed. Everyone must still keeping their distance. Must be wearing masks, washing your hands and doing all the things we know we need to do to make sure we’re not spreading coronavirus in our community.”

She added that the city will not close the boulevard for pedestrian access this year. She also reminded community members that business are operating at capacity and the city can’t have lines cuing down the street. She also added that code compliance teams will be out that night with public safety personnel to make sure everyone is safe to make sure Halloween in West Hollywood does not become a super spreader event.

The last Dance for Black Lives Matter that took place on September 19th was relatively peaceful in comparison to the Justice for Breonna Taylor protest that took place in West Hollywood on Friday, September 25th. The latter protest ended with arrests and violent clashes between the Los Angeles County Sheriff’s Department and protestors on Sunset Boulevard.

LOL. We laughed for days with these fools and the idiots in City Hall that permit such foolery. These theater burn outs have co-opted the movement and its meaning. First one of the BLM founders, cashes in with Warner Bros with a multi million dollar deal to crate Oprah style self help content and now these black fools dance in the street.

This is bullshit. This is not a protest. It’s a dance. This doesn’t help the blm cause. It hurts the movement. It says that no one involved cares about their own lives during a pandemic. The city has banned these types of gatherings. THE CITY SHOULD NOT ALLOW THIS. I DON’T GIVE A FUCK WHAT COLOR YOU ARE…..THERE IS A DEADLY VIRUS….STAY THE FUCK HOME.