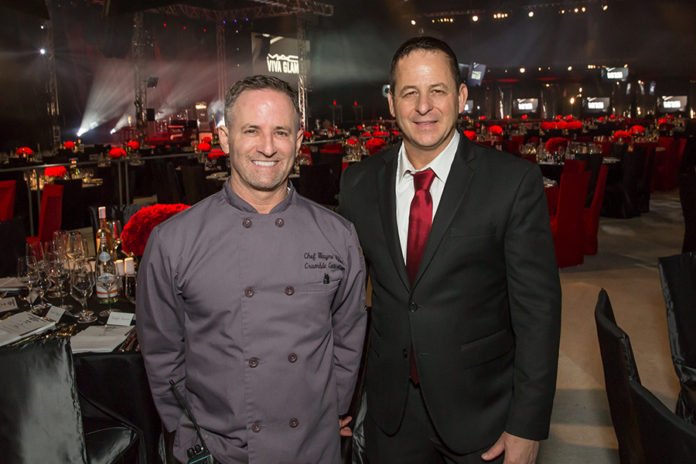 Crumble Catering-the official caterers for the Elton John AIDS Foundation Viewing Party for the 15th year-once again delivered over 1,000 five-course meals to some of Hollywood’s biggest A-listers in a massive undertaking seamlessly executed by some of the top Chefs in the industry for the 90th Academy Awards telecast.

A Labor of Love with Chef Wayne Elias and Chef Joan Roca of El Celler de Can Roca
raised $5.9 million for the global effort to end AIDS.

West Hollywood Park was transformed into a city within a city, with a sprawling array of custom-built pavilions featuring sparkling décor, state of the art lighting, projection, and displays. It took an army of 150 servers and bartenders and 70 kitchen staff to make for a flawless evening. This year, thanks to BBVA Compass, Crumble and Chef Wayne Elias teamed up with Chef Joan Roca of El Celler de Can Roca, a Michelin three-star restaurant located in the medieval city of Girona in Catalunya in Northern Spain. The talented Chef and his brothers Jordi and Josep Roca are masters in their respective art of cuisine with Joan handling primary Chef duties, Jordi as patissier, and Josep as sommelier. Their food is complex, incorporating cutting-edge techniques and multiple ingredients to create highly stylized plates. Their dishes are designed to evoke memories, emotions and the landscape of their hometown in Northern Spain.
When it comes to creating mouth-watering and inspiring cuisine, Chef Wayne and his business partner of 27 years Chris Diamond, co-owners of Crumble Catering and the Los Feliz restaurant Rockwell: Table & Stage, are veterans in the field. Diamond commented, “Our 15th year working with the Elton John AIDS Foundation was a huge success and an absolute dream come true!” Served this year was a sumptuous five-course dinner with a plethora of big screens broadcasting the live Oscar telecast. Food included; Arugla Salad with Comté Cheese, Pickled Onions and Curry-Coated Walnuts. Main courses included Sea Bream with a Chardonnay Sauce and Lemon, Truffle and Hazelnut Gnocchi; and Filet Migon with Red Wine, Olive Oil Mashed Potatoes, and Farmers Market Vegetable Puff Pastry. Also, there was a Vegan option that included a Cannelloni and Consommé Soup that was French service style at the tables. Along with a wide array of sweet & sumptuous desserts, Chef Wayne also served a 15-year favorite, his Grilled Raisin Bread with Mascarpone, Gorgonzola Cheese and Asian Pears. For Chef Wayne, being such an integral part of this event is always an honor, remarking, “It’s a true test of nerve and skill having to prepare such a large amount of courses for some of the most recognizable people in the world. It takes a village and I am proud to once again serve alongside my hard-working team.”

From its humble beginnings in 1992, the Elton John AIDS Foundation has raised more than $400 million over the past two decades to challenge discrimination against people affected by the epidemic, prevent infections, provide treatment and services, and motivate governments to end AIDS.

Over the years, Crumble Catering has catered hundreds of A-list events from Harry Potter to Criminal Minds Beyond Borders, to Creed, Live By Night; along with cast and crew screenings for Argo, Coat of Many Colors, and Cloud Atlas. Most recently Crumble Catering has provided services to major events and premieres for Blade Runner 2049, CHiPs, Jumanji, Paddington 2, Spider-Man Homecoming, Steven Tyler Grammy Viewing Party for Janie’s Fund, John Varvatos, Maxfields and more! Whether it’s an elegant dinner for 10, or a major corporate party for 5,000, Crumble Catering can make it effortless and fun. For more information, visit: CrumbleCatering.com