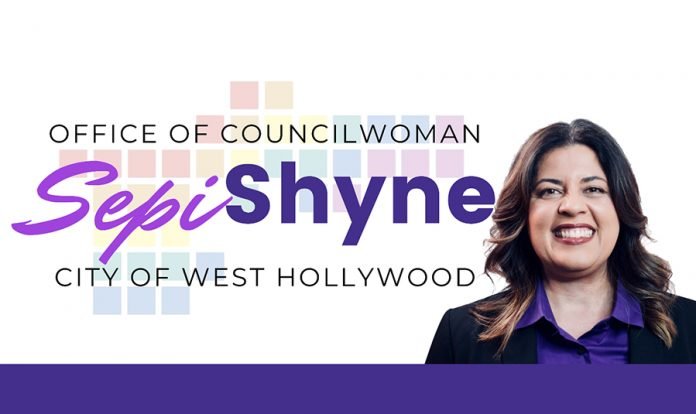 The office of Councilwoman Sepi Shyne released her first 120 days statement in office where she states that she has fulfilled half of her campaign platform pledges.

Since her commanding and historic election victory in November 2020, Councilwoman Sepi Shyne has successfully implemented 50% of her campaign promises, better known as her “Community Shyne Plan”. Released during the campaign, Councilwoman Shyne pledged to focus on six pillars; Supporting Small Businesses & Workforce Development, Combatting Homelessness & Creating Affordable Housing for All, Social Justice & Representation for All, Traffic & Infrastructure, A Healthy Environment, and Protecting our Most Vulnerable Communities.

Her early accomplishments include the creation of $250,000 in grants for West Hollywood Small Businesses and a Business Recovery Task Force to develop an economic blueprint for recovery, the creation of a Social Justice Task Force composed of Black, Indeginous, and other People of Color (BIPOC) to help the city dismantle systemic racism, asked staff to develop a process of achieving Net Zero at city facilities, strengthened the tenant harassment policy to further protect renters, protected vulnerable communities by sponsoring human trafficking community training, supported the Vision Zero Roadmap to reduce pedestrian fatalities, and appointed the most diverse group of community leaders in the City’s history with 68% of her direct appointments who are self-identified women, 47% who are part of the BIPOC community, and 52% who are members of our LGBT community.

“We campaigned on a detailed vision that put the residents of West Hollywood first and ensured they had a future they could believe in,” said Shyne. “I am so excited to have accomplished so much in such a short amount of time. My colleagues continue to be supportive of our initiatives, and I am ready to complete and expand our efforts even further than we imagined.” she continued.

The West Hollywood City Council meets every 1st and 3rd Monday of the month at 6:00 PM. Meetings can be accessed through weho.org/city-government/city-council/council-agendas or can be streamed live on the City of West Hollywood’s Youtube page.

For all her talk of inclusion, Sepi’s REAL legacy on the streets is the “Shyne Fine”— the $250 no warning citation for mask non compliance selectively administered targeting homeless people and other ‘undesirables’.

Many of the homeless young men of color I do outreach with have said that the “Shyne Fine” only targets them. Are you truly dismantling or contributing to “systemic racism”, Sepi?