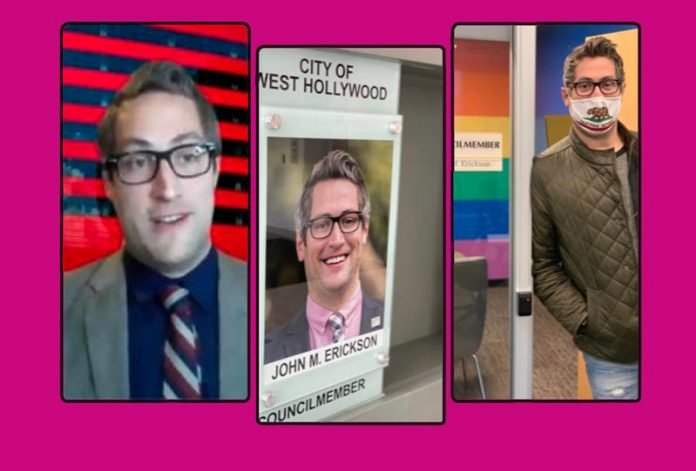 WeHo Council member John Erickson looks back to one year since he took the Oath of Office to the West Hollywood City Council via social media posts:

“It’s has been one year since I took the Oath of Office to be your City Councilmember – and every single day I am moved to action by the impactful stories and realities of the people that make #WestHollywood home.

🔸Making our OutZones for our businesses permanent.

🔸Bringing back better micro-mobility options for our residents 🛴.

🔸Focusing on our Eastside needs of the city

Serving as your Councilmember this past year has been the greatest honor and responsibility of my life. This past year has shown me the power of our community – we are stronger than ever and together, we’re unstoppable and we’re just getting started.”

Councilmember John Erickson was elected to the West Hollywood City Council on November 3, 2020 with the commitment to uphold the city’s founding vision for a forward-thinking, diverse, and tolerant community.

Architects of medical apartheid. It’s time to file criminal charges against this flaming trash fire and his brothel of establishment whores.

Is this a joke? I think if he’d speak to ANY of his constituents he’d hear that what we care about is the crime and the homeless situation. Also, how about not turning the entire place into a dispensaries but I am so happy bike lanes are sorted.

He (and Shyne) hasn’t listened since his butt got into that seat. I can’t wait to vote them out.

How about let the public reflect. You are one of the worst things that’s happened to the city in our very short history. I made a huge mistake in voting for you I cannot wait for the day when I vote for somebody to take your seat.

And crime and violence in West Hollywood is out of control while our homeless population has spiraled to new heights. It’s unsafe to walk that Weho streets at night. The West Hollywood Park is still not complete. Council meetings are virtual and closed to citizen attendance under the guise of Covid Protections all the while Erickson and the council dance maskless at the Abbey. Neighborhoods are littered with scooters and West Hollywood is a disaster. Stop the self congratulations Erickson. You’ve accomplished nothing to be proud about.