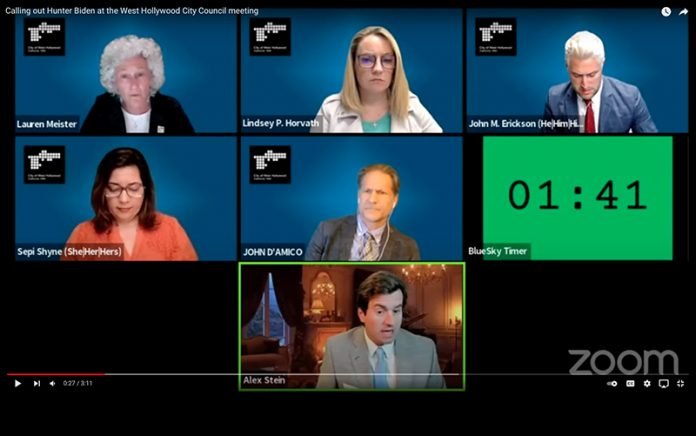 It was an awkward moment during public comment at last week’s regular West Hollywood council meeting, when a man spun a crazy tale surrounding an alleged art show in West Hollywood, children, Hunter Biden, crystal meth use, a Carl’s Jr spicy chicken sandwich, and how the COVID-19 vaccine made him impotent. But it turns out the man was only pretending to be suffering from some sort of psychosis. He is self-proclaimed king of conspiracy, Alex Stein, who hosts a podcast called Conspiracy Castle, which carefully labels itself as parody, comedy, and improv.

Stein alleged he attended an art show at Milk Studios “in West Hollywood” where he met Hunter Biden in a room-full of children. He said he and Hunter Biden became instant friends and the series of events that followed hits all the rightwing talking points: Hunter Biden; children; meth; needless; spoon; Joe Biden; laptop; Ukraine; vaccine booster; impotence; and Tucker Carlson. “What Hunter Biden did with that Uber driver and that spicy chicken sandwich was disgusting,” he said.

The looks on the faces of WeHo City council went from confused, disturbed, concerned, to tight-lipped smiles, to annoyed, in two minutes.

“I want people to see my video and not know whether or not it’s real,” Alex Stein told The Jewish Journal in a profile piece last month. “Questioning is almost as good as laughter. People need to ask questions.”

“Excuse me Mayor,” council member John D’Amico chimed in after Stein’s two minutes were up. “I think it’s important to note that Milk Studios is in the City of Los Angeles…”

Stein was proud of his moment before the West Hollywood City Council. He posted his public comment in his YouTube channel which has had 17.7K views as of the posting of this piece with 202 comments, mostly praising his trolling skills.

This is an audition tape. Tucker Carlson began his career like this. Remember him dressing like a 6 year old boy with that stupid bowtie? He seemed so harmless back then

Hey paulo do you suspect this skit is a misdirection from the open secrets about John heilman’s sex tourism in Prague, among other long term allegations that remain unanswered?

No. I suspect this is yet another looney-toony anti-vaxxer spreading lies about the COVID-19 vaccine.

He’s a self proclaimed GOP operative. I guess you do your own fact checking too

says the guy schleping John Duran. clean your own glass house before you go around throwing stones

Federal Prosecutors revealed evidence during last summers trial suggesting Duran could have aided Ed Buck’s disposing of evidence the night he murder Timothy Dean. Even this site reported the call logs.
But I won’t fault an anonymous commenter for being nearly a year behind on my sex life

So this d-bag goes onto a city council meeting where they legally have to give him his two minutes of fame and are not allowed to interrupt or comment due to the rules of the Brown Act (except to point out that the location wasn’t in town afterwards) and that’s his “comedy?” Well, I guess when your talent-free a$$ can’t get an actual booking anywhere real you to what you have to to be seen, Maybe next time film a fake meltdown at Papa John’s over them selling the Hillary pedo pizza combo. That should be hilarious!