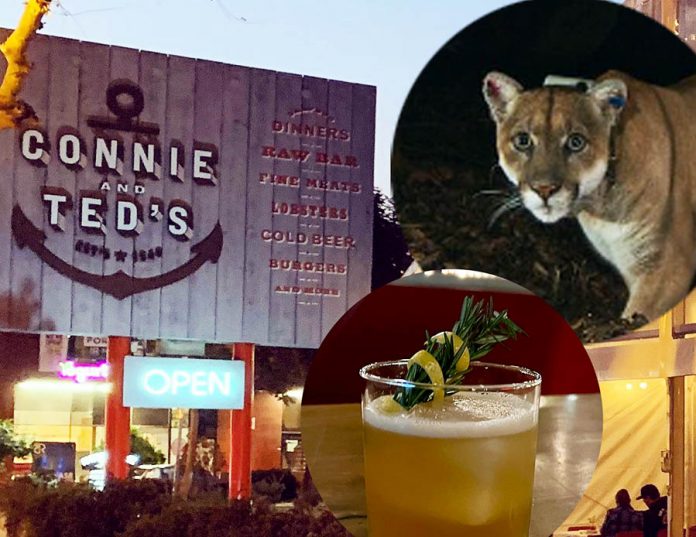 Connie & Ted’s Seafood Restaurant, located at 8171 Santa Monica Blvd, offers a P-22 cocktail in memory of to the late and beloved wild mountain lion who resided in Griffith Park. The restaurant is donating $1.00 from each drink sold to The Wallis Annenberg Wildlife Crossing, a public-private project that aims to protect and restore wildlife habitats in Southern California. The 101 Freeway crossing is currently in construction and is expected to be finished in 2025.

P-22 was the subject of significant media attention, including numerous books, television programs and other works of art. P-22, P being short for “puma” and 22 referring to him being the 22nd puma in the ongoing puma study, was often recorded prowling in the Hollywood Hills neighborhood of Los Angeles. He was monitored by a radio collar and remained in Griffith Park for ten years until he was captured then euthanized on December 17, 2022, after suffering traumatic injuries consistent with being hit by a car in combination with several longer-term health issues.

The Wallis Annenberg Wildlife Crossing was conceived in 2015 when the National Wildlife Foundation (NWF) and Caltrans proposed a massive corridor across the 101 freeway in Agoura Hills to provide wildlife with a safe place to cross into other habitats. At the time, the proposed plan was expected to take years to fund and even longer to build. Due to the bridge’s size and cost, its completion would be reliant on donations from the public.

In 2016, Wallis Annenberg and the Annenberg Foundation took up the call for funds and made a $1 million challenge grant to spur the community and local leaders to donate. The grant provided the necessary test assessments by Caltrans to ensure that the bridge would not cause any environmental impact to the surrounding area.

Thanks to the Annenberg Foundation’s challenge grant, the project received donations from more than 3,000 private, philanthropic, and corporate institutions around the world and helped NWF raise enough money to begin construction – initially in the year 2025.

In 2021, Wallis Annenberg and The Annenberg Foundation accelerated donations with a record breaking $25 million challenge grant to the NWF. The ‘Conservation Challenge Grant’ – currently the largest of its kind – serves as a call to philanthropists to help protect a threatened global biodiversity hotspot in Los Angeles. The funds raised were not only enough to fund construction,but moved up the construction timeline to April 22, 2022 – three years earlier than planned.

Construction is now on its way and when built, the Wallis Annenberg Wildlife Crossing will be the largest wildlife corridor in the world and will restore habitats and an ecosystem that over time has been degraded by human development. The bridge will allow for wildlife to cross freely over the 101 freeway without the threat of death or accidents,and will ensure the survival of many isolated species.