A photo posted on the Gay Vintage Los Angeles for Men Facebook group confirms what we reported earlier today. Lance Bass, of NSYNC boyband fame, who is also part owner to Rocco’s WeHo, signed a lease and he has been handed the keys to the former Rage Nightclub space located at 8911 Santa Monica Boulevard.

The photo shows Lance and a business partner posing with landlords Monte Overstreet and his husband John Cole.

“West Hollywood is reborn!!!” Reads a caption posted by Andrew Scott, a friend of Overstreet’s. “Monte Overstreet and husband John Cole have successfully handed over the keys to the iconic Rage Nightclub to the new owners Lance Bass and company. Now with Gym Bar planned for next door and other future businesses forthcoming, these new venues will revolutionize the gay nightlife in the heart of West Hollywood. Monte and John have been ferociously diligent in securing the perfect businesses to secure the spaces left vacant from the covid pandemic and to escalate a revival of WeHo for future generations. Despite what naysayers have said, Monte and John are once again proving to be visionaries in the evolution of gay culture in West Hollywood.”

The buzz began yesterday when club promoter Paul Nicholls and others involved in the project blasted their social media accounts with posts about the “Biggest gay club in the USA” coming to the city of West Hollywood. The website links to wehomegaclub.com where people can sign up to get the latest updates. 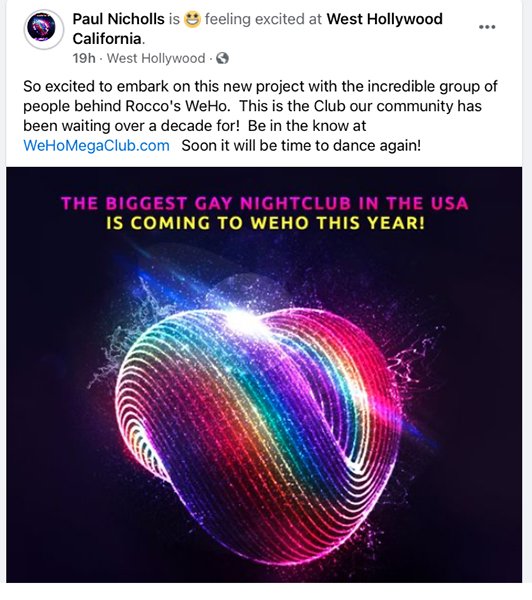 There have been numerous rumors surrounding the empty Rage Nightclub space on 8911 Santa Monica Boulevard since the legendary gay dance club closed permanently back in September of last year after being open for 37 years. The photo of Lance Bass posing with Monte Overstreet puts some of these rumors to rest.

When that old hag Monte finally dies, no one will mourn him. Good riddance!

I’d like to know more details about how Monte Overstreet shut down so many properties during Covid protections, including Oilcan Harry’s. I’ll hold my judgement until I know more, but it stinks like skunk.

This will be great.

The only thing Monte and John envision is the amount of cash the lease agreement will bring in.

Despite what naysayers have said, Monte and John are once again proving to be visionaries in the evolution of gay culture in West Hollywood.

Sayers said nay to the closing of the Goldcoast, Oilcan Harrys, Rage and Gym Bar during the pandemic all under Monte’s watch. Andrew has his head so far up Monte’s wrinkled nether region he’s become delusional. Visionaries in the evolotion of gay culture? NAY!

Monte is a cruel old crone whose vile nasty greed is singlehandedly responsible for the closures of numerous places. He has no soul and did irreplaceable harm to innocent people suffering during a pandemic! Hope he drops soon. That being said, Good luck to Lance!