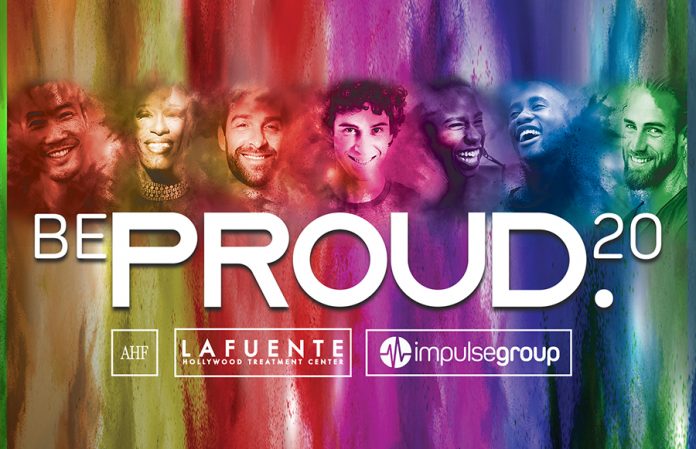 AIDS Healthcare Foundation (AHF), Impulse Los Angeles and La Fuente Hollywood Treatment Center are kicking off this year’s Pride Month with BE PROUD 20–a double decker bus experience that’s streaming on Facebook Live on Sunday, May 31, 2020 (face coverings and social distancing guidelines will be followed with six-foot-spaced demarcations placed on both levels of the bus in adherence with LA County and Los Angeles Public of Health orders).

The month of June is LGBT Pride Month to commemorate the Stonewall riots, which occurred at the end of June 1969. Many pride events are normally held during this month to recognize the impact LGBT people have had in the world. However, the COVID-19 pandemic has impacted the way we celebrate Pride this year. Many pride events have either been postponed, or canceled across the country and around the world.

“June has always been a time for celebration for the LGBT community and an opportunity for us to be visible in a way that we aren’t throughout the year,” LA Fuente Hollywood Treatment Center Founder and CEO Manny Rodriguez, told WEHO TIMES. “With COVID and so much darkness, I wanted to do something that could bring joy to our community that feels safe and would be within the guidelines of what we’re being told to do. I wanted to partner with people who felt the same way and give back to the community.”

Impulse Los Angeles–the founding chapter of the international group dedicated to promoting healthier sexual lifestyles among gay men, the Los Angeles-based AIDS Healthcare Foundation (AHF)–a global nonprofit organization providing cutting-edge medicine and advocacy to over 1,000,000 people in 43 countries, and La Fuente Hollywood Treatment Center–the nation’s leading LGBTQ addiction treatment center, are hopping on a double-decker bus and spreading joy with the help of community partners, allies and some colorful friends. There will be live entertainment and the bus will make some pit stops to drop off generous donations to non-profit organizations.

“With COVID putting pride at a halt, we felt we needed to have something while taking responsibilities with all the restrictions, but still show some kind of celebration,” said organizer and Founder of Impulse Los Angeles, Jose Ramos. “There is so much negativity going on right now and having a little fun while supporting the community is one of the things that we wanted to do. We really wanted to support our community partners who do a lot of work all year long.”

Ramos says they chose to make a monetary donation to The Van Ness Recovery House because of the work they do with the LGBTQ community around substance abuse. The nonprofit Being Alive, located in West Hollywood, will be getting a check during BE PROUD 20 for the work they do as well.

“We wanted to drive around the city and show that Pride is coming,” Ramos added. “We’re still here. We can still be proud as part of the LGBTQIA community. Hopefully it will give people a little sense of pride and remind people to be proud regardless of COVID. We can be proud in our own way and still be safe.”

BE PROUD 20 kicks off on a colorful double-decker bus leaving Los Angeles City Hall in Downtown Los Angeles. It will travel through Echo Park, Silverlake, Hollywood and end in West Hollywood outside of Rocco’s by the rainbow crosswalks. The BE PROUD 20 bus will be hosted by festive representatives from each organization, City Officials, community stakeholders and some of Los Angeles’s most fabulous drag performance artists.

The BE PROUD 20 will broadcast live on Facebook at 12pm for the kick off, approximately at 12:45 and again at 2pm.