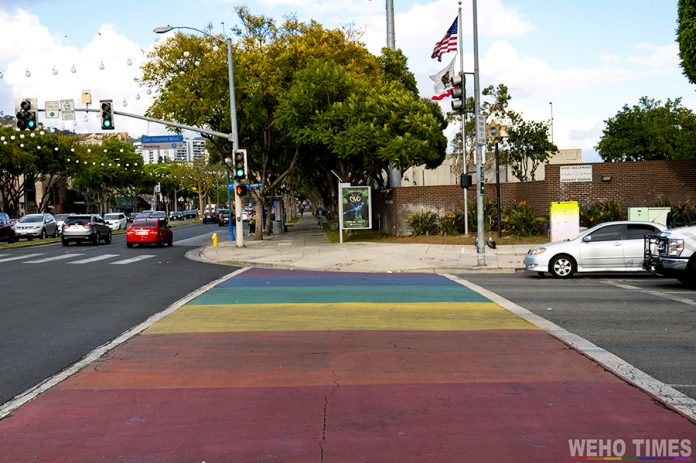 West Hollywood’s Rainbow Crosswalk lives to slay another day. The rainbow colors were scheduled to be removed this past Tuesday night, to make way for the new, more inclusive Pride Progress Flag Crosswalks within the intersection of San Vicente and Santa Monica Boulevards, on both the north and south approaches. However, cold windy weather stalled the removal of the Rainbow crosswalk and will inevitably delay the installation of the updated version approved by West Hollywood City Council, which was scheduled to begin March 1, 2022, and be completed March 3, 2022.

The removal of the rainbow crosswalk and the installment of the new approved colors will take place in two phases. The updated schedule, weather permitting (this is tentative – if it remains cold or if there’s precipitation, this schedule will be updated again) is as follows:

On July 7, 2021, the TAB recommended that the crosswalk at the San Vicente/Santa Monica intersection, be painted with the Pride Progress Flag. The TAB did not recommend having a specific Transgender Flag Crosswalk, instead the Board recommended adding the Transgender Flag colors to the existing rainbow flag crosswalk, via use of the Pride Progress Flag colors.

The first Rainbow flag crosswalk was installed on June 7, 2012, during Pride Month. The colors were painted over the brick crosswalk which garnered the name the Rainbow Brick Road by some local residents.

The permanent Rainbow Crosswalk we see today was not installed until November 1, 2012, for the south crosswalk and November 2nd for the north crosswalk.

This story will be updated if dates change for installment of the new Pride Progress Flag Crosswalks.

The rainbow colors have a special meaning. They are a part of out LGBT history. At one point this rainbow crosswalk was progress. Sad to see it go.

who cares. it’s painted colors on a street.

and it’s not “progress” when you call out specific races in the flag..that’s fracturing unity which the rainbow colors were meant to signify – all colors under the rainbow. #notmyflag

Duh. It just divides people up more and more. Thanks to braino deado Weepy Hauntedwood.

Who cares? You do. You care enough to post that you don’t. dumb.