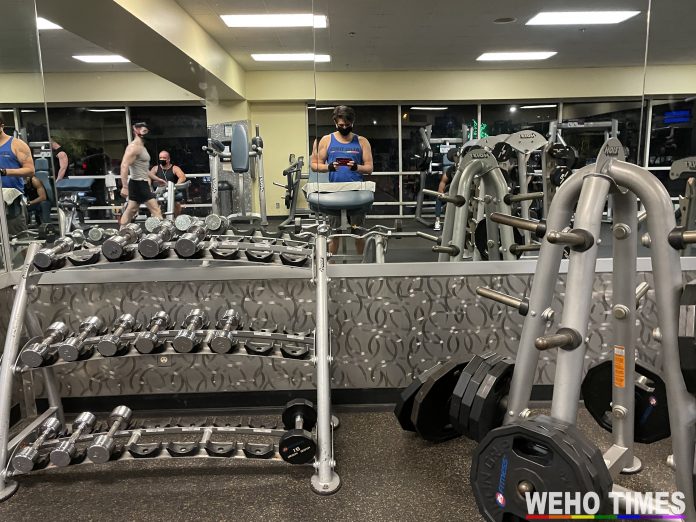 The WeHo 24-Hour Fitness gym has left the building in the City of West Hollywood. The gym officially closed on Tuesday, November 30, 2021 at exactly 9:00 p.m. Some community members don’t give a shit, but many Wehoans woke up to a different West Hollywood this morning. There is a feeling of loss as they face the day without their workout routine at their local and affordable WeHo gym.

There is also the loss of foot traffic for local businesses. Whether getting a cup of coffee, a protein shake, or grabbing some last minute groceries, the closure of that gym is bound to impact revenue in that area. 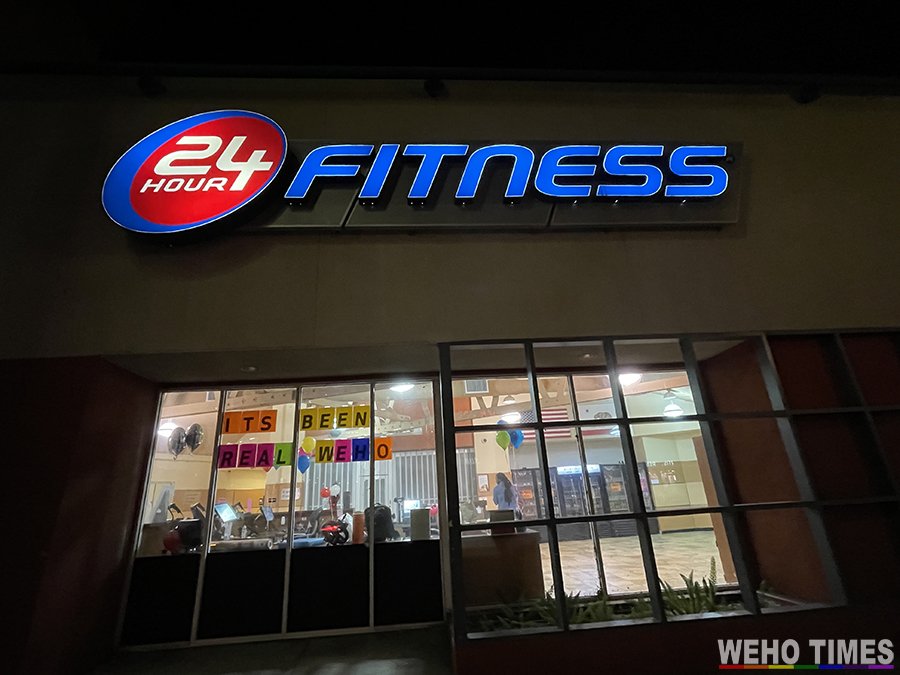 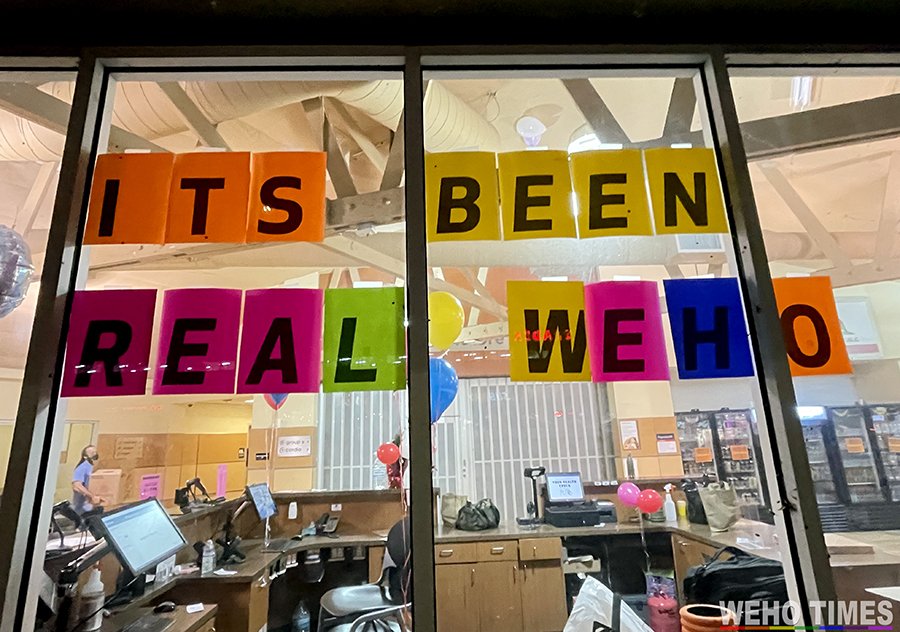 I posted a video on Instagram of a final walk-through I did of the WeHo 24-Hour Fitness gym right when it was announced that the gym was officially closed. The response to the video has been overwhelming. Some readers gave it a good riddance, but for the most part, there is an echo of disbelief and sadness.

I’ve been asked share the video via email or text, “as a souvenir,” one reader said, but the video is too large at about eight minutes long, so I’m sharing it here, along with some photos of the closing night.

The last night at the WeHo 24-Hour Fitness Sport was sadder than I imagined, and it is a night I will never forget. The music was louder than normal. The selection was clearly from someone’s playlist to go with final moments of the gym. They played Madonna’s Celebration, Donna Summer’s Last Dance and Europe’s the Final Countdown towards the end.

The gym was pretty empty, which is not what I expected on its final hurrah. Some members walked up to the main gym floor in plain street clothes, not to workout, but to do a final walk-through and share some memories with other members. 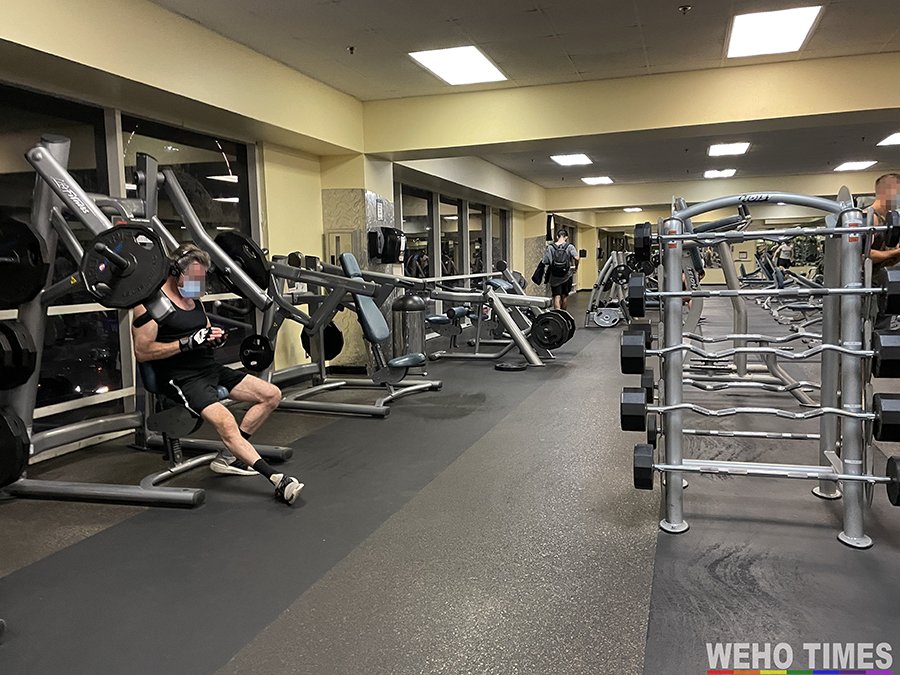 I was there for two hours waiting for the gym to close. I put in a hard workout, and then slacked off and just sort of took it all in for one final moment.

Moments before closing, I found a member sitting by himself in the squat room area located in the far back. “I’m actually quite sad this gym is closing,” he told me. “I’ve been working out here for over 30 years and I can’t believe this is the last day. Everything good in West Hollywood is ending.”

We chatted a bit. I told him I used to be an employee here 25 years ago, but I don’t think he remembered me.

The song Closing Time by Semisonic played right before the front desk guy came on the intercom and said something completely uninspiring: “It is now 9 o’clock and the gym is officially closed. Permanently. Please head to the front and good luck.” 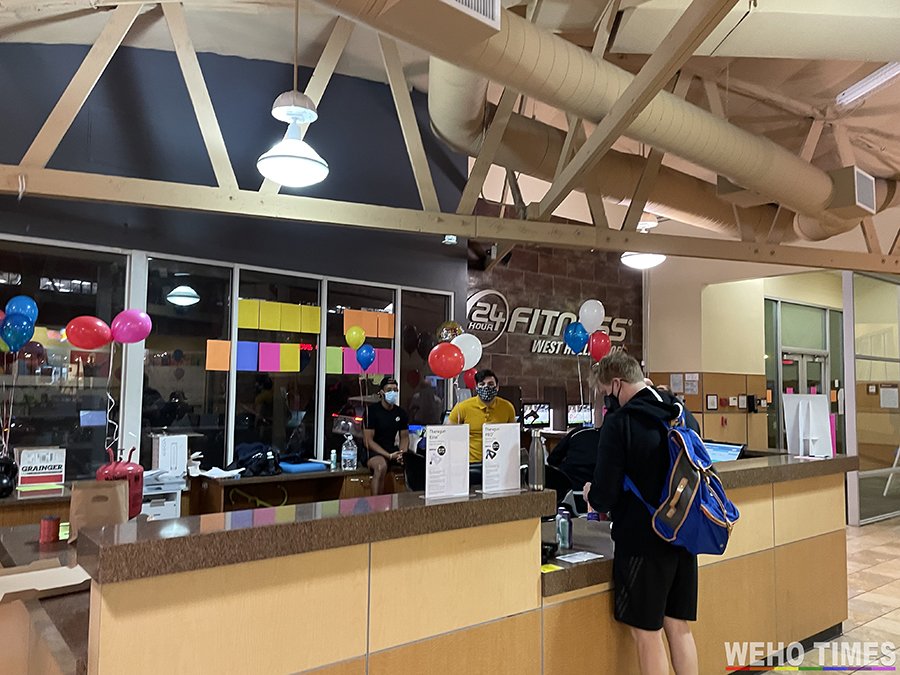 I shot my final exit video, and walked the gym one last time, and THAT’S when it hit me. The West Hollywood 24-Hour Fitness Super Sport gym is gone. The space that I will always remember as The Sports Connection (Erection/Infection), is no more. It made me really sad even though I knew this moment was coming for months. On the one hand, its demise is gut-wrenching, but on the other hand, it took some guts to stay open this long.

What sucks for me is that I don’t really have a gay gym to go to anymore. It’s not something I necessarily need at my grown age, but a gay gym was a choice that I always had and admittedly took for granted.

I plan to keep my 24-Hour Fitness membership, because it’s only $120 a year and I already have an LA Fitness membership, so I don’t see myself joining another gym. If I want the gay gym experience, I’m told I will have to join Crunch Gym on Sunset, but the parking alone is a deterrent, not to mention, I hear it is now crowded as all hell.

I was at 24-Hour Fitness when it first opened in 1995, and I was the last member inside that gym. I mean that literally. I stayed till the very end and then I actually got trapped inside the property.

I shot my exit video and then decided to get pictures inside the notorious men’s locker room area. Of course, I HAD to get photos of the steam room and dry sauna. I stepped outside to the pool area without giving the sign that read “Pool closes at 8pm” much thought. It wasn’t until I tried to step back inside the building that I realized the door had locked shut behind me. 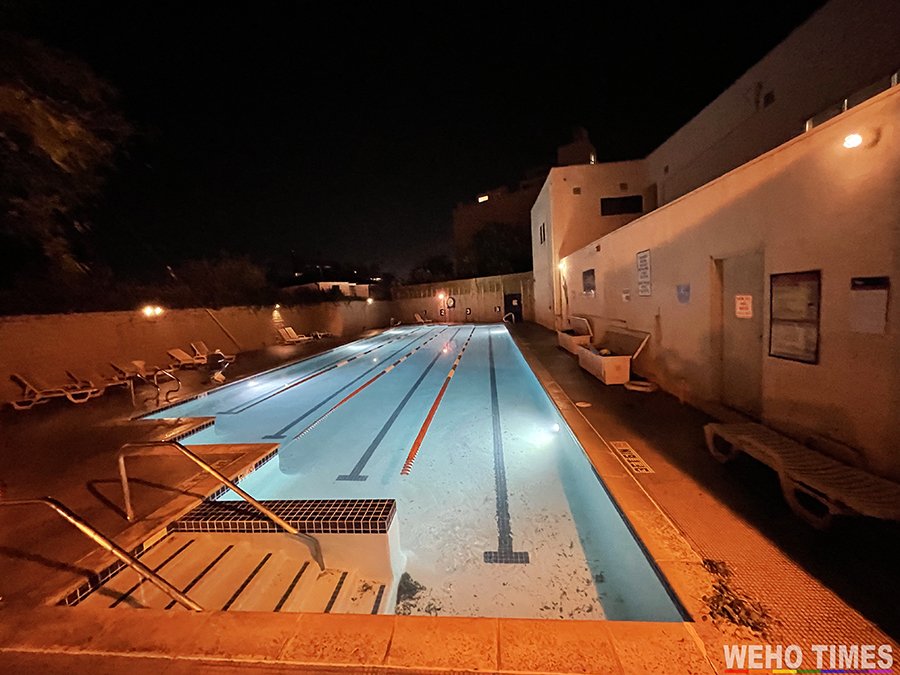 I was locked out of the building, yet locked inside the pool area.

I tried three doors, including the women’s locker room area, and no luck. I pounded on the doors as loud as I could, but no one could hear me.

I tried calling the front desk, but they were closed and not about to answer the phone.

I figured I could climb the fence and just exit from the connecting parking structure, only to realize the parking no longer connects with the gym.

I figured I could climb the back wall and jump into a neighbor’s yard and head towards the street, but the gym is located uphill. I climbed the wall and saw the rooftops of houses below. It was too damn high and too risky.

I pounded on the back door some more, but still no luck.

I’m not event kidding, I was freaking out. What to do? Do I call the police? Do I wait for the cleaning crew? Do I climb the side up the building, onto the old sundeck area, up to the rooftop and cross over to the parking structure?

I thought I could climb the wall by the pool, but there is plywood extending the wall, which was way too high.

Then I noticed the emergency exit door by the end of the pool. It was there the entire time that I was climbing the walls in total panic.

And I set off the alarm in the back of the building–NO!!!

I nonchalantly walked back to the front of the gym where I learned that I had missed a candle light vigil. 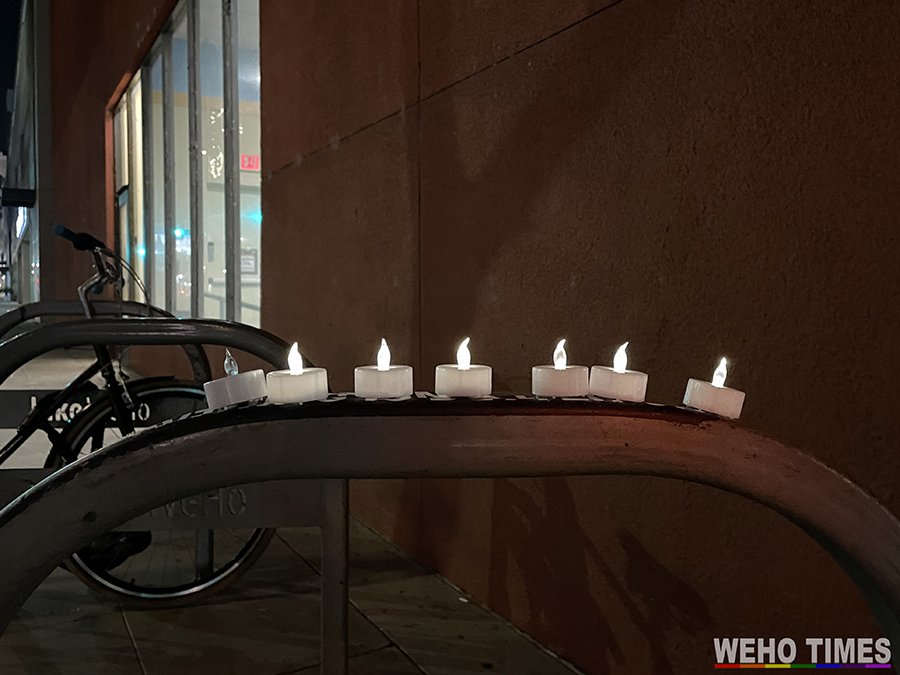 So there you have it, the last night at the WeHo 24-Hour Fitness Sport is a night I won’t forget. I was there to the bitter end. 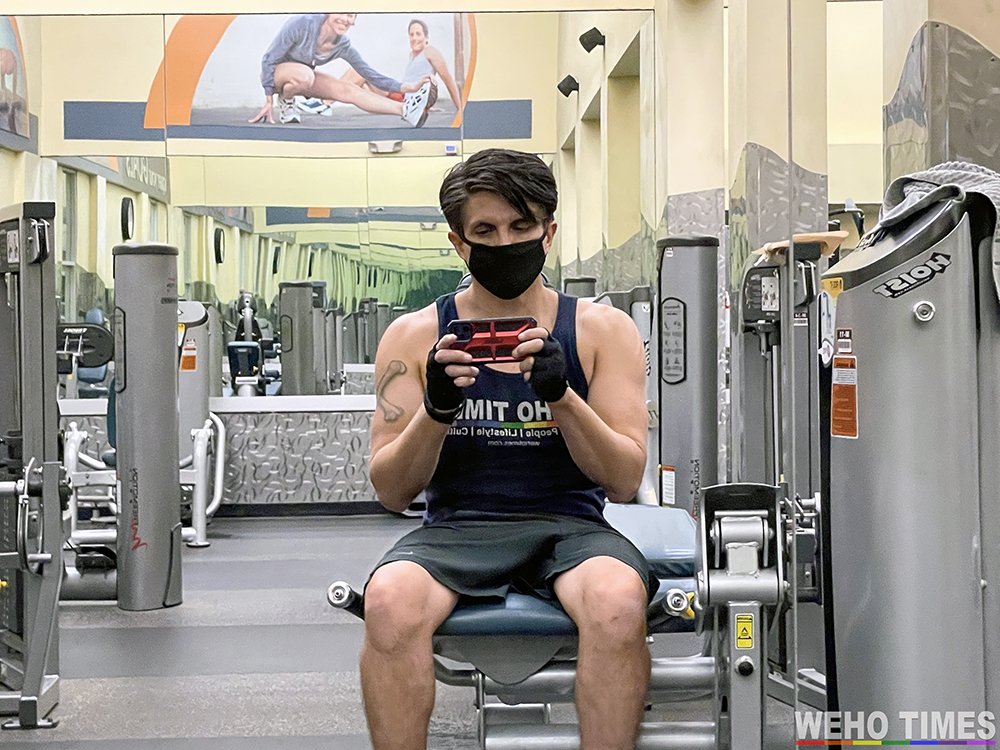 Goodbye trashy gym. Believe it or not, I’m gonna to miss you.

Thank you Paulo and WeHo Times for your sensitive and respectful coverage of this important cultural landmark in West Hollywood history. Although a little bit randy at times, 24 hour Fitness was a nucleus for health, community, recovery and even political discourse. It was an integral part of my own personal recovery and triumph when I was first diagnosed HIV+ in 2012. The thought of 24 Hr Fitness evokes great memories and many smiles. Happy holidays and “have a good workout!”

OK, my previous anecdote might not have been ok. RIP 24 hour.

Hi Chet! Your previous anecdote was perfectly fine! You didn’t give us a chance to approve it. That place was salacious and your story is one of many that reflect that. RIP 24-Hour.